If I am going to listen to one voice of authority concerning the merits of a vintage, it is going to be the soft drawl of Jan Boland Coetzee. And, says this Great Son of the Soil, 2015 is the best South African vintage of the past 50 years.

“Why?” I asked him. Rather predictably he gave me the kind of stare an ISIS commander gives an Israeli immigration official when asked if he’s packing a suicide vest.

Well, just because. It was all just so right. In balance. On the vines, nature did its thing in a quiet and unobtrusively wonderful way. From winter slumber to bud-break to ripening, everything about that vintage was like an orgasmic riff on a tuned Gibson played by a slow-hand guitarist with a pulse just around 45.

A recent ravishing of two South African Pinot Noirs from 2015 proved that, yes, it is a year to look out for – the only problem being that the wines are so damn drinkable now, Job-like restraint is required to see how the vintage matures out.

First up was Cuvée Cinema from Crystallum, the Hemel-en-Hipster side of the Valley out Hermanus way. I have been a staunch follower of this wine since the maiden 2008 vintage, mainly due to its most agreeable dead-plain deliciousness. The style that put Cuvée Cinema on the map remains unchanged. Don’t reinvent the wheel and if it ain’t broke, don’t fix it. Polished. Plush.Bright. Fruit-forward with just a touch of sweet cherryness. This is not so much terroir speaking as it is a cellar wine from a skilled hand, but the quality of 2015 does allow for a few glimpses of natural beauty.

Colour, for one. This Pinot Noir has the most awesome glow to it, a kind of garnet-aubergine-bloodiness that attracted me like a fruit-fly to a fallen burst fig. On the nose the wine has a splendid evolved nutmeg and raisin character, underscored by mulberry paste and low cloud cover.

This is the kind of typical New World Pinot Noir that is not made for small sipping. You drink it in big glugs of swirling wet wine that gushes through your mouth leaving flavours of Clarens cherry, ripped pomegranate and prunes stewed in water sweetened with rose-petals. The zesty acid gives an energetic lift, and the finish is clean and brisk leaving a smile on your mouth and a twinkle in the eye.

The other Pinot Noir was from – who else – Hamilton Russell Vineyards down the bottom end of Hemel-en-Aarde. Here the soils are poorer than a doughnut-seller at a Tim Noakes symposium and the air is uneasy and restless, gusts of sea-wind tugging at man, beast and plant.

The 2015 Pinot Noir shows Hamilton Russell terroir at its best, the clay soils ensuring the wine is muscular, riveting with tense edgy sinews making it truly Old World and Burgundy-like. Shale and shreds of hard earth cracked by climates extreme allow the wine to draw heaps of succulent flavour from the soil, creating a pendulum where ying and yang trade swings in search of balance and that excellent state of grace.

Wild flowers dance towards the nose, backed by a curious, seductive damp savouriness. The palate is introduced to earth and salt, followed by splashes of vivid tastes that make Pinot Noir the unexpected mystery it is. There is some crushed clove scented with geranium oil. 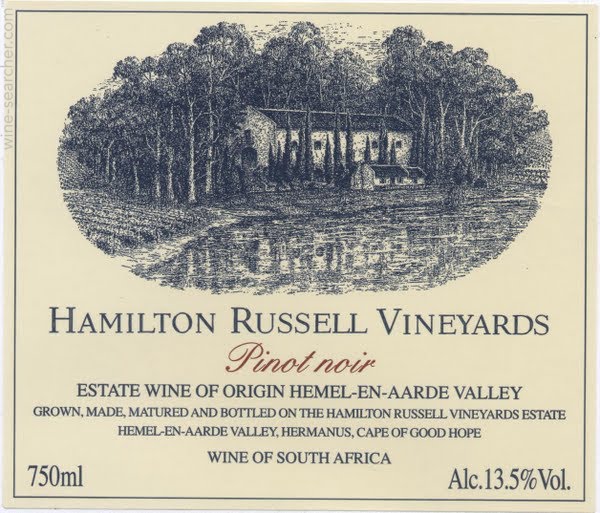 A whole spread of berry flavours, my favourite being the cut cold blueberry and the autumn crab apple. The mouthfeel is all-encompassing, empowering the wine drinker with knowledge and admiration for Pinot Noir in all its splendour. And a just-so note- of porcini hinted at things to come as this wide develops, matures, broadens.