Besides the disturbing alcohol-related tragedies on the South African roads, revellers are prone to various drinking injuries at this time of the year. Some are familiar in an unavoidable, ubiquitous sense and rather domestic in the frequency of their occurrence. Others are in a class of their own, the results of a deadly combination of creativity and numb-skulledness. So far this season I have been made aware, seen and experienced the following, first-hand.

A Champagne or Cap Classique cork can cause considerable physical harm when ejected in an uncontrolled manner, as most who have ever experienced the expelling of said bottle closure can attest to. There is quite a whack of pressure behind that cork, so a firm grip and gentle twist is required.

A baby or irritating relative getting thumped by a misguided cork flying from a bottle of bubbly is quite familiar. But the one that got me recently was a neighbour doing a Lewis Hamilton and shaking the bottle of JC le Roux to increase the pressure before letting the cork rip. Up in the air it went, vertically almost to the point of disappearing. Once gravity set in, however, the cork was drawn to terra firma, falling fast it gained speed and dropped straight into the open snoring mouth of said neighbour’s grand-father who was sleeping next to the swimming pool. A 90 minute operation at Medi-Clinic was required to remove the old man’s denture from the back of his throat.

Almost as dangerous as a flying cork, is a bubbly stopper that just will not allow itself to be prised from the bottle. What normally happens is that the bloke trying to twist the stuck thing out gets frustrated by the lack of success and grabs a sharp object with which to urge the cork free by slipping the blade between the stopper and the lip of the bottle. In a recent exercise in this, the sharp object happened to be a pen-knife, which – you guessed it – snapped back during the edgy man’s attempt to open the bottle, neatly slicing two inches of flesh from his forefinger,

He had to use his left hand to hurl the Mumm through the window.

(Tip: if a Champagne is stuck, attack it with a corkscrew. Once the screw is driven through the cork, the release of pressure allows the cork to come out real easy.)

A long, long time ago all beer bottles had to have the cap removed by a simple opener no self-respecting beer drinker would not have riding in his or her pocket. This habit hardly exists since most beers are now twist-offs. But with the advent of the craft beer craze, many persons new to the beer culture find themselves seeking ways to open bottles closed old style.

A hard table or counter edge is usually okay for snapping off a beer cap, but sometimes the holder of the beer bottle gets too clever for his or her own good, especially when there is a crowd around. 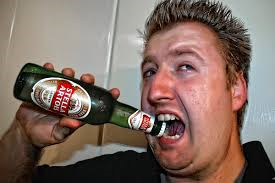 So we have Brutus Beerus Maximus attempting to bite off the metal beer cap with his teeth. Well yes, this is done by old bar farts who have had the time to practice. But seeing a handsome, healthy young man stumbling around with a bottle of craft beer in one hand and a large white, broken incisor in the other whilst bleeding profusely from the mouth, is not a pleasant sight. Even for those prone to ultimate schadenfreude.

Then, of course, there is the toughie who has seen too many Australian biker movies and must open the beer bottle in the eye-socket. This happened at Pringle Bay this year, and if you see a butch-looking middle-aged lady with her Darling Brew eye-patch, don’t ask her what happened. Just a hint.

These are currently all the rage, but besides injecting a huge sugar rush there are some things to take into account as you immerse yourself in the cocktail culture.

Flaming cocktails add drama and danger, and who does not love a Bailey’s Comet, Flaming Lamborghini or some retro Sambuca with blue flame dancing on the surface. Thing to remember is, flames generate heat and a cocktail glass is a fierce attracter of high temperature. So be aware – first instinct when picking up something that burns your hand is to drop it. Once spilt, your funky flammable alcoholic drink can become a veritable Molotov cocktail, the fire running all over the place and burning persons and objects at random.

This recently led to an incinerated iPhone and a blistered female arm at a bar at De Waterkant. Upon which the barmen made the spiller a Flaming Asshole cocktail, on the house.

Ice plays a major role in many drinks, but I thought I would fit this one in here as it is Mojito related. Romeo and his maiden were making their own crushed ice by whacking ice cubes inside a tea-towel with a bread-board. Their method proved a real treat, and when the third Mojito started working its magic, Romeo and Maiden disrobed and got down to some serious hanky panky of the playful kind.

Feeling especially adventurous in the 39 degree Cape Town heat, he decided to coax his lady’s nether regions with some of the cracked ice. Unfortunately one of the pieces had been rather roughly splintered and after being slipped inside the thrashing lady’s cocktail blender, the shard of hard ice did some unpleasant and painful internal damage before melting.

My doctor friend who attended to this incident showed grave concern, conducted himself with total professionalism and – along with his bill – sent the couple a Christmas gift of a manually-operated ice-crusher, plus a vow of silence. We hope the ice machine worked.