The Black Marlin is by no means previously disadvantaged. In fact, 35 years ago the only thing that matched this restaurant’s magnificent location on the turquoise waters of False Bay was its ability to deliver the finest, best and freshest seafood on the Cape Peninsula. The other places that could remotely compare were the Harbour Café and Camel Rock – in terms of marine cuisine, perhaps, but not in scenery.

And yes, sitting under an umbrella, staring out across False Bay from its west-side, the Black Marlin still gives good location. On a fine day the sky is endlessly blue, accentuating the deep dark depths of the ocean upon which charming fisher-folk drift on boats as they offload their catch at adjacent Miller’s Point while hurling quaint, colourful and decidedly Cape expletives about each other’s mothers, their neighbours’ aunts and brothers’ dandy stepsons.

Whilst inhaling this view, a slight breeze from the east brings the life-affirming scent of salt, kelp and washed shells in which tiny creatures have lived joyous, happy lives. Sip a glass of Chenin Blanc whilst experiencing it all and the sea looks bluer, the sky bigger and the sun more golden and bright. 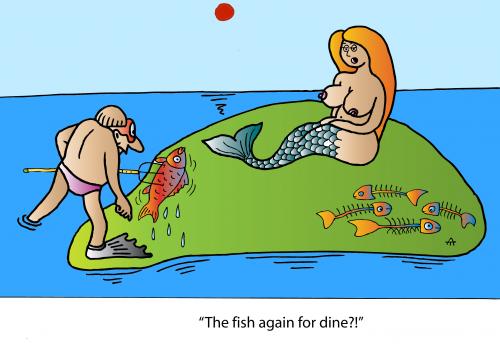 Location and scenery might last forever, but that other useful element in a restaurant’s offering – namely food quality – does not.

The Black Marlin’s menu still specialises in stuff from the ocean, increasing my expectation of having a seaside-sharpened appetite satisfied by simply cooked portions of finned scaly creatures. The starters includ mussels, fish cakes, lobster bisque and seafood chowder, with chicken livers peri-peri and snails thrown in for those in a more landlubber-ish frame of mind.

Having dug into a bottle of zingy Fleur du Cap Chenin Blanc, my perky stomach acids were crying out for some oily sardines. The other half of the table played it conventional and opted for prawn spring-rolls.

A gaggle of foreign-voices rose from a group of tourists climbing out of a bus, a horsy female tour-guide, all badged and Jolly Hockey Sticks, leading the 30 or so visitors to one of the long tables that had specially been set-up for them. Two other groups followed in quick succession and underscored my observation that the Black Marlin was either popular among tourists, or a venue forced upon them by sellers of package-holidays.

But with this quintessential Cape view, why the hell not?

Our starters arrived about three minutes after order. The spring rolls seemed to be, well, spring rolls. But surely these two things before me were not sardines?

I bent lower, looked harder, and yes, there they were. Under a pasty, grey-yellow batter I saw things that could well have originated from a marine animal classified under the species of fishes. A little tail curled out of the pus-like crusty batter, and at the other end was what looked like a dull yet terrified fishy eye.

And when I ripped the creature apart there was, indeed, a backbone and some whitish flesh, just as a sardine would have had had it not been incinerated and battered beyond belief. But hunger is the best chef. So I tore into the fish with wanton gusto, tasting salt and batter and a spiciness that had been added to give flavour to what were tired, old sardines that had possibly been caught in the previous millennium. Otherwise they had been purchased from that local supplier of putrid seafood called Breco.

For the purpose of insightful observation I scored one of the prawn spring rolls from the plate opposite mine. If these were spring rolls, I’d hate to see the ones emerging from the depths of winter.

This roll had a dense, chewy crust that initially refused to give way under knife nor tooth. My personal and trusty Laguoile blade did the trick, eventually sawing through the rhinoceros-foreskin and revealing the contents of minced prawn drifting in a runny, oily puddle. Taste that.

Next door, the tourists were digging into their meals. But being of German and Dutch origin their requirements could not have been of a high culinary standard, although the men were eyeing the ebony calves of the waitresses with a palpable keenness.

Main course offerings were pretty standard: calamari, catch of the day, mussels and fish cakes. But something, unexplained till this day, dragged me to the Black Marlin Speciality.

Said “Speciality” saw cubes of hake wrapped in bacon, set upon a skewer and grilled. It was served with garlic butter sauce and – as requested – a portion of chips.

Fish accompanied by the cured or smoked flesh of the pig is no new thing. But when you visit a specialist seafood joint, you want the pig to enhance the flavour of the fish instead of acting as a deterrent to the mediocrity thereof.

Fortunately these traits could be hidden under the overpowering smoky bacon, just what they are meant for in this instance. Gorgeous chips, though. Sloshed with vinegar and heaped beneath salt, they were the highlight of my meal.

The other side of the table had commanded fried calamari rings which were, unfortunately overcooked to a rubbery toughness that not even Linda Lovelace would be able to chew through.

But the food is cheap and delivered briskly. The view across the bay fantastic. The beer cold and the wine all Capey freshness.

Forgiveness is a virtue, and empowering. Once.