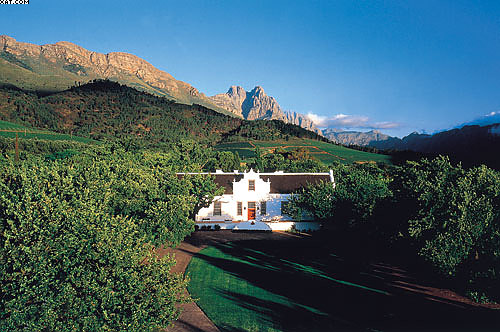 Drooling with history, heritage, culture and all those x-factors classic wine industry marketing requires, Stellenbosch’s Lanzerac brand keeps a relatively low profile. Its setting at the beginning of the Jonkershoek valley is majestic. History goes back to 1692. Aesthetically the Cape Dutch “Prag-en-Praal” hotel and winery is crisply colonial enough to have a UCT pink liberal itching for his dung-bucket. And colourful moments in Lanzerac’s wine legacy include its name as the first ever Pinotage bottling anywhere, circa 1959.

And as anybody who studied at Stellenbosch before the 1990’s will recall, the name Lanzerac will always be synonymous with cheese-lunches, day-long bouts of vinous enjoyment on the long stoep. Legend has it that those stone lions next to the steps at the northern entrance would roar each time a Stellenbosch student who was still a virgin walked past, and I believe silent they are still.

The wine legacy runs deep, too. The pot-belly bottles with the funky pink labels are part of South African wine heritage. And so serious are the hotel-winery’s current owners that they have bought back hundreds of this old stock which had been lying in the caves of Distell.

Hopefully a stronger focus on the wine culture of Lanzerac, coupled with a marketing strategy to re-establish it as a South African icon, will see the name pluck back the reputation it justly deserves. Because as a destination it is right up there, and under cellarmaster Wynand Lategan the current wines are truly splendid.

In the heat of summer past I chanced upon the Mrs English Chardonnay which is a magnificent addition to Stellenbosch’s stable of excellence from the great Burgundian white. Now, with the cold fronts eventually reaching the Cape and the northerly wind howling through Stellenbosch’s bare oak trees, a Lanzerac red wine presented itself which is my red wine of the year so far.

The Lanzerac Le Général is named after Charles Lanzerac, a French military legend who was a friend of Katherina English, owner of the farm at Jonkershoek. The friendship must have been a bit deeper than tea and crumpets as it was Mrs English who in 1914 chose the name Lanzerac to replace the very Cape-sounding Schoongezicht.

Despite having a grand South African wine farm named after him, turns out that 1914 was a bad year for General Lanzerac. For shortly after the outbreak of World War I he was relieved of his duties as commander of the French Fifth Army after arguing with a superior over the number of Krauts rumbling into Belgium and the French forces’ ability to deal with them.

But Le Général Lanzerac deserves a wine named after him. He was a formidable military strategist, a brilliant lecturer for potential French officers and by all accounts quite a character. Records show General Lanzerac as refusing to learn any English besides “beautiful woman”, “kiss me quick” and “beef-steak and potatoes” as “these are the only English words a Frenchman needs in the world”.

It is also most appropriate that the wine Le Général is a blend, as our Henry was known for his dark features. Being born in Caribbean Guadelope and knowing the renowned amorous colonising strategies of the French, the General probably had a bit of the Creole tar-brush thrown into his stern military make-up.

Now, there’s a lot of talk about South Africa straddling the Old World with the New when it comes to wine, but crystal clear examples are as few and far between as a goose-step on the Sea Point promenade. Le Général has it. Text-book stuff.

The Cabernet and Merlot elements bring all the classical, restrained power one has learnt to accept from Stellenbosch. Firm, yet supple tannins. Tuning-fork precision, from when the wine hits the palate until its last dainty farewell kiss at the finish. Red fruit, pine-needle and the taste of freshly spilt blood. Iron-like.

But then the real sexy stuff takes over, namely ripe and spicy Shiraz with the individual power of really fine Pinotage. This adds dimension to the wine, covers the classic statuesque elements with a velvet cape smelling of fine Cuban cigar, spilt Armagnac, rosewater and potpourri. An immensely appetising juiciness takes hold of the wine, creating a heady rush of deep and fulfilling red wine pleasure.

And judging by the wine’s flawless structure and discernible – yet accessible tannins – Le Général is set to bring more firepower in the future. Great wine, huge, and a classic in the making.

So it’s not tonight, Mrs English. I am doing the General.