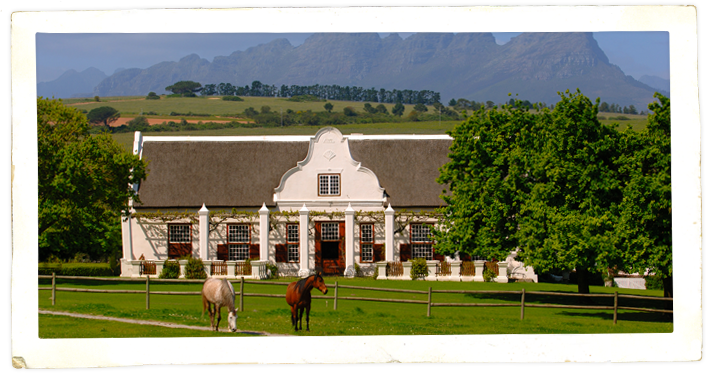 Despite the centuries of blue-blooded Cape wineland culture resonating from its splendid buildings and vineyards, there is something wild and sparse about Meerlust that intrigues me. As if the entrance gate next to the dam is a frontier post, beckoning those who have crossed wild, unwelcoming terrain from Cape Town and is now about to take the first steps into the amicable palm of Stellenbosch’s wine region.

There is no mountain on the hallowed turf, but an all-encompassing view of the Helderberg stands blue and rugged from Meerlust’s gentle slopes. At places, the ocean is only four kilometres away, a persistent breeze creating a climatic capsule vastly different to the rest of Stellenbosch, perhaps only shared by Faure and neighbouring Vergenoegd.

A quick glance at the vineyards reveals decomposed granite and clay soils and plants which though not gnarled and withered, are firm and adult. It is Cabernet Sauvignon country. Of this there can be no doubt.

Just as is the case with Kanonkop’s relative youth, it is hard to imagine that the harvest for Meerlust’s first bottled vintage, a Cabernet Sauvignon, happened only 40 years ago. This for a farm with a history dating back to 1693 and which is today inextricably linked to the South African wine industry. Meerlust is a name that – like Rust en Vrede, Groot Constantia, Vergelegen and Kanonkop – defines the local industry’s all-important classical roots. For heritage and class never go out of style in the wine world, a fact not to be forgotten. 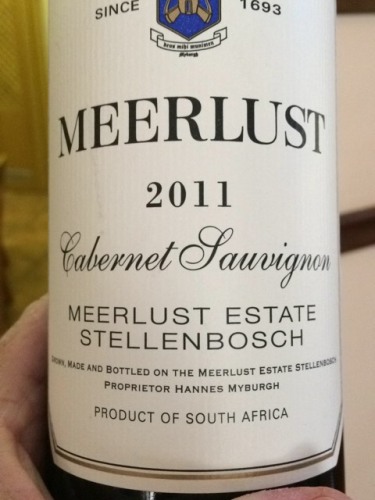 The farm’s latest release of Cabernet Sauvignon, the 2011, shows that the irrefutable class of Meerlust as a place and setting is most definitely also reflected in that which it puts into the bottle.

There is a distinct variation in the style of Cabernet offered by the terroirs of Helderberg and Simonsberg, and Meerlust does not fit into any of them. The relative lowland flatness of the terrain, a constant 360 degrees exposure to the elements and the proximity to False Bay provides a wine with a style all of its own.

The Cabernet Sauvignon 2011 is a spot-on example of this individuality. The steely robustness of the Simonsberg is not evident, nor the plush layers of Helderberg fruit. But it is a Cabernet of supreme complexity, coming at you from both sides. Like being tackled by Duane Vermeulen and then resuscitated by Florence Nightingale’s more attractive sister.

The wine’s entry on the palate reveals a layer of cool tannins and a tight grip which has always been evident of Meerlust reds, loosening as the wine gets older. Once on the mid-palate, the story broadens. Here lie those floral elements that were shown on the nose. Also, a thin line of cassis, dark and foreboding, which becomes more revealing and audacious with a bit of age in the bottle.

All classic and old school elegance, but with an extremely attractive character embodying both power and charm. This Cabernet Sauvignon will always be, for me, one of individuality and great style. Along with the other Stellenbosch greats proof that this is King Cab Country.

An older classic red recently popped was a De Toren Fusion V from the 2003 vintage, a comet one. Like Meerlust, De Toren is on Stellenbosch’s edge, its turf also low and exposed to False Bay.

The Fusion V 2003 had aged well and was in fine shape, although the Bordeaux blend’s dominant Cabernet Sauvignon character had been chiselled away by time, with Monsieur Merlot coming to the fore. This made for a velvety texture and a heady perfumed character not, in my experience, associated with younger Fusion V’s which are randy and brimming with an interesting arrogance.

With the Cabernet now playing second fiddle, the dominating Merlot element showed red fruit and savoury, wrapped in a quiet silkiness you just wanted to pluck away to see what’s underneath.

It’s all happening in Stellenbosch, but never lose sight of the fact that there is greatness all around.