The definition of a culinary colonialist is someone who, looking-up from the rocket salad, opines hot curries be all heat and no flavour. Instead of just admitting that he or she is a namsy-pamsy with a molly-coddled palate unable to stand a bit of heat, the respective commentator will throw around killjoy lines such as: “A hot curry is not a curry as too hot a spiciness suppresses the flavour of the food”. 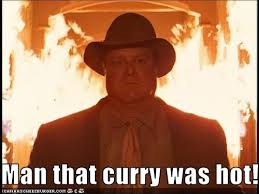 As a result, real curries – Indian, red-hot, sweat-inducing – are being eschewed by foodies. Instead we get these horrid Thai things which taste like a coconut milkshake with a hit of chicken stock, or those precious South African Malay concoctions calling themselves curry. In the latter, turmeric is used to create a luminous yellowish plate of food flavoured with a few spices stuck in a sickly sweetness. If Peter Pan or Boy George wanted curry, this would suffice. But truly, a Cape Malay curry is as close to the real thing as Justin Bieber is to getting a starter place in the Auckland Blues.

A real curry is reddish black. It has a rich, warm and exotic aroma. Upon entering the mouth you get a whack of flavour from the respective meat or vegetable, allowing you to chew and savour. Only then, after the subject has been chewed and appreciated does the burn kick-in. Not one of those showy front-of-mouthy burns found in wasabi or red Thai chili. But a deep, satisfying fire accompanied with loads of cardamom and curry leaves, a burn you feel from your heart to your groin, a burn making your scalp sweat, your pulse quicken and your contact lenses float in a sea of tears induced by joy and pleasure.

This is food at its most reactionary, food that moves and affects, grabbing the emotion as much as it does the senses. It is food known to giving decrepit old men the semblances of a semi hard-on, as well as making old ladies uncross their varicose-veined legs at the annual Bowling Club luncheon.

Curry is the food of the gods.

I was, however, floored once. London. Just off the King’s Road after a Chelsea-Leeds match and about nine pints of lager. At this stage of a Saturday night in London one normally has two options: either to find a few Leeds supporters to engage in a bout of chip-shop violence, or a hot curry. I went for the curry.

The place was more Indian than a fake Rolex, small and smelt heavenly of spice and baked nan and incense. Always one for a vindaloo – the legendary hot curry from Goa – I opted for the dish on the menu known as Foad Vindaloo. I had never heard of Foad – nor India, for that matter – but vindaloo is vindaloo. Lamb, please.

The dish arrived in an authentic earthenware bowl. Pieces of aromatic lamb, dark from spice, lying in a pool of equally black gravy. My jowls drooled.

“Any yoghurt or cucumber salad with that, Sah?” the small brown waiter asked. I declined, but ordered another beer.

Then I took a bite.

This vindaloo reminded me of my university days as there was no foreplay involved. No teasing hits of spiciness hinting at the prospect of a hotness which could possibly follow.

It was heat, man. All heat.

I had swallowed a live, glowing chunk of Mount Etna Lava. I had downed a pint of Tabasco sauce to which a handful of melted lead had been added, I had licked the Devil’s red hot fork from the bottom up. My tongue and the roof of my mouth felt as if they had been scraped raw with a blunt, rusted cut-throat razor and something had opened-up a hole in my throat with a WW1 relic. I swear I could taste blood. 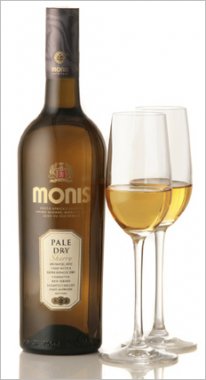 But I was not going to give up, despite the fact that my shirt was drenched with perspiration after one bite and I had to tie a Chelsea-bandana across my head to act as a sweatband.

This was the vindaloos of vindaloos, the Thor of curries.

My dish was emptied, though, and the waiter appeared. Gasping, sweating, I had to ask him about the Foad vindaloo. For if I was ever going to go to curry cooking school in India, I was going to go straight to Foad.

“Where exactly does Foad vindaloo come from?” I asked the waiter as he poured beer into my glass.

“That vindaloo I had, it was quite hot. But I have never heard of Foad in India before.”

The waiter picked my plate.

But what to drink with hot curry?

Riesling is recommended due to the ability of the acidic sweetnesss to stand-up to the burn. However, I have found the perfect match: dry Sherry, especially something in the style of Monis Pale Dry. This is dry and fresh, crisp and pert, but with a thread of fruit-purity to assist flaming a lovely and really hot curry.

Keep it spicy, keep it real.

One thought on “Some Like it Hot, and Only Hot”