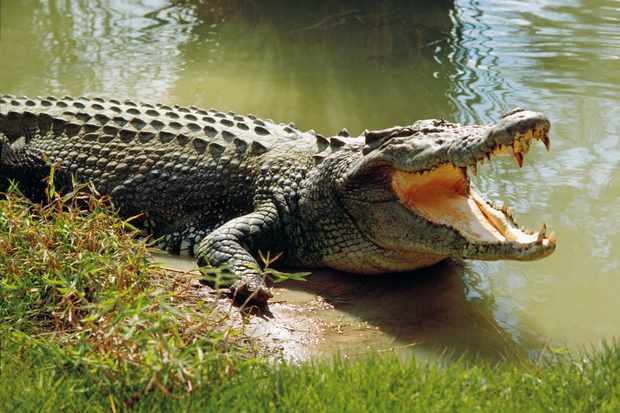 Our food-writer Earl Dexter on crocodile. It’s ugly, but you can eat it.

I jumped into the crocodile pit, fearless and hungry. And probably very stupid, too.

Initially the idea was moral and worthy. Namely to bond with the living creatures I would be cooking in my quest to pursue the culinary higher ground for my readers. Once I hit the grass-lined embankment of a green pond to be met by a few hundred pairs of unimpressed crocodile eyes, I immediately considered submitting my resignation and asking the editor to be transferred to this blog’s section for Rosé Reviews.

Crocodiles are scary mothers. They have cold yellow eyes. Their menacing teeth hang over scaly, bony jaws. Prehistoric tails wait to propel those reptilian bodies through the murky waters where death awaits for any other creature unfortunate enough to be on the other end.

And I had to try and tell these guys I was about to cook and eat one of their brothers?

But then again, I don’t think these crocodiles give a gecko’s butt what happens to their family members. They are cool and calculated, and seemingly entirely devoid of any emotion. Those persons who have seen these monsters dragging a cute little impala calf under the water, bringing the little animal’s whimpers and pathetic struggles to an end with a bite through the neck, will know what I mean.

Then the crocodiles looked at me. I heard a snort. They all crawled hastily towards the dam and slid into the water leaving me on my own.

It must have been last night’s garlic pizza.

There was, however, a slow-coach among the thousands of murderous crocodiles. Using all the skill I could muster and my ancestral desire to tame the wilds, I pounced on the vicious, snapping, hissing reptile, wrestled it to the ground and subdued the overpowered creature with pride.

Okay – so this croc weighed a full four kilograms and was about the size of a newly neutered Dachshund. But even Crocodile Dundee had to start somewhere.

After interrogating this croc for a few seconds, it told me where its mother was. Then I commandeered the troops to find the matriarch, dispatch it and bring me the meat for some crocodile culinary concoctions.

So what does it look like? Croc meat is very white and clean looking. Not so clean smelling, but clean looking. Steaks are cut from the tail. Some people go bananas over the ribs. Once skinned, the body offers goulash cuts. But this is no time for haute cuisine. How the hell can you be serious about cooking something that looks like a cross between a lizard and Jurassic Park?

I am, however, going to start with a rice dish made from smoked crocodile. It was going to be nasi goring, but I decided not to call it thus, despite certain similarities.

Get a kilogram of smoked crocodile that has been sliced in strips. Four tomatoes, chopped. Salt and pepper. One tablespoon of Tabasco. Six bananas.

Add the rice to some salted water and start cooking this.

In a pan, fry the smoked crocodile in some oil. After a few minutes the crocodile meat will have taken on an appetizing grey colour. Now add the chopped tomatoes along with a glass of dry white wine.

Turn down the heat and let the dish simmer until your rice is cooked and soft. Once this happens, add the rice to the pan filled with the crocodile mixture. Stir the rice through the meat and tomatoes and let it cook through.

In another pan, heat a tablespoon of butter. Slice your bananas lengthwise and fry them in the butter until they are golden brown.

Time to dish up! Scoop a heap of croc rice onto a plate. Place a fried banana on each heap. This adds a delicious sweetness to a rich dish.

Vino: Rich Pinotage, such as Neethlingshof 2018, elevates the dish to a thing of wonder.

Croc spring rolls are a delicious little snack, or make a hearty meal if you procure a whole heap.

For this you need:

Veggies, shredded: Use spring onions, cabbage, carrots, but whatever is in season

Volumes depend on the number of spring rolls you intend making, but you need about four tablespoons of mixture for each roll, so use your noggin.

Quickly stir fry the croc meat in hot oil. Add the veggies and oyster sauce and stir a little longer, till veggies wilt. Add seasoning, take off of stove/fire, and stir in the shredded ginger. Let mixture cool. Using ready made spring roll dough, roll individual spring rolls according to instructions on packet, coctail size or bigger according to your requirement. Store in the fridge or freezer. Deep fry the spring rolls in hot oil just before serving (defrost first, taking care not to cook the dough if you do this in the microwave). Remove from pan with slotted spoon and drain on paper towels. Serve hot, with a sweet chilli dipping sauce on the side.

Mrs Ball’s Chutney is also great with these munchies, or try atchar. 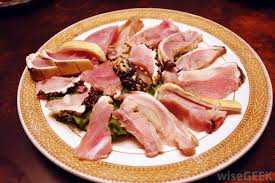 For the well-being of the crocodile, that pre-historic tail is very important. This is what silently propels the animal through the water, allowing it to massacre buck and cows and making it the kind of creature you do not want to encounter on river-based laundry days in Africa.

The croc tail is also a source of thick white flesh. And once it has been deboned, you are left with glistening white steaks. They can be marinated and braaied, but I prefer the following, for four:

Cut yourself four croc steaks, each weighing between 150gm and 200gm. Remove the fat as this is bitter.)

Heat two tablespoons of butter in a pan. Fry the steaks for five minutes on each side until they are a golden brown and firm to the touch.

Now, being a fellow sufferer of bloodlust, I know you are a medium-rare, three-minutes-a-side steak person. However, croc meat is devoid of blood and tangible fibres. When rare, it is gooey and slimy and not very enticing. Try it if you must – I just don’t like it like that.

Serve the steaks with tomato salad and some green stuff, like peas or string beans.

Vino: I’m going Chardonnay, wooded. A lovely Chamonix 2018 will do the thing.