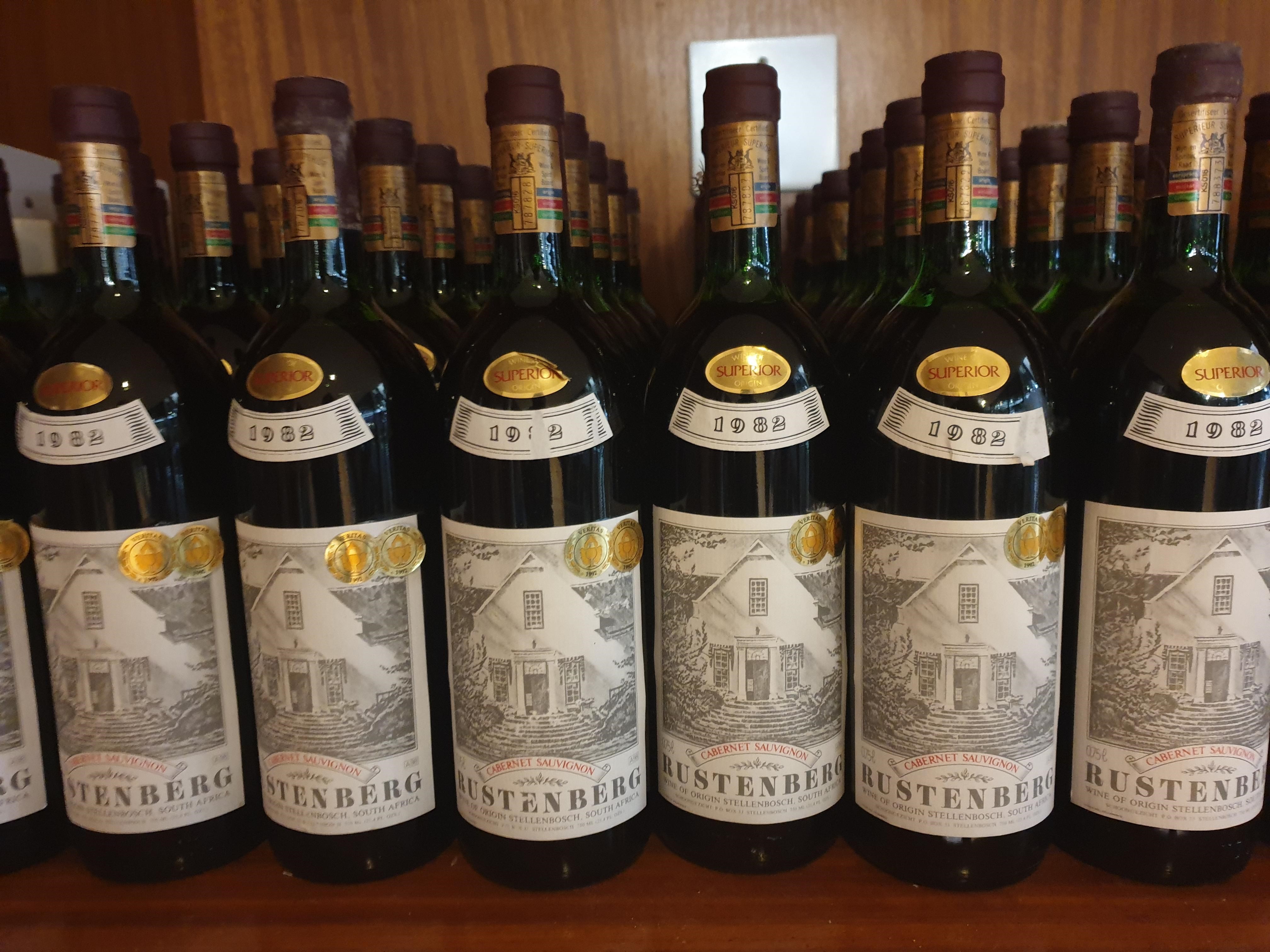 The resurgence of old(er) Cape wine goes ahead unfettered, garnering greater interest every month. More is being written about and spoken of wines from the 1960s through early 1990 than ever before. Only ten years ago these wines were scoffed off as “pre-democracy”, “old school” and “Afrikaner ox-blood”. Now, 30-year-old hipsters with “Swartland Forever” tattoos admit to being willing to swop a crate of beard-grooming oil for a taste of a 1974 Nederburg Cabernet Sauvignon and their complete collection of Goldfish CDs for a bottle of GS Cabernet 1966.

For it has kicked in, this fact that one of wine’s most valuable attributes is that despite the copious offerings from 700 producers clogging the e-mail in-box, some-time or another the scarcity factor sets in. Today one is spoilt for choice when deciding to corral a spread of wine, even from the most fashionable modern cellars. But the more you get into wine, the edgier one becomes at discovering you missed out on the great older wines being spoken of. And you want in.

In the hallowed halls of great South African wineries, Rustenberg Estate in Stellenbosch commands an extraordinary place. If you want old, well, it does not get much more historical than Rustenberg. Established in 1682. First wine bottling 1892. In the early part of the 20th century, Rustenberg’s then neighbouring farm Schoongezicht was owned by John X Merriman, Agriculture Minister of the Cape who went on to become the Colony’s Prime Minister. Merriman’s sister, Charlotte Barry, owned Rustenberg next door. 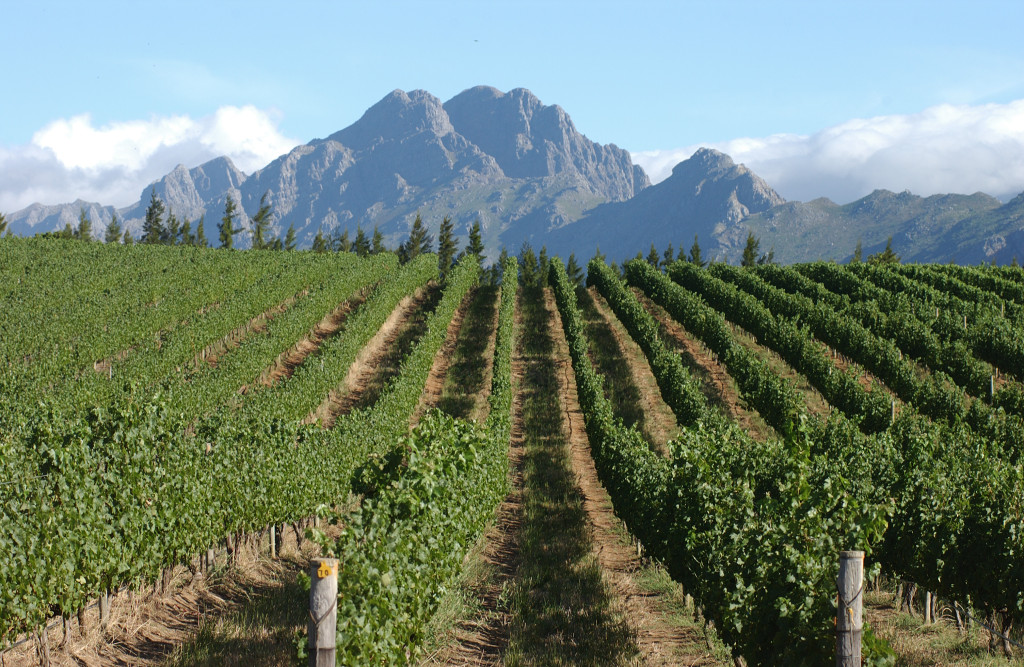 Set on gaining experience in agriculture and pursuing quality in wine rather than quantity, Merriman replaced Schoongezicht’s older vineyards with new plantings. Peter Barlow, who bought Rustenberg in 1940, acquired Schoongezicht in 1945, amalgamating these two incredible Simonsberg properties into one 1000ha spread of mountain, oak-trees, pastures, magnificent Cape buildings and, of course, vines.

With the advent of South African consumers’ enthusiasm for wine in the 1960s and 1970s, Rustenberg was well-poised to become one of the best-known and reputable brands. This it did, mainly through the Dry Red, a blend of Cabernet Sauvignon and Cinsault, as well as a deep garnet coloured Rosé made from Cabernet Sauvignon.

Today Rustenberg remains one of the jewels in South Africa’s wine crown. Current owner Simon Barlow manages the farm with the disarming ease befitting a country gentleman, letting the noble earnestness of the land, gardens and buildings speak for themselves. Which the wines also do under the stewardship of son Murray, who is in a quiet and diligent manner, becoming one of the Cape’s most astute winemakers. Cabernet Sauvignon and Chardonnay, well, if you want a taste of South Africa’s best, the Rustenberg label will ensure you get it.

The formidable vinous legacy of Rustenberg came to the fore this week when an opportunity arose to taste Rustenberg Cabernet Sauvignon from the 1982 vintage. The occasion was the Barlows’ request to have 200 bottles thereof recorked, adding value and extending the posterity. I thus hitched a ride with the Amorim Cork Recorking Clinic to Rustenberg’s cellar, and pretty-soon found myself alongside a long table in a room filled with the heady, almost feral scent of red wine.

Recorking older wines requires extracting the current cork and adding argon gas to the bottle to prevent oxidation. The good part comes when inspecting the wine to gauge its state of age. Wines passing master are then resealed with a brand new Amorim cork, every recorked bottle being logged into computer to validate authenticity.

For those few hours, all of us tasting the developed Rustenberg Cabernet Sauvignon 1982 were world-experts on this specific wine. Looked through the window, and saw greatness.

Along with 1984 and 1986, 1982 was the finest year for red wines in the 1980s, which is vindicated by the superb health the Rustenberg Cabernet Sauvignon from that year is showing 38 years later. Wines can also only age if grown on the correct site. And being Simonsberg Stellenbosch with well-drained decomposed granite soils and enough raw climatic exposure to create power and energy in the vines, Rustenberg sure does have the right geographical fingerprint.

To start, the Rustenberg is fresh as tomorrow’s dew, with not an iota of oxidation or portiness on the nose despite all those years in the bottle. Aromas are delicate and fragile, potpourri coming strongly to the fore with just an ever-so-slight whiff of cigar wrapper and wet pine-needle. 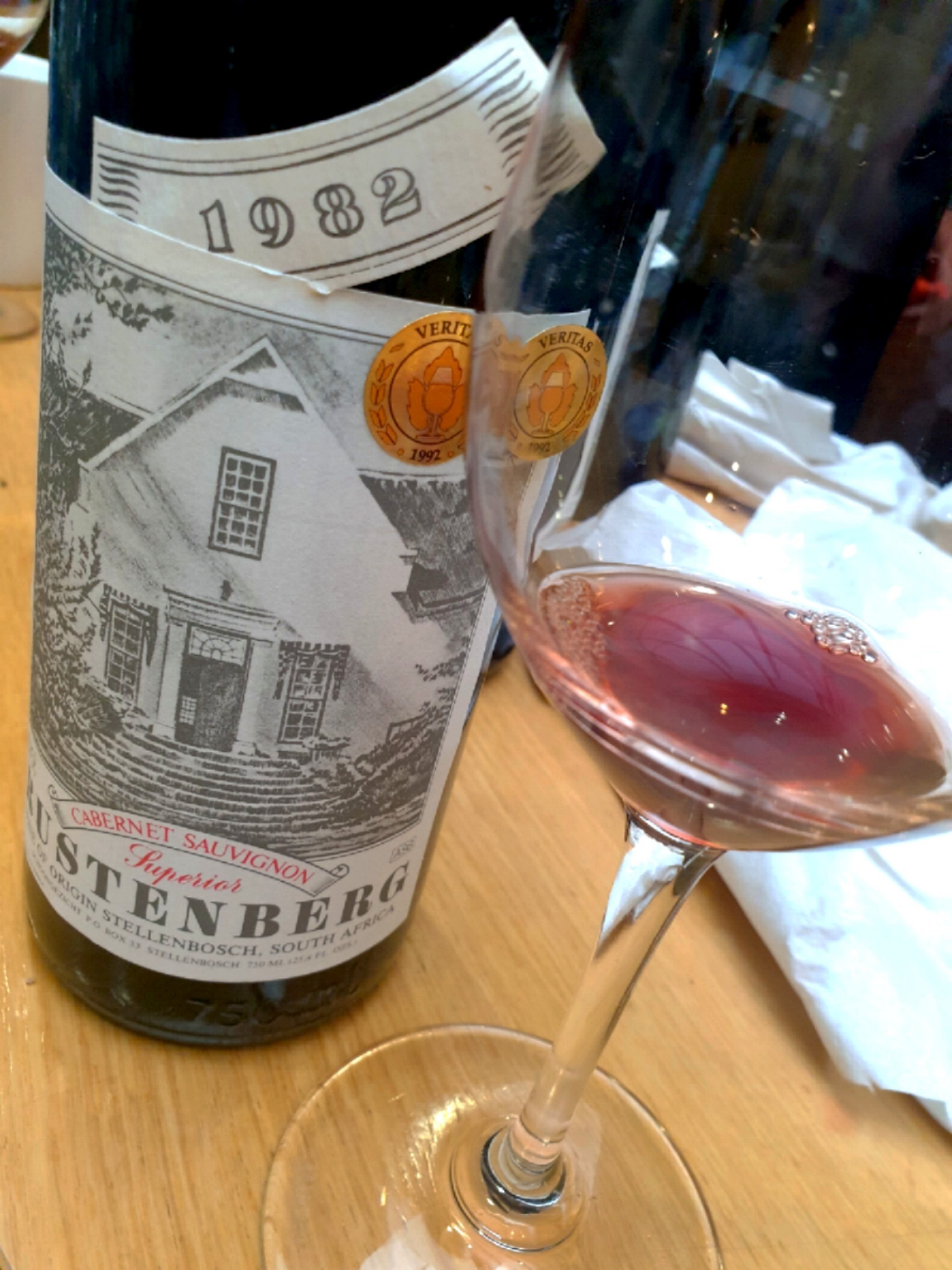 The attack on the palate is invigorating and eye-wateringly refined. One can simply sense greatness, the delicacy of the well-aged wine noticeable with enough life and charisma present to politely introduce you to beautiful things. There is some blackberry-fruit to offer a summery lift, with a hit of just-ripe plums to offer moreish drinkability. But sip slowly, for the attractive laugh-lines of age have left some memorable features on the wine. A taste of red Chinese apple-skin marinated in citrus juice. Turkish fig-paste and wet tar. Some cured meat savouriness on the finish with an all-round perfect cool acidity driving a sense of amazement. The finish long and just the right length for creating memories.

The more old Cape wines we find capable of doing this, the sounder the soul and the foundations of the industry will become. Because we’re worth it.

3 thoughts on “Working with the Living History of Rustenberg”