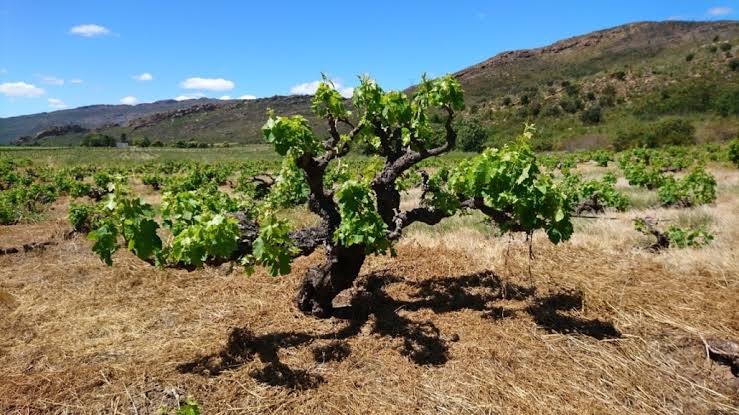 The wine industry tends to change trends and fashions about as regularly as a teenager revamps its Instagram profile, but this one isn’t going anywhere. It’s the one about the South African winelands’ old vine project, conserving decades-old vineyards sunk into the country’s ancient soils, often in far-flung places up on the West Coast and the Citrusdal Mountains. The story is of the vines and their evocative regional identity complemented by the intriguing profiles of the wines made from them; wines bottled and crafted by red-blooded South Africans wanting to express the land, its old vineyards and the provenance of the country’s vinous legacy in a bottle. And to pour it for the world with a straight backbone, rigid with pride.

When talk of old vines began circulating through the industry and the media some fifteen years ago, few could have predicted that the philosophy and impassioned pleas to conserve these stumpy, gnarled grape-bearing plants of 35 years and older would grab the imagination of the South African and international wine world to the extent it has done. In 2002 Rosa Kruger, a former journalist and lawyer – and now farm manager and viticulturist – began looking for old vineyards around the Cape winelands while still vineyard manager at L’Ormarins, the Franschhoek wine farm belonging to Johann Rupert.

Timeworn patches of vines, many forgotten, were tracked down in the Swartland, outside Vredendal and in Citrusdal. Spirited place names such as Piekenierskloof, Skurfberg and Moutonshoek added to the allure. And once rock-star winemakers Eben Sadie, Adi Badenhorst and Chris Alheit showed, together with the inspiration from Rosa, an interest to vinify the fruit from these low-yielding far-flung vineyards, it all began falling together rather nicely.

So-much-so that in 2016 Rupert agreed to fund Rosa’s idea of harnessing the old vineyard culture, its producers and the wines under a unified organisation. Thus the Old Vine Project was born, and scarcely three years after its launch this has arguably become the most dynamic and positive force to hook onto the South African wine industry since the Swartland revolutionaries began shooting the lights out.

Some 3 505ha of vineyards registered 35 years and older are spread through the Western and Northern Cape, compared to the 2 952ha that met André Morgenthal when he was appointed to manage the Old Vine Project in June 2016. And his appointment to run the initiative began in the strongest literal sense.

Morgenthal, a seasoned, competent and colourful industry figure who had spent 16 years as communications manager for Wines of South Africa (Wosa), the industry’s international generic marketing arm, was pulled into the job by Kruger.

“I often saw Rosa, who I’ve obviously known for some time, at the Green Gate restaurant in Stellenbosch and I often spoke to her about her old vine passion, the regions she had to travel looking for the vineyards and the great wine coming from the producers,” he recalls. “Then one day, June 2016, she told me that an old vine association was going ahead – she had had a four-hour meeting with Johann Rupert who agreed to put-up the seed-funding for the project. Rosa then said the organisation was going to map and market; do research and lobby; seek sponsors, and so on, and so on. I asked her, that’s great, but who’s going to do all that?

“Rosa just looked at me and said, ‘you, André’.” He laughs. “I resigned from my old job the next day.”

Listening, reading and physically witnessing what the Old Vine Project has achieved in such a short period of time underscores the potential that has been lying under our industry’s very noses, the potential to give the world something great in wine – through South Africa. And it is being lapped up by media, retail, sommeliers and wine-buyers from around the world. Yes, for once South Africa is the leader: old vines might be common sights in France, Spain, Italy, Portugal and the America’s. But the Old Vine Project is a world first in corralling this unique vinous collateral and use it to market the country with something unique and special.

“We now have 70 registered producers of old vineyard wines on our books, and I kid you not, scarcely a meeting with winemakers, wineries or co-operatives who have access to old vines goes past without us receiving more applications for membership.”

And the list of members reads like an honours-roll of the industry: Sadie Family Wines and Chris and Andrea Mullineux, David and Nadia Sadie. Prime Stellenbosch properties such as Waterford, Ken Forrester and Longridge. Anthonij Rupert Wines in Franschhoek. Large co-ops such as Windmeul, Daschbosch and Orange River Cellars.

“There are just so many rewarding aspects about representing the Old Vineyard Project, from experiencing this heritage of walking through 70 year-old Chenin Blanc vineyards with the farmers, presenting the wines to a sell-out hall at the Prowein show in Düsseldorf, Germany and working with the rock star winemakers as well as the inspirational older guard, such as Kevin Arnold at Waterford and Ken Forrester,” says Morgenthal.

“But when you talk to the old, traditional co-operative wineries, telling them about the magical living antiquities growing on their farms and that these vineyards deserve so much more than being crushed into a ubiquitous big wine blend. And you see these traditional farmers, grape-growers, beginning to realise that there is a pride in the old vineyards that has been part of them and their forebears’ farming culture….well, that’s truly rewarding. That, plus the fact that despite all the nice warm feelings and emotional attachment to the land, old vines can add value for the grape-grower.” 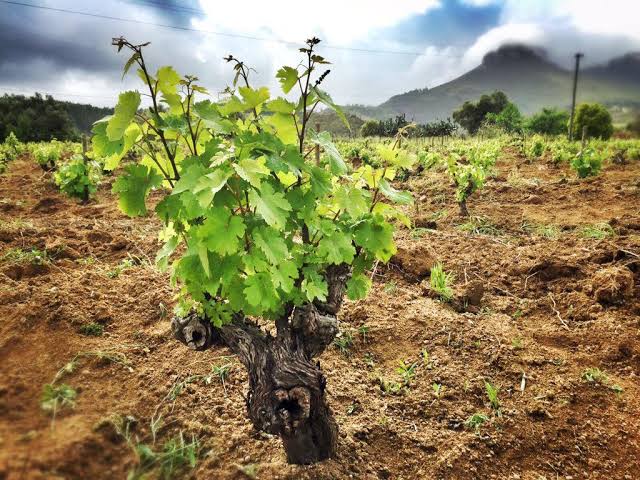 Pieter Cronjé, marketing director for uniWines, a 40 000 ton co-operative cellar in the Breedekloof, has like Morgenthal experienced this at first hand in dealing with his members.

“We are making old vine wines through our Daschbosch label after we identified old vineyards of Muscat d’Alexandrie (Hanepoot) and Clairette Blanche of over 120 years and 42 years old respectively,” he says. “Now that the wines have been released to such wide acclaim through the old vines ethos, I am finding farmer-members coming to the fore offering their old vineyards. Or alerting me to the fact that their Chenin Blanc or Cinsault block will be ready for old vine certification (35 years) in a year or two’s time, and that we must talk.

“This has really instilled a sense of pride – not only in the farmers who have owned these vineyards for generations, but for our winemakers who make the wine from this rare fruit and, I think for the South African wine industry itself. Old vines is a part of who we are as a wine country, and we can tangibly show our heritage, history and culture with the wines made from them.”

Despite the initial attention on old wines attracted by winemakers in the Swartland and other parts of the West Coast, Stellenbosch is the largest old vine area, with 901ha of senior vineyard spread. The most famous of these wines is the Mev. Kirsten Chenin Blanc, made by Eben Sadie from a one hectare vineyard that was planted between 1907 and 1920 in the Jonkershoek region. And commanding a price of R875 – if you are lucky to get your hands on a bottle.

“Obviously the value proposition old vine wines are capable of is a crucial element to the Old Vine Project,” stresses Morgenthal. “You can’t exactly ask a farmer to keep his old vines in the soil if he is being paid a pittance per ton and can replace them with higher-yielding young wines. There has to be an incentive for the growers, which means old vine wines deserve a premium price. We have, however, done consumer research showing that people are prepared to pay an average of R310 per bottle of vines bearing the Old Vine seal. Although obviously there are wines from certain producers for which consumers are willing to pay much more. Eben Sadie, Mullineux, Chris Alheit being just a few.”

Stellenbosch biodynamic farmer Johan Reyneke from Reyneke wines confirms this commercial light for old vineyard wines. “Demand for my two old vine Chenin Blancs has really gone ballistic through the association with the Old Vine Projects,” he says. “So-much-so that I’ve got to pull-out of some of the tastings André does for the association, because I just don’t have enough wine left.”

Reyneke, to my money the country’s leading wine farmer in the biodynamic-organic-driven-by-nature domain, says the reason for old vines success is simple. “Just taste the wines, man. Wines made from vines of 35 years and older, they are just next level on so many fronts. Drinking them is like having a conversation with Nelson Mandela.”

Nadia Hefer, Morgenthal’s assistant who specialises in consumer research, statistics and all things digital ensures that Morgenthal and I don’t miss this point or Reyneke’s: “When it comes to old vines, the Old Vine Project and where we are going with this, the overriding maxim is that of longevity through quality,” she says.

Morgenthal picks-up. “That’s right, at the end of it all, it is about the wine,” he says. “Rosa chose 35 years as the age at which a vineyard has reached an age capable of producing something extraordinary. Lower yields. Smaller berries. Higher acid, and lower pH-levels. When a vineyard is young it shows the grape variety, all those boxes of characteristic flavours you can tick off in a Chenin Blanc or a Pinotage. But the older the vine gets, the less it shows its variety and the more it shows a taste of place. The wine is leaner, longer and with the vines having had all those years’ experience in the soil and under the climate, the wine is more interesting and definitely all the wiser.”

Interesting enough to stay and wise enough to lead the South African wine industry to a next level. Because, even if it is old, there’s always something new from Africa.

One thought on “For South African Vineyards, it’s in with the Old”