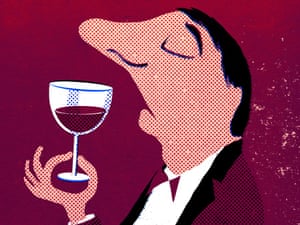 One of the heavier burdens those in the wine industry have to bear, is the misperception that said individual has an encyclopaedic knowledge of all aspects vinous. It is simply assumed that those writing about or working in wine have a vastly superior frame of reference on the subject than the mere mortal who simply enjoys sipping the odd glass, instagramming irreverent wine labels or taking a selfie with some startled wine-maker found perusing the dog-food aisle at Spar.

However. Beginners who tend to bow to the supposed superior knowledge of wine writers, marketers and influencers can find comfort in the fact that wine is, simply put, one of the easiest topics to bull-shit about. Herewith, thus, a beginners’ guide to useful techniques on how to come across as an anally precise, pedantic and know-it-all wine bore. (Come on – we know you have been aspiring to this all the time.)

Whether in spoken or written form, the conveying of wine terminology plays a prominent role in coming across as a wine fundi. There is a vast landfill of descriptors, adjectives and terms for one to get your lips or pen around, and by deploying two or three of these at one time your status among wine pundits will rise faster than an Elon Musk rocket after a drop in the oil price.

Granted, showy descriptive terms such as “black-berry”, “bruised apple” and “oyster-shell salinity” are indeed handy. But those wishing to really make a mark on the conversation should up their game a notch or two with suitably expansive ways of underscoring one’s perceptions. A fleshy, sweeter wine becomes “fruit-driven”. Be the wine dry and fresh, it is these days non-negotiable to state that the zippiness of the drink exudes a “pronounced minerality” – not only to capture the essence of the taste with your cultivated palate, but also to leave the impression that you can through taste and taste alone tell that the vineyards from which said wine is made are grown on soils awash with rocks, boulders, pebbles and slivers of ancient geological particles. 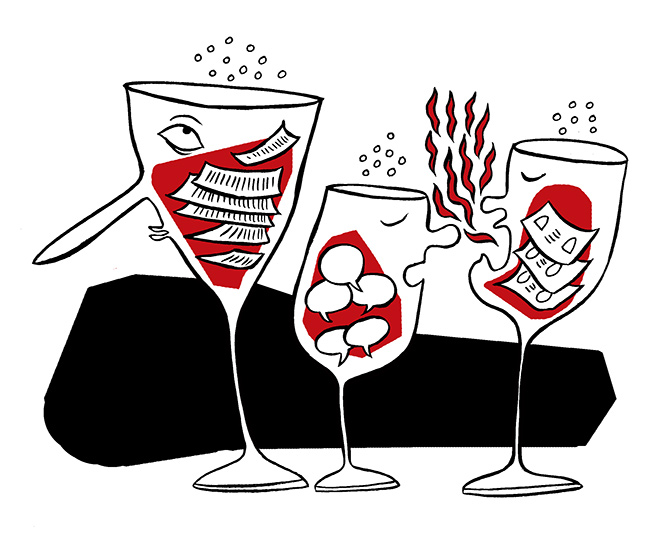 But if you really want to take your audience’s breath away and have them partaking in the OHGT (one-handed googling technique), go next level with a couple of technical terms. “Primary and secondary characters” are hugely impressive, as are “malolactic fermentation” and “extended lees contact”. Just don’t overdo it by dropping your verbose vinous load all at once. Used sparingly and at the correct moment, such as the silence following the joyous, drunken laugh of an influencer spotting a tray of refreshed canapés, your words of wine wisdom will have maximum effect, leading to an instantaneous increase in your status.

By peppering your communication with the names of those godly figures making wines and tending vineyards you show a keen, admirable knowledge of the subject. When in the company of a few mortals tasting some Porseleinberg Syrah, for example, judiciously remark that “Callie Louw is a really charming fellow who complements his winemaking with some pretty admirable poultry farming, and he has a few big cocks around”. You might not know your Syrah from your Sémillon, but such informed opinion has you taking over the show. Sharpish.

For extra clout, use the name of the winemaker coupled to some insight on the topic itself. Like thus: “One can’t help but notice that since Emul Ross began running the cellar at Hamilton Russell, the Pinot Noirs have shown a stylistic and structural digression from those wines made by Hannes Storm.” I mean, really? Is anyone not going to be impressed?

Dropping the winemaker’s surname has your perceived knowledge reaching gasp-inducing levels as here your insight is complemented with a possible acquaintance of the hero in question: “Say, I notice old Thys from Diemersdal is crafting Sauvignon Blanc from frozen must so as to impart a vivid tropical character to the wine.”

The floor is yours.

Statistics are essential in creating an impression of wisdom. A brief perusing of the Platter’s Wine Guide, Tim Atkin’s Report on South African wine and the Wine Spectator and Decanter websites will leave you with hard-hitting snaps of information to bandy about. “I happened to notice that Bruwer garnered a charming 96 point-rating for his Raats Cabernet Franc 2015.” Now, you might actually think this variety is a Cabernet named after Frank Sinatra, but the assumed pearl of wisdom you just left will lead to men speaking about you in hushed tones and women sweating uneasily on the upper-lip.

Knowing something about wine is one thing, but to be able to recall various years of vintage is quite another tot of Claret altogether. This places you in the domain of wine disciples who are – in the views of others – able to walk on water, feed 150 wine writers with two Dias Tavern trinchados and be followed by Jancis Robinson on twitter.

When asked to voice an opinion, drop the adjectives and informed opinion, and simply state the wine in question is definitely worth contemplating as it “was made in the best vintage since 2009”. For added impetus, ensure your stating of the vintage is followed with brief historical insights into the years concerned. 1974 was, for example, characterised by a long, wet winter with assured brightness in the early spring days. The easterly wind howled during 2003’s stage of veraison, and the 2015 vintage saw even, balanced bud-break and perfect pH levels as a result of unseasonably misty mornings in late October.

Just go for it. Memorise a few vintage characteristics or even just make them up. Your professorship in Wine Excellence will be in the mail.

Spoken and written communication should be partnered with the correct body language if you wish to be seen as a boffin instead of just another illiterate in the world of wine. Nothing a bit of practice cannot sort out, however, a few preparations having you looking like a hungry, cocksure contestant in the Montenegro World Wine-tasting Championships.

Always lift the glass by its stem. The first action of the wine expert is to tilt the glass towards the table, raised eye-brow optional. This shows that you are not simply happy to sniff and taste the wine, but your higher calling as a wine master demands a scrutinising of the elixir’s colour. Do not hold back when smelling the glass’s contents, as a quiet, subtle sniff could go unnoticed, leaving the impression that olfactory analysis is of little importance. Just go big with long, voluminous snorts followed with slightly audible sighs, the latter making an emotionally charged dramatic impact.

When the wine is in the mouth, suck in both cheeks – an action known as the Pinot Pout – which, despite making your pursed lips resemble the butt-hole of a startled pig, looks like the well-versed actions of a true wine samurai at work. Now, nod your head or shrug your shoulders, as if the wine is imparting some secret revelation to you and you alone, and only then jot down a few notes. Sit back, make as if you are in deep philosophical thought where battle is being done with conflicting inner-convictions.

Look up when you hear that sound. What sound? The sound of applause.

Because you’re worth it.