One of the many colourful stories about Paul Sauer, the first owner of the famour Kanonkop Wine Estate, concerns a train ride. During the 1950’s South Africa had a railway system to be proud of. Sturdy, gleaming steam locomotives transported passengers and goods through the length and breadth of the country. Efficiently and punctually. And as Minister of Railways at that time, Paul Sauer preferred to travel by train whenever possible, loving nothing more than to have his fellow politicians and other high-browed friends on-board to witness the fine state of the trains, tracks and stations he was overseeing. In between bouts of wine-farming at Kanonkop in Stellenbosch, that is.

It was on one such trip between Johannesburg and Cape Town that Minister Sauer entertained a fellow cabinet minister, a few deputies and one or two MP’s in the train’s splendid dining carriage. A four-course lunch was served on china. The Sheffield silverware gleamed and the linen was crisp and white. Diners sat in comfortable leather seats while white-jacketed stewards provided brisk and efficient service.

During this specific trip one Giepie, a slight, somewhat nervous middle-aged steward, was responsible for looking after Minister Sauer’s august table, which he did brilliantly. The soup and fish and lamb were delivered promptly, and wine was poured into crystal glasses that now-and-then made clinking sounds as the train rattled through the Karoo.

This table was rowdy and convivial – Minister Sauer liked to hold court, glass of Tassenberg in one hand and pipe filled with smouldering Magaliesburg tobacco in the other.

As Giepie cleared the empty dessert plates, Minister Sauer asked that a bottle of brandy be brought to the table along with the coffee. And listen to this, he told his fellow diners, a bucket of ice. Of all the things one can find on a passenger train from the South African railways, ice is one of them. A relative rarity in those days, that was.

The men’s talk continued, debates and arguments interspersed with jokes, stories and opinions on rugby players and film stars. Not to mention politicians of the Opposition.

Getting well-oiled now, the Minister and his fellows were not planning to vacate the dining-car, and by 4pm they were already on the third bottle of brandy and fourth bowl of ice. Each time Giepie was asked to do so, he would clear the ashtrays, refill the ice-bucket and get a new bottle of brandy. 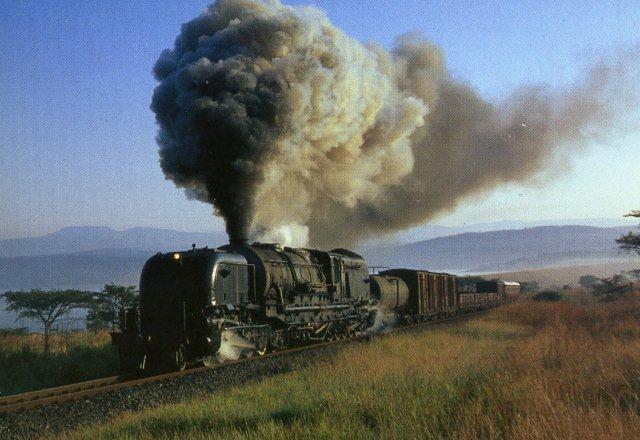 The sun was beginning to set over the Karoo, and Minister Sauer was feeling nostalgic as his beloved Boland mountains were soon to be in sight. He was also smiling at the fact that his fellow politicians were – after the afternoon of imbibing – looking and sounding a bit worse for wear, now unable to keep up with Sauer’s opinionated rantings on world history, politics, literature and the future of the Union of South Africa.

But even he knew that the party was going to have to come to a close – it was a few hours to Cape Town, and work lay on the other side.

Sauer summoned Giepie once more, ordering a bottle of brandy and a refilled ice-bucket. The waiter obliged, smartly as usual. Upon returning to the table, however, Giepie only had the bottle of brandy.

The Minister looked at him questioningly for the first time of the trip.
“Minister,” said Giepie. “I’ve got the brandy. But there’s no more ice, Minister.” An embarrassed silence fell at the table. Service fail on the great South African Railways, Minister Sauer?

Giepie shrug his shoulders. “It’s just, the chief steward says if I remove one more blocks of ice from that corpse laying in the cold storage wagon, well then the body is not going to make it fresh to Cape Town, Minister.”

One thing the SA Railways did not have – besides the ice – was a knife sharp enough with which to cut the air. True story.