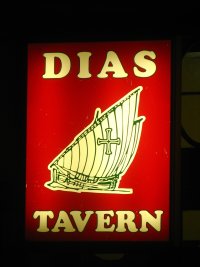 Besides both having their respective important uses, Dias Tavern is like a prostate gland: you have to check-up on it regularly. Dias sees me about twice a week, and after a recent clock-in, the decision was made to place this eatery under a bit of media scrutiny.

The occasion was a belated birthday celebration for Joaquim Sá, South Africa’s representative for Amorim Cork and an indelible wine industry personality in his own right. Another reason for inviting Joaquim was his current avoidance of alcohol drinks, ensuring that – seeing as I was paying – the bill would not outweigh current income levels. For a thirsty Portuguese can outdrink a camel when he is in the mood, except camels don’t drink Vinho Verde at R175 a pop.

Dias was, as usual, vibey and busy on a Thursday afternoon and waitress Anna seated us at those booths before the brilliant artwork showing three Portuguese sailing vessels in Table Bay, a dramatic rare maritime artwork shared by a graphic of a bottle of Three Ships Whisky. Being known as a creature of habit, I was not offered the choice of something to drink and before I could say “vamos vinho” a cool pint of Castle Draft, the best South African beer ever, was placed before me.

Joaquim eyed the beer with a pained look, but did well in pretending that the litre bottle of still mineral water was giving him so much pleasure that a happy-ending was already in sight, even before the chouriço had arrived.

For starters we selected the fried squid tentacles and sliced accompanied by a fresh, crisp Portuguese roll right out of the oven.

The tentacles were cut into single legs, covered in a seasoned batter and deep-fried the hell out of until melt-in-your-mouth tender. Squid is about texture more than taste, and as long as it has not got a whiff of sea-staleness and dead seal about it, most of the dishes made from this creature makes for superb eating.

Dias squid’s edge comes into the more-ish seasoning, which probably has enough MSG in it to power Helen Zille’s blow-drier, but who cares. The tentacles were both soft and crisp, with a lovely savoury marine taste to assist the beer in going down a charm.

Served sliced and in a perky red oily sauce not shy on the chilli, the chouriço was equally satisfying. But it was quite strong in flavour, the robustness of the peri-peri causing Joaquim to wipe his brow, something I only see him do when Benfica FC miss a penalty kick, which is quite often these days. 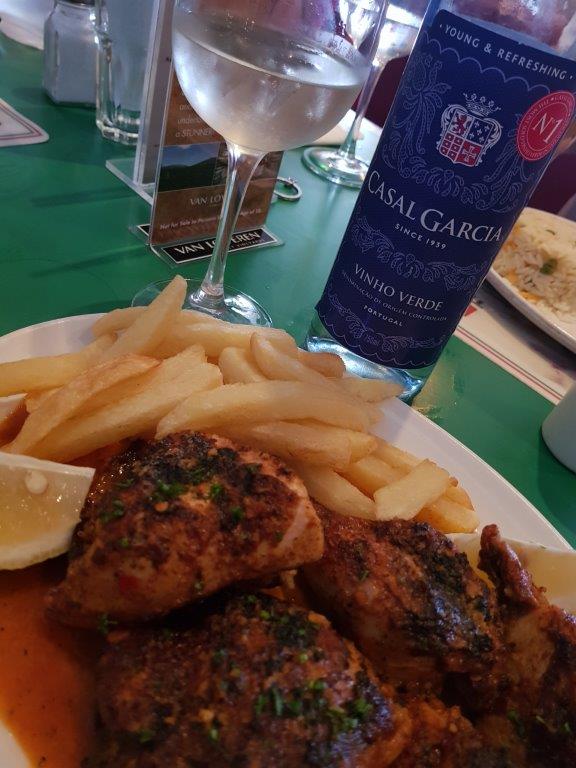 Onto mains and one has to decide on the beefy numbers – trinchado, espetada Portuguese steak – seafood or chicken.

There was fresh baby kinglip on the menu, and Joaquim ordered this without hesitation. Rice instead of chips, please. The spice of the chouriço had gotten me into that sort of mood, and before I knew it a chicken peri-peri was on its way, double-fried chips please. By now the bottle of iced Casal Garcia Vinho Verde had been placed before us, Joaquim holding a remarkable poker-face while I got pouring.

The fish arrived, and it was a thing of beauty. A whole fileted little kingklip, perfectly grilled and resplendent in a golden-brown coat which gave-way to pearl-white flaky flesh as Joaquim’s fork entered. He was now quiet, removed to that world of seafood-eating pleasure that has a trance-like effect on anybody bearing a smidgen of Portuguese DNA.

My chicken was itself a thing of beauty. Marinated in peri-peri for hours if not days, it had been deftly grilled to a dark covering with promises of heady heat, searing spice and exotic culinary pleasure.

Which it was. The flesh, perfectly tender and moist, fell from the chicken bones like clients from a KPMG portfolio and its serenely satisfying flavour was complemented by the salty, tangy, fiery after-burn of the perfect peri-peri sauce.

Washed down with glugs of crisp Vinho Verde, this Dias chicken was, at that time and at that place, the best food in the world.

Chips were real chips, none of those horrid pre-cut, pre-frozen abominations the lower dregs catering business inflict on the culinary world. These were crisp on the outside, with the tender, hot interior tasting of pure potato and starchy heaven.

Only I had dessert: an espresso fierce and black, sweetened delightfully when accompanied by tawny port.