Pinot Noir deserves the reverence it commands, for at its best it is an indescribably beautiful wine. More has been worded about this variety’s elegance, charm, grace and seductive character than there has been about the Kennedy Assassination Conspiracy and the Spanish Inquisition – combined.

At times, though, it does seem  a pity that a few heads sharing a bottle of Burgundy or other fine Pinot Noir appear to be more in a state of worship and transcendental grace than one associated with actual wine enjoyment. As if the mere presence of Pinot Noir commands a shift in pose from glass-raising cheerful wine-lover to bleary-eyed disciple on the verge of levitation, guttural chanting and rapture-induced collective mass suicide.
Pinot Noir is fun to drink in a makes-life-better sort of way. Cistercian monks who made the stuff in Burgundy eight centuries ago saw their dull, frugal lives cheered solely by bright, berry-flavoured wine consumed with meagre meals in cold, dank monasteries. In Beaune I have experienced nights of raucous drinking, Pinot Noir flowing in the Bar du Monde and downed by the bottle by joyous winemakers, the chalk soils still stuck to their hands after a long day in the vineyards.

.
Of course, the fact that Pinot Noir don’t come cheap is a slight hindrance to those of us who would glug it noon to night. But like the late Ronnie Melck, Stellenbosch Farmers Winery CEO and owner of Muratie Wine Estate, I believe Pinot Noir to be the best “kuier” wine, i.e. a wine to enjoy in healthy amounts while socialising, dining, gambling, arm-wrestling or preparing for a knife-fight with a just-released gangster name Piepie.
Elgin does a pretty decent job at making Pinot Noirs at the top-level, but also has a couple of really enjoyable and affordable wines which I would call “quaffing” if the word did not remind me so much of a big-haired brunette indulging in a spot of back-seat fellating.
Paul Cluver Wines’ Village Pinot Noir and Iona’s Mr P both come in at just over R100 and show that the heartbreak grape can be fun, flirty, easy-drinking and downright delicious.
With a label resembling a Bree Street neck tattoo, Mr P is hard to miss on the shelf and the wine is equally vivacious and loud. At this price, new oak is obviously not in the mix, and the older barrels allow the wine to breathe, run freely and garner a no-holds barred, light-hearted appeal.

The nose gives loads of squished black-berries with a yum-licious Ribena edge. It hits the mouth like a strawberry ice-lolly on a steamy summer day. All refreshment, dense crab-apple, mulberry and prune flavours are held by surprisingly firm tannins and a riveting acidity. The tuft of freshly ground pimento and hit of porcini powder ensures the Mr P stays true to its Pinot Noir pedigree, but like a Hugo Boss jacket worn with scuffed Blundstone boots, it’s more hip than the square associated with top-end Pinots.
Village refers to the second-level echelon of wines as graded in Burgundy, and Paul Cluver uses it as the first rung on the climb to its Pinot Noir offering which leads to the Estate and ends with the iconic Seven Flags. 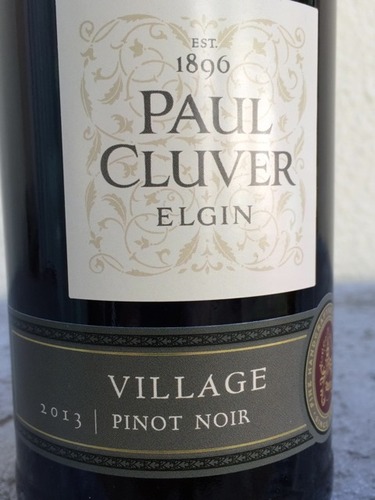 Priced at around R105, this wine shows the Pinot Noir bloodline Paul Cluver has become known for, while tweaks have been made to give the wine a flirtatious fruit-forward approach. Older barrels allow the juice to open up, the nose being full of opulent old school aromas including leather, potpourri and dried Turkish plum skins. But what a gorgeous texture on the palate. The palate attack is about as aggressive as an Italian naval strike, and on the mouth the wine lies alluring, perky and smooth as the flavour medley plays at full tilt.
There is a teasing spiciness mingling with soya sauce, crushed pomegranate and cut strawberry. I find the slight confection in the mid-palate sunny and pleasurable, while the finish rewards with a grip fresh and confident enough to raise one’s neck-hairs before pouring the next glass.
These are truly great Pinots for potential converts to the Great Red Grape and the path to enlightenment as well as accessible, variety-true wines for those who want the grape without the symphony and the show without the drama.
And you’ll always find more.