Before fleeing certain death at the hands of the rampant Catholic hordes, my forefather knelt before the grave of his old man in the cemetery in La Motte D’Aigues. There Pierre Joubert promised that «Notre sang Joubert continuera à travers les vigne de l’Afrique » (Our Joubert blood shall continue through the vines of Africa.)

This was in 1687, some 10 months before Pierre and his fellow French Huguenots arrived at the Cape and began alleviating the mess the Dutch settlers had made in their dim attempts to create a South African wine industry. And looking down on the Cape winelands from the great Domaine in the sky, Pierre and his fellow Huguenots can feel proud of the way their descendants got down to create a formidable wine industry, one resplendent with premier product, colourful history and awash with fluid, atmospheric culture.

Currently, as I see it, the Joubert influence on brand South Africa is led by Schalk-Willem from Rupert&Rothschild Vignerons at Fredericksburg in Simondium. To be a cellarmaster and managing director at a winery owned by the South African Rupert and French Rothschild families must surely not be the easiest gig in town. Standards are extraordinarily high. Opinion and ego from both sides of the partnership have to be dealt with the kind of diplomacy that would make Pope Francis look like Donald Trump.

And with names like Rupert and Rothschild around, one can be sure that when it comes to business objectives, the owners are not going to fall for the “takes a big fortune to make a small one” cliché.

But since its first harvest in 1998, the partnership has been an exemplary success story in the local wine industry. The portfolio consists of only three wines – Nadine Chardonnay and two Bordeaux blends named Classique and Baron Edmond – but enviable, eye-watering volumes sold under an engaging brand representing universal excellence ensures the cash-register keeps ticking over very nicely, as required by the names R&R.

Various occasions of late have given me the opportunity of opening the Rupert&Rothschild Classique and the Nadine Chardonnay, and there is no reason that this brand does not deserve a spot at the top-end of the list of great South African wineries. But with popularity and commercial energy not being conducive to making Top 10, 20 or 100 lists, this ain’t going to happen.

The Nadine Chardonnay 2014 has a characteristic whack of floral, honeycomb Elgin fruit, superbly vinified to a clean, pure style incorporating 11 months aging in 300l barrels, one third new. Bright and oceanic on the nose, the wine hits the palate with rays of sunlight, a splash of grapefruit and some understated stony character. I find that Elgin soils do not present Chardonnay with those grilled nut and buttery characters, rather walking a fine line between a summery floral breeze and a complex, textured harmony of citrus, pear-drops and the first run of squashed winter melon sap. 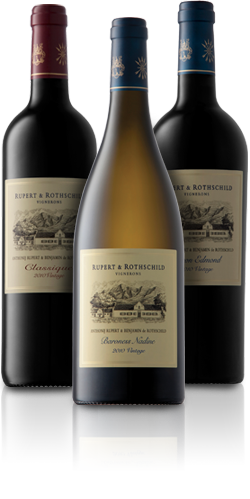 In the mouth the wine lies easy and snug, swinging rhythmically on a hammock of soft lily petals and cool Egyptian cotton slept in by a freshly bathed female volleyball player.

On the red side, the Rupert&Rothschild Classique is known to be one of the best-selling South African Bordeaux red wines, and this includes a cult following in the Far East. To make a wine of this quality in volumes that can be described as enthusiastic, takes a huge amount of skill for which Schalk-Willem and his team in the cellars and vineyards must take a lot of credit.

The Classique 2013 is dominated by Merlot and Cabernet Sauvignon, with a bit of Cabernet Franc and Petit Verdot thrown in. I have tasted with Schalk-Willem and have noted that in an understated and unassuming way, he comes across as being extremely fastidious and tremendously knowledgeable about blending components. In this regard I put him in the same league as classic winemakers of the ilk of Danie de Wet, Neil Ellis, Jan Boland Coetzee, Kevin Arnold, Beyers Truter and Johan Malan.

And the Classique is a great wine. Only some 18% sees new wood, so there is a lot of cherry, currant and crab apple going on when the wine is young. Yet, the acid-to-sugar ratio is magically precise, giving the wine an Old School savouriness and wilted mushroom character, while at same time being driven by fruit purity. It is a work of true craftsmanship, nothing out of place, rewarding and enjoyable as well as commanding appreciation for something that is really very beautiful.

Let it flow, Schalk, let that blood of our ancestors flow.