Last week’s Amorim Cork Alvarinho wine-tasting at Muratie gripped me with soil-encrusted hands, held me against a blue overall smelling of olive oil, garlic and sardines, and threw me over to the Atlantic Coast of north Portugal. Few things can export you to those other places, foreign and exotic and special, the way a wine does. And for this, the white grape of the Vinho Verde region, Alvarinho, does it in a way no others can.

As I uncorked the line-up and proofed the bottles, I could hear waves crashing on the barnacle-encrusted rocks of Espinho, hear the slapping sounds of Mammas beating crap out of fresh octopus against the wooden sides of fishing boats.

The taste of those bracing, edgy white wines made me long for a plate of grilled sardines or the sweet creamy flesh of a huge orange crab with claws the size of a baby’s forearms. 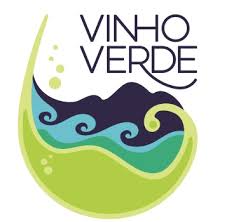 Until the turn of the millennium Alvarinho was, along with cultivars like Avessa, Loureiro and Arinto, one of the grapes blended and used to make the sharp, fresh Vinho Verde wine. But certain producers, pushing the edge and seeking purity and individual expression, turned to wines made from Alvarinho outright. Still bearing the Vinho Verde seal, these wines originate – by law – from the regions of Monção and Melgaço, right up on the border with Spain.

And while more serious and linear than the motley crew of chirpy Vinho Verdes on the market, the single Alvarinhos are not uptight about themselves. They are light-hearted and fun to drink, but with lovely purity and enormous sense of place.

Most of the wines tasted were fermented at low temperatures, between 14°C and 18°C, and predominantly in stainless steel. Lees contact is the kicker, they say, the aim obviously being to catch as much natural grapeness in the wine as possible. 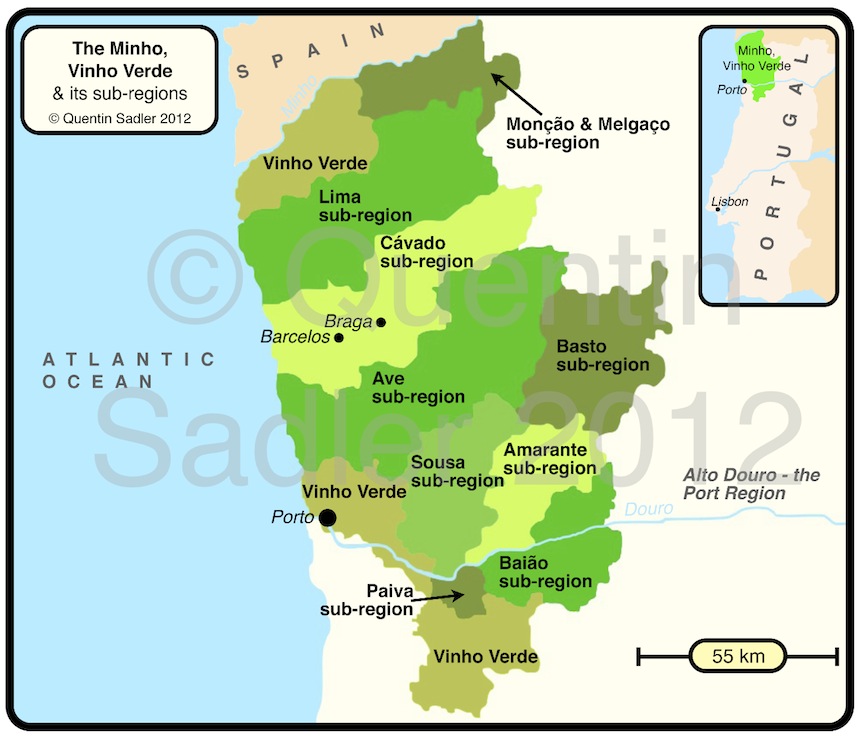 Well-known Alvarinho-producer Anselma Mendes goes a step further with his wine called “Contacto”, giving the juice some skin-time before fermenting. A risky business seeing Alvarinho’s thick skin and the abundance of pips which could cause licks of bitter, this method works fine for me if controlled correctly. The resultant wine is stony and floral, with a tangy whack of salt and a finish longer than a Ronaldo free-kick downwind.

Two wines from the Soalheiro house were presented, namely the Quinta de Soalheiro Reserva Alvarinho 2014 and the Soalheiro Primeiras Vinhas 2014 Alvarinho. No noticeable variance in vinification, only different parcels of fruit from varying terroir.

The soils of the Vinho Verde region are pretty much all sand and granite, but factors such as slope and proximity to the ocean and the river Miño separating Portugal from Spain play a role. And unlike the old days when grapes were grown with yield rather than quality in mind, crops for Alvarinho-only wines carry a respectable six to eight tons per hectare. 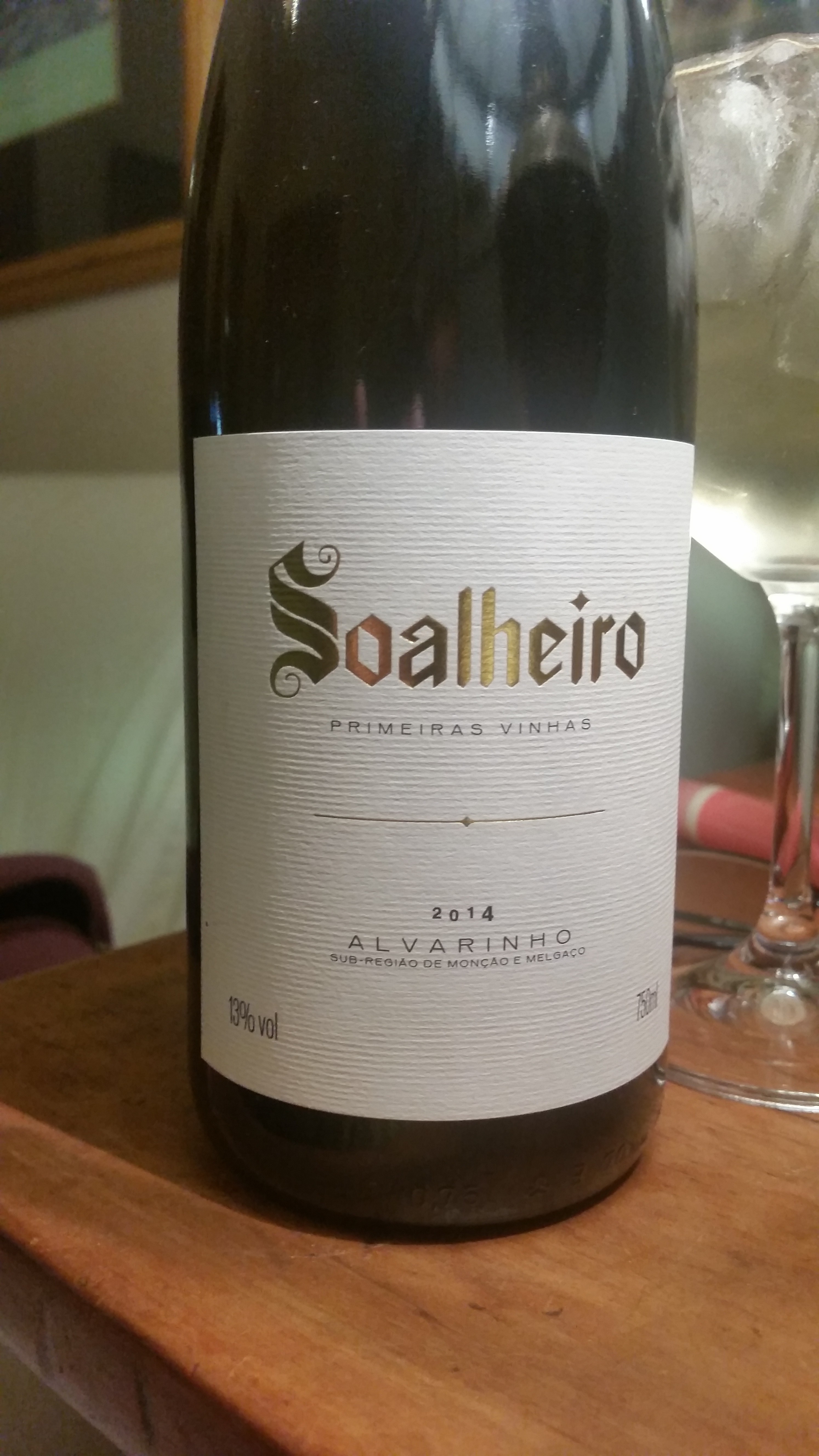 The Soalheiro wines are a bit denser, with concentrated palates showing white flowers, pear and ripped lime-leaf. The Reserva was the stand-out, a meticulously crafted white wine of painfully accurate purity and a finish wherein the balance between acid and fruit struck me like a tuning fork to the throat.

Hemel en Aarde Valley institution, Newton Johnson Vineyards, released South Africa’s first Alvarinho from the 2014 vintage, and it was happily welcomed into the line-up. Well, varietal characteristics abound and on the aromatic side it was brighter than some of the Portuguese versions. Where the Soalheiro Reserva had condensed flavours, I really liked the Newton Johnson’s surge of storminess on the texture side where it is loud and windy with freshness.

What is a themed-tasting without a curve-ball or two? And here we had procured one of the rarest wines in the world: An Arinto Acores varietal wine of which Antonio Macanita only makes 300 cases by 12 a year on the volcanic island of Pico, part of the Azores range some 1 300km west of Lisbon. 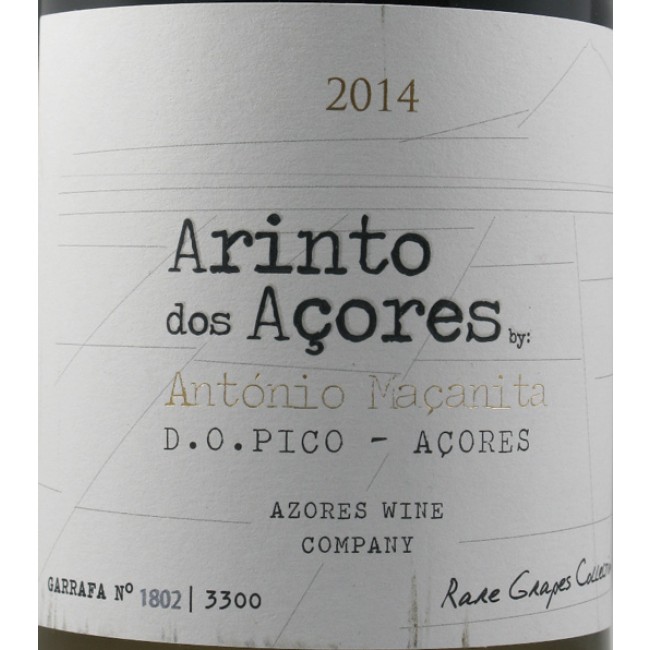 While the rest of the Azores are tropical and bounty-rich, Pico is covered with a dark volcanic soil on which not much grows. Macanita’s Arinto vines begin 50m from the ocean and produce a white wine of true greatness.

Perfume of orchids in a greenhouse are met by notes of washed seaweed and crushed mermaid scales. The palate is flows with dandelion and lemon sherbet, leading to the welcoming openness of a sliced green plum. Cool and assured, it is all rarified grape left to ferment, settle and bottle with no fuss and no real aim, except to make memories that last a lifetime.

One thought on “Wine Embeds Itself in Your Skull”