Nowhere is the pursuit of style and fashion instead of genuine culinary quality more noticeable than the current gushing hype around all edible things Peruvian. If you have not pensively pecked on a caigua salad with capsicum and lime infused quinoa or tasted a scallop pickled in pisco and tomato juice, you are doomed to status as a foodie ignoramus. The world’s apparent great and misunderstood cuisine – aka Peruvian – has inexplicably passed you by, leaving one in the wake of the missed HMS NextBigThing. The hype is huge, huge and huge.

What Peru is supposed to have going for it, I really do not know. It is a tiny South American country, hideously overpopulated by more than 30 million persons of mixed Spanish and Indian breed, with a bunch of Chinese, Japanese and Nazi war criminals thrown in. Peru celebrates a culture called Incan, represented by a people especially known for sacrificing young children to the gods by smashing their skulls with blunt objects or cutting their tiny beating hearts out.

The place where some heavy child murdering went down is the most famous thing to see in Peru. Machu Picchu is a set of ruins in the Andes where 500 000 tourists trek to each year to experience some sort of spiritual awakening, pose in the nude for selfies or catch a quick bonk against the Well of Remembrance to become member of the Manu Picchu Mile High Club.

No mention in Peruvian culture is made of Paddington Bear, the lovable character from the imagination of author Michael Bond. This cute duffle-coated fur-ball lands at Paddington Station in London after being mailed from Lima, Peru’s smoggy polluted capital and sets off on a series of adventures that will warm the coldest child-murdering Incan heart and will forever be my link to Peru.

But, I am told, Peruvian cuisine is tres trendy and Cape Town has a best place called Charango in Bree Street, which in the interests of thorough research and the need to join the conversation I had to try out.

That the place is hip and happening was accentuated by Charango being pumping and packed to the rafters at 19:30 on a week night. We sat outside, fortunately, as interior noise levels were brain-rattling loud. What I could make out visually, was a pretty chic design of service area and bar with some modern Latin paintings and a nicely patterned floor. The place, I was told, was that night full with a delegation of visiting Peruvians whose gesticulating and copious drinking meant that they were probably not in the mood for infanticide and child skull-cracking, erasing the chances of some late-night entertainment.

Our waiter made a precise introduction to a menu which was concise and interesting-looking, and I ordered a Tierhoek Chenin Blanc 2015 instead of the Pisco cocktails he was trying to fob off on us.

For start we went diverse: pulled pork tacos, asparagus and broccoli, the much-revered ceviche and the vaunted seared tuna tataki.

The most satisfying were the vegetarian option – crunchy broccoli and asparagus spears wonderfully fresh and tangy-seasoned – and the tacos. These were mouth-sized bits of light, floury tacos encasing hot nests of tasty pork. Thirty of these and three cold beers would have been enormously pleasurable.

Tuna tataki was, well, just wafer-thin slices of fresh tuna, something not even the grill-cleaner at KFC can stuff up, so I could not quite see where the magical Peruvian flair came into the picture. Same for the ceviche. Cubes of yellowtail perked by lime. What’s the big deal?

Onto the main event, and the Churrasco Sirloin had my name on it. Others went for pork belly and loin of lamb, bloodlust setting in as the diners from Peru began to whisper to each other in sombre tones.

My steak appeared sliced in an orange-coloured sauce with some dainty pearl onions lying around. It was all a bit naff, unfortunately. The steak lacked an aggressive char and the meat was not hung, and despite talk of chimichurri being in the picture, it was all pretty bland.

The BBQ pork belly was truly fabulous, a perfect layer of artery-clogging crackling nestling on a piece of fatty, soft, unctuous pig that must have been slow-cooked since the days when the conquistadors bought order to heathen Peru. The spices were earthy, yet flamboyant and the touch of pineapple brought a breath of colour and paradise.

I ventured one dessert, and only because it was made from sweet potato. I just had to see whether the Peruvian interpretation of this fantastic vegetable could match that of the Afrikaner cooks who had made this their own. 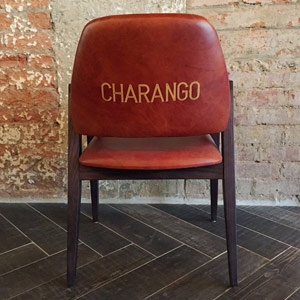 Picarones were like flat donuts baked from the sweet potato and came with a bowl of dulce de leche, the ubiquitous caramel sauce that seems to fuel the whole of Latin America. The whole thing worked: hot, nourishing and godly sweet it was all unreasoned pleasure, this being the point of dessert after-all.

A good meal, in parts, but this food is obviously wanting to be appreciated as being more honest and less hysterically worshipped than is currently the case. But when the others move on to the next big thing, I will be back.