Damn, he beat us to it. But then again, this is Deon Meyer, best-selling South African crime-writer whose latest page-turner is not only set in the Cape winelands, but the plot involves some real vinous skulduggery which will entertain both wine buffs as well as those with a cursory interest in the product and its cultural roots.

Ikarus, just published by Human&Rousseau, finds Meyer’s police detective Bennie Griessel out on a bender. Not wine, but Jack Daniel’s which pulled Griessel from the wagon and back into his self-destructive boozing ways. Police stress in South Africa might be as good a reason as any.

Then a body is found in the Bloubergstrand region. Body of one Ernst Richter, smoothie from Stellenbosch involved in the IT industry. Turns out, Richter was running a website where adulterers could buy alibis with which to cover their tracks from suspicious spouses, making his murder not that surprising. But it is a murder nonetheless, and Griessel and his guys have to get onto it.

As this is going down, a young wine farmer turns up at an attorney’s chambers to make a statement. Which is headed towards the possible solving of Richter’s murder. 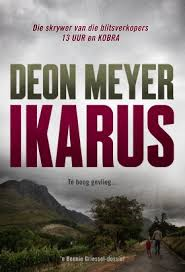 Francois du Toit is from the wine farm Klein Zegen on the Blaauwklippen Road outside Stellenbosch. And Klein Zegen has a bit of a shady past. Grandfather Jean, a philandering former rugby-star and old-school Afrikaner farmer, resented Francois’s father, Guillaume, for having ambitions of turning Klein Zegen into a wine estate which would reveal Jean’s uselessness as a wine estate owner.

But Guillaume travels to Bordeaux where he learns about terroir and sense of place, studies wine-making at Stellenbosch and takes a cue from the likes of Frans Malan, Danie de Wet and Tim Hamilton Russell in turning Klein Zegen into an estate producing own labels instead of being a supplier of grapes to the KWV.

As the plot flies along, Griessel and his team’s pursuit of the murderer responsible for Richter’s death is interspersed with the trials and tribulations wine farmer Guillaume du Toit had to endure, both in terms of challenging the status quo of the traditional South African wine industry as well as some murky past and present family stuff.

As if farming and the wine authorities do not present enough of a challenge, try having your son – Francois’s brother – certified as a psycho.

Francois’s owns story, told to the advocate, ends with the shady and murdered IT-pirate Richter approaching the ambitious wine farmer with a deal to make mucho dolleros. Think Château Lafite and forgery, as well as the involvement of some folk who were overseeing the KWV’s own faking operations of French champagne in the early 1990s.

As usual, Meyer’s writing is brisk, gripping and convincing. His depiction of the inner-workings of the wine industry will no doubt be scrutinised by anoraks who are ever precious when an outsider ventures onto their turf, but like his hero Griessel, Meyer will always have the upper-hand.

Ikarus is currently only available in Afrikaans, but once it hits the international market in English where Meyer sells novels in bulk quantities, we should not overlook the potential it has of creating some further fascination with the South African wine industry among foreign audiences.

Buy that man a drink.