We were talking about a herd of lion devouring a still-living eland when Boela Gerber walked in with a bottle. I tried to follow the rest of wild-life photographer Hannes Lochner’s story, which was getting interesting: the black mane Kalahari lions were now plucking the eland’s wriggling fetus from her cavity. But the Cape Winemakers Guild wine Boela was carrying was more exciting, more visceral, more thrilling.

Because I had been hearing about the Neil Ellis CWG Pinotage for some time. But as of yet, the elixir was as elusive as the female leopard called Luna which Hannes had followed around the desert for two years whilst photographing his internationally acclaimed book, the Dark Side of the Kalahari.

The bottle was going to be opened during lunch, but there are some wines that require a more refined space to contemplate than the Dias Tavern. So I challenged the other two to a quick game of poker, winner keeps the Neil Ellis. I won – without even slipping – an ace and the wine was mine, but I did end-up paying for the vinho verde.

Later, alone in a quiet well-lit room, I opened the Neil Ellis CWG Pinotage from the 2011 vintage. I decanted, the splashing of red wine causing a heady aroma to fill the room, an aroma that got my groin glowing and the Dachshunds reaching for their Luftwaffe oxygen kits. It smelled of danger and of poetry, it smelled of wine and those little deaths that follow a good life. I saw the space, the mountains, the ripples of the stream in Jonkershoek where the Pinotage grapes for this wine are grown.

First up, may I say that the Cape Winemakers Guild offers the finest collection of South African wines under one label. All this nonsensical talk of over-alcoholic and excessive extraction and heavy ripeness bandied annually by a sect of self-imposed circle-jerkers has – fortunately – had no effect on the CWG’s success which seems to know no bounds. From top to bottom, the CWG is an organisation following principals of excellence and its commitment to perfection shows in the wines. 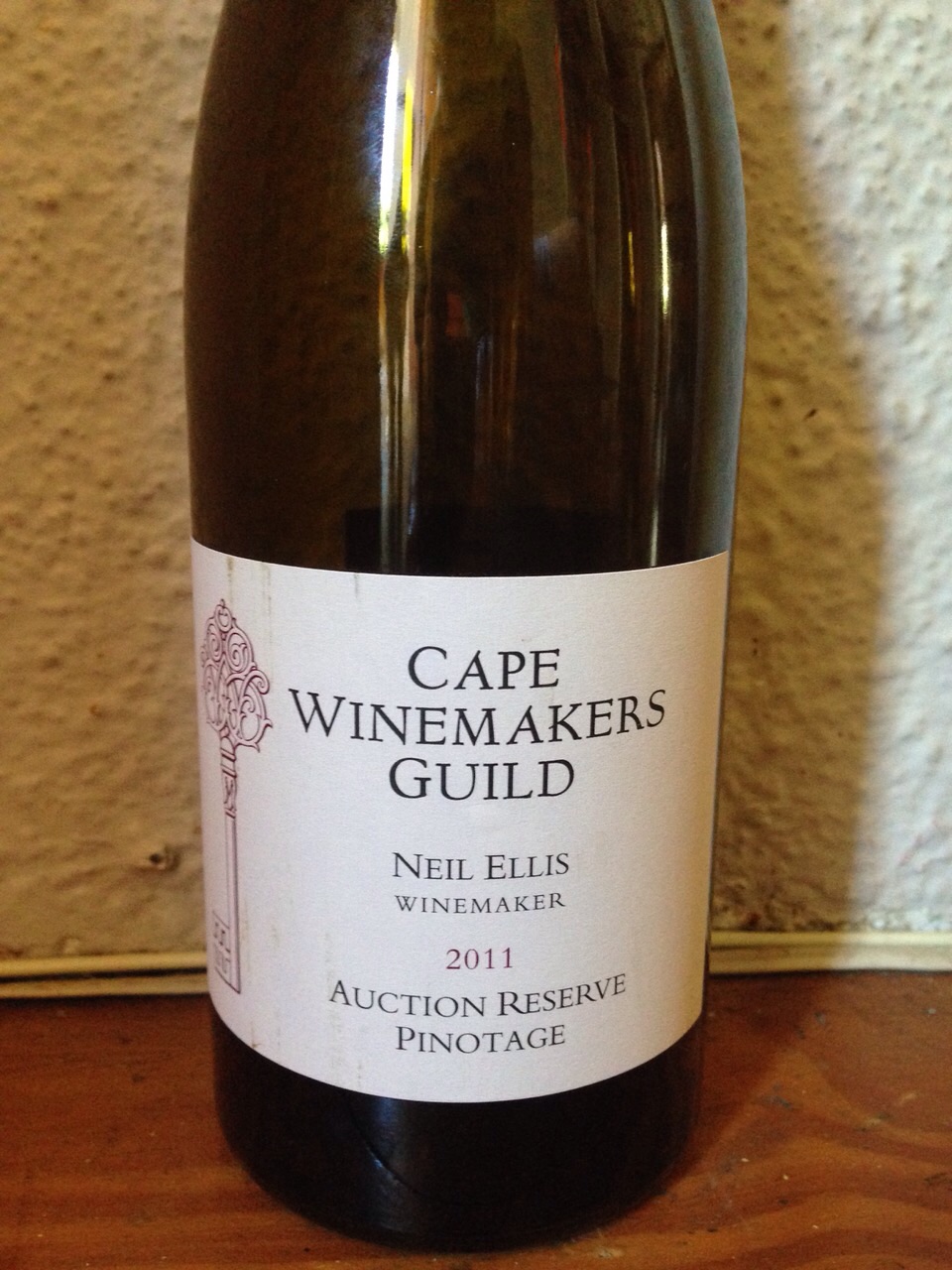 Thus Neil Ellis CWG Pinotage brings three great brands to the party: Ellis, the great grape Pinotage and the CWG ethos. As they say in the classics – what is there not to like?

I have had some grand Pinotages in my time, and this one has shifted the goal-posts just as the Kanonkop Black Label 2006 did. Like all Ellis’s red wines, deliciousness and succulence is at the heart of the matter. The Pinotage oozes a refined fruit core, with heady hits of blackberry confit, overripe wild strawberry and black wine gums. The rim is pure and plush, with a follow-through of sagebrush and dried thyme with a slight, yet heady, lining of French tarragon and Marmite. The mouthfeel is textured, weighty, dripping with moist letters of love and poetry.

It is all, from drops first to last, a long dose of pleasure. There is a slight woody smokiness on the nose, implying that a further five to six years aging will bring this wine into another dimension.

A beaut such as this does not really require any food, but I had to have something if I wanted to finish the whole bottle. Which one really has to do to gain a complete understanding of the wine. And here a good English Cheddar cheese, one of Britain’s few contributions to world cuisine, does the trick perfectly. The Wyke Farms Mature Cheddar from Shoprite is a pretty good example, and did a great job of accompanying me to the last delicious drop.

As the actress said to the bishop: I really hope there is more where that came from.

One thought on “Great Stuff from the Guild”