My name is Earl, and I have a problem with chickens.

It all began on my Uncle Frikkie’s farm, when I was about eight or nine. One night I decided to sleep in the straw, under the stars that sparkle so gloriously in the night sky over the Sandveld, between Piketberg and Lambert’s Bay.

In any event, little me waited while all the grown-ups were asleep before taking my Superman sleeping bag and setting-off for a lovely pile of straw between the cowshed and the pump-house.

I inserted myself in the sleeping bag, nestled between the straw and looked longingly at the stars. I looked for shooting stars, and saw two! I made two wishes: I wished I played rugby for the Springboks, had one million rand and that Wilmien Pikeur in Grade 3 would give me a smooch without me trading Peck’s fish-pate sarmies to get one.

Well, I drifted into a deep and blissful sleep. The evening was cool, not cold.

Dawn awoke me. And I felt warm. Yawning and rubbing my eyes, I felt hot. From within the sleeping bag. Hot and wet. I looked in the bag and was greeted by a horde of cackling chickens. They had abandoned their coop during the night. Finding my sleeping bag, they had crawled in. During the evening they shat all over the place, too.

I jumped up out of my bag, screaming. I was covered in shit and feathers and one or two gripping, and tried kicking them as they ran off, screaming into the distance.

I have hated chickens ever since. And made a vow to eat at least two of the things a week. Preferably after decapitating them myself. With a blunt axe.

In any event, I have a recipe designed for those with a similar problem. Although you don’t have to have a chicken phobia to enjoy the end-result. Its damn fine. It is called Up Your Jack, Chicken. 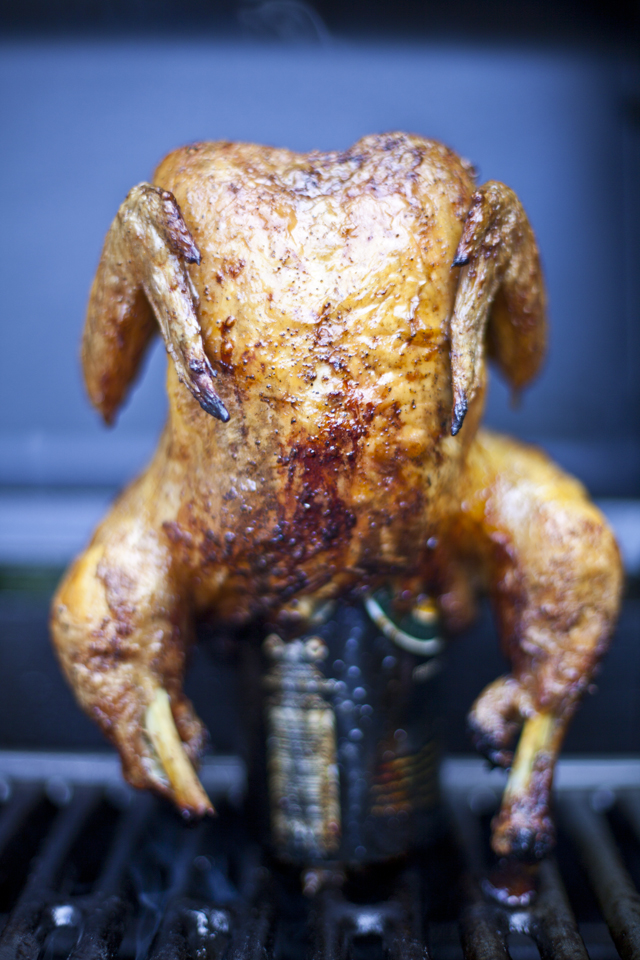 Needed for four to five people are:

1 Can of beer, preferably a Long Tom

Sever chicken’s head with aforementioned blunt axe. Once your laughter abates and the chicken has died, pluck the bird, cut off the head and feet and get someone to clean-out the insides.

Rub some herbs into the chicken’s arse, also referred to as the “cavity” in those poncy cookery books. I also like to loosen some of the skin on the breast and stuff herbs between the flesh and skin.

Right. Take the can of beer and drink about one third of it. (Another dead chicken always calls for celebration.)

Place the can of beer on a flat surface and neatly mount the chicken on the can. Insert the can as far as it can go into the arse. (Those who do not know what I mean, go and see the movie Brokeback Mountain )

Your chicken is now mounted on the can in an unflattering position.

In the meantime, you have made a fire in your Weber or other braai kettle. Use the indirect method, which means the coals are shut-off on the sides with those metal clips.

You can know place your anally-impaired beery chicken, together with the can, between the coals. Or on top of the grid. Just as you please. But I like it between the coals for that full roast effect.

Close your Weber. What happens is that the beer heats-up, causing the steam to rise into the inner sanctity of the chicken. It cooks moist on the inside, but crisp and golden on the outside.

To get that beautiful crisp skin, dab it with butter every 10 minutes and sprinkle with ground salt.

About between 45 minutes to an hour, and your chicken is beautifully cooked.

(Instead of beer, you can use a can filled with wine or fruit juice, or both.)