In their song “Here at the Western World”, the greatest rock band ever – Steely Dan – are welcomed “with sausage and beer”. But in the real west wine world, chances are you’ll be greeted with chouriço and Portuguese Colares wine.

Colares is the most westerly wine region in Europe. Just ocean-side of Lisbon, this is the kind of place that makes you wonder what the early wine pioneers were snorting when deciding to lay-down vines in this here godforsaken patch of earth.

First, the soil is deep sand, sand of the kind that requires removal by enema and eye-brow tweezers should you choose to sit among the vines. And then there is the wind pumping relentlessly off the Atlantic, the gale heaving straight into the vines growing 200m from wave-break. To avoid the wind, the vines snake along the sand like leafy green serpents. The canes are only raised from the sand by wooden stilts once the berries start setting so as to prevent the fruit being sand-brushed and eaten by hungry shipwrecked sea-slugs.

It is hard-core grape-growing, a labour of love. And only 10ha of vines remain in the Colares area. Once there were over 1 100ha, but some residential land development saw the leafed serpents plucked out to build condominiums, surf-shops and Fado-themed massage parlours. Thankfully, the remaining 10ha of vines are now protected. 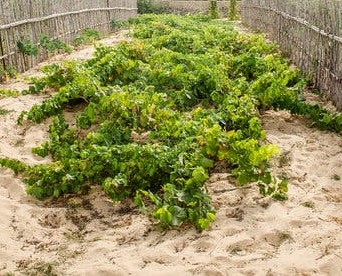 Two varieties grow here: the red Ramisco and white Malvasia Colares, not to be confused with the more famous Malvasia of Madeira. One positive aspect of the sand is that phylloxera never reached Colares as the disease-carrying bugs couldn’t make it through the sandy turf.

But it could also be that phylloxera damn-well started in Colares – the pummelling wind just blew the critters out west to Spain, France and Italy.

All this talk, however, means nothing if you don’t taste the wines. And here our friendly wine-bearer, Joaquim Sá from Amorim, fetched some vinho from Colares and put them out for a tasting the other evening.

The four Colares wines were all white and although the producers won’t mean a thing I’ll list them anyway: Colares Chitas 2014, Monte Cascas 2014, Arenae 2016 and Viuva Gomes 2016.

The winemaking is just as rudimentary as the grape-growing, the latter reaching a highlight when some Porra is called in to shove a wooden fork under a vine cane to stop the grapes from being sandpapered. In the cellar grapes are crushed, pumped into foudrés of old Brazilian mahogany and left to age for a year. Drawn-off and bottled.

That’s why I found the four wines tasted surprisingly fresh, bright and pure. With the back-story and all this wildness and windswept desolation I was expecting something between dry Old Brown Sherry and forgotten vermouth, with a sediment as thick as a Portuguese custard tart after Lent.

And what incredible variation is there not in these wines all made from grapes growing within 10 hectares of each other, and from the same variety to boot.

The Colares Chitas 2014 is shiny, a hint of grapefruit and cut daffodil stem balanced on extreme delicacy, so fragile you don’t want to swirl the wine in your mouth too energetically in-case the tender juice starts making strange noises. Long after-taste running up to the nose, but in a pleasingly evasive manner.

And then the Monte Cascas 2014 comes and pulls you in a totally different direction. Here are notes of dry fruit, a bit of salted caramel and a definite line of cinnamon. On the finish, however, the wine carries a firm, hairy grip making it feral in a pleasant, exotic way.

For me, the third wine – Arenae 2016 – was a knockout. There was more citrus on this than in a grocery store in ’n flu season, and all the pungent sour stuff I like: Green limes. Thick-peeled lemons with juice acerbic enough to make your mouth purse and eyes water. Lots of cool yellow grapefruit. All this drifting in a mist of sea-spray, providing an experience of supreme invigoration and well-being. Another bout of wine fascination.

Here at the Western World.