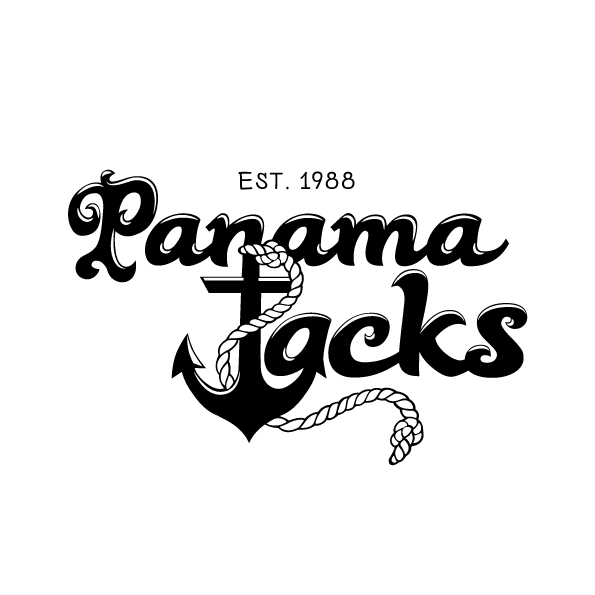 It has been just over six months since Panama Jacks, a waterside seafood restaurant in Cape Town, moved its premises from one side of the docks to the other. But no, this establishment should not have been transposed from the industrial Quay 500 on the Cape Yacht Club side of the harbour to the E-Berth Cruise Terminal. A better move would have been hitching the whole place to a tugboat and towing it out into the middle of Table Bay, way past Robben Island, and then have it sunk into the Atlantic Ocean’s murky depths courtesy of a few gun-blasts from a naval frigate.

When it opened in 1988, Panama Jacks had an agreeable tacky look-and-feel, allowing one to down ice-cold Castle Lager from quarts while enjoying nourishing slabs of wreck-fish or hake with perfectly cooked chips. Service was fittingly matey and familiar, yet attentive. The quaintness of eating in a wooden shack at water’s edge in the salty, diesel-fumed air of a working harbour felt genuine and comforting. There was even a takeaway for dockside workers, always a good sign of authenticity as these are the kind of folk who could make inconsiderate cooks disappear silently and painlessly for frying chips in old, rancid oil.

Tourists keenly frequented the joint, hence the presence of pricey seafood things like crayfish and abalone making their way onto the menu.
But over the past decade a tiredness crept into Panama Jack’s offering. Service became nonchalant and slapdash, while the quality of the cooking moved towards the industrial side sans any attention and care into the preparation of the satisfying simple fare one frequents joints like these for.
I decided to give the new place a try, hoping that the re-locating would have sparked a desire among the powers that be to improve the situation that had existed in the old venue.

Panama Jacks is now located on the first floor of the Cape Town Harbour’s passenger cruise terminal, with a stunning view of the bay – unless, of course, there is a ship the size of a small shopping-mall parked out front. Then your dining experience is complemented by the sight of port-holes, life-boats, brass-fittings and Asian deckhands on smoke-break. 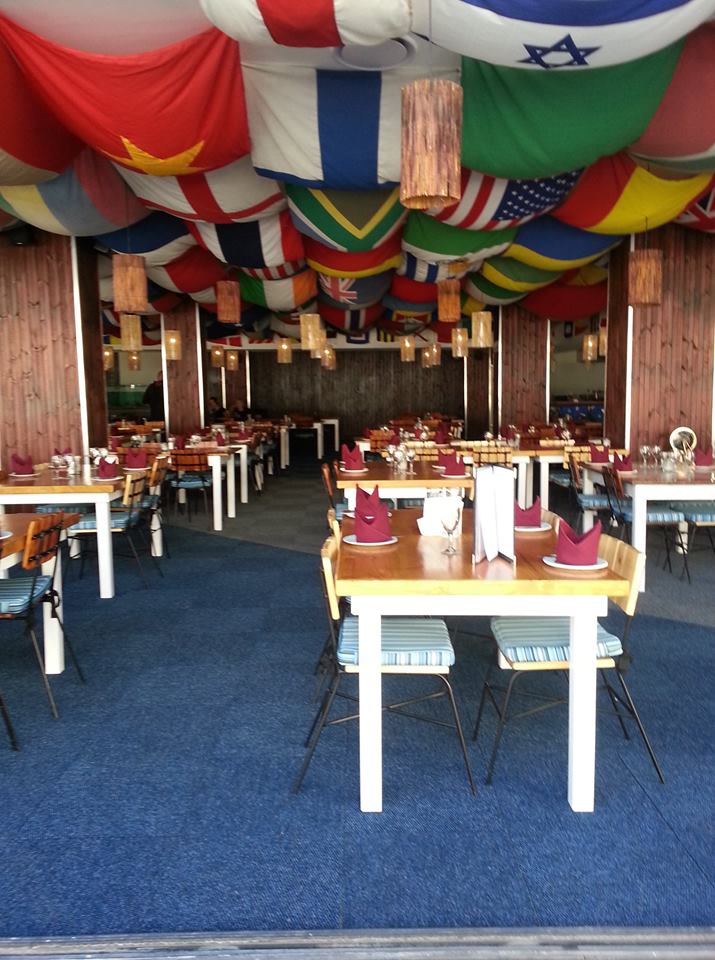 The restaurant space is cavernous. The ceiling is high-enough to thwart an East European pole-vaulter. The floor-space’s expansive wall-to-wall blue carpeting shows an uncannily close resemblance to the recreation halls of a Dutch Reformed Church building in the Cape’s Northern Suburbs. The flags draping from the roof add a swipe of colour but still there is no sign of casual comfort, which the old location did have if nothing else.

The menu is familiar. Fishy appetizers including oysters, pickled fish, calamari tentacles, mussels and Asian-affected tuna. Spring-rolls and snails cater to non-seafood eaters. Mains include various fish-dishes, prawns, crayfish and abalone. There are pastas, while the grill offers rump and duck.

And yes, a sushi menu as well.

My dining partner had just yachted into Cape Town from Tahiti, having for four months subsisted on dehydrated lasagne, Cup-o-Soup and ProNutro mixed with milk-powder, so I reckoned some hearty cooked food would be welcomed.

I ordered the Namibian oysters while Sailor Girl headed straight for the Cuban soup of bean and lamb, something the Cup-o-Soup recipe inventors still had to concoct.

The oysters were fresh, tiny and edible, live molluscs being hardly possible to stuff-up. As far as the soup went, the yachting lady ploughed into it like an anteater who had been following an enforced vegan diet for a year. Her hunger was, however, not so much the result of the months at sea as it could be placed on the bottle of Diemersdal Sauvignon Blanc we had procured.

Having been alcohol-free during the entire voyage, Sailor Girl was energetically pickled after two glasses of wine and would have eaten raw pizza dough covered with Christmas beetles if placed before her.

I stole two spoons of soup and Cuban it might be, but possibly the kind served to prisoners locked up in a Havana jail-cell for illicit cigar-trading. It was watery and insipid, hardly any black beans to the bite and the only piece of lamb I encountered was a tiny stringy bit so thin it could not even get stuck between my teeth. 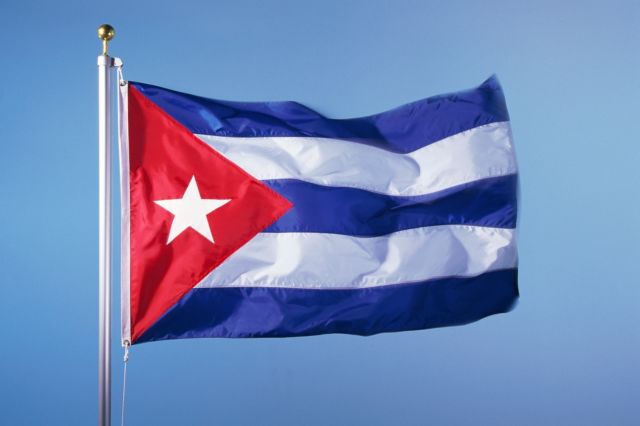 For the main courses, I thought some grilled tiger prawns would do the trick, while the sea-farer had true hunger to be sated. Linguini Marinara it would be for this pasta-addict who said that the thing she most missed at sea – besides the chance to shave her legs and a motionless toilet seat – was fresh pasta.

To prepare her for the worst, I ordered another bottle of pleasantly mind-numbing Sauvignon Blanc.

Actually the linguini did not look so bad – if you learnt to cook pasta in the kitchen of a school-hostel for kids in need of reforming, that is. The linguini was boiled to a level of stodge that would have made Oliver Twist shut-up about asking for more. Looking at the pasta hanging from her fork like a flaccid chameleon tongue, I would have to spend four years at sea before letting this pass my lips.

My prawns were prepared by a chef who was, seemingly, moonlighting at the Panama Jack’s grill as a diversion from his day-job at the Maitland Crematorium. The shells were black-red and the flesh inside had that dry, overcooked look one reaches when following fish-recipes from Afrikaans magazines out of the 1970s. 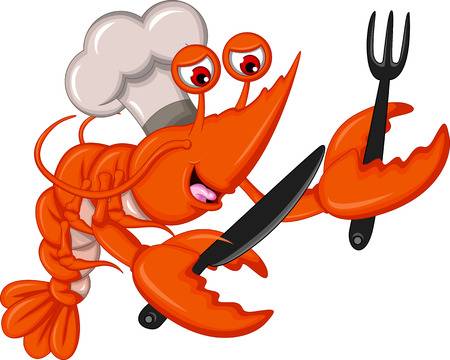 The peri-peri sauce I had ordered was more sweet than hot, but I nonetheless smothered the crustaceans in search of flavour. Yet the tastelessness of the over-cooked, over-frozen prawns managed to cut through the sauce. In an attempt to source additional nutrition, a portion of chips was ordered. How wrong can a seafood place go with chips?

Well, the chips complemented the prawns accurately, being just as devoid of taste, as unappealing in texture and downright disrespectful of the paying diner. They reminded me of the fingers of a dead infant who had succumbed to frostbite while collecting moose droppings in the outer wilds of Alaska.

Sailor Girl was ploughing through her pasta like a porpoise through a modestly sized ball of baitfish, making illicit-sounding slurping noises in the process. But she had space to fill. I grabbed a mouthful, and although the pasta was the consistency of body-temperature tapeworm, the tomato-seafood sauce had a bit of bright flavour. So much so, I put some on my prawns in a futile attempt to perk things up.

Look, I want to like Panama Jack’s. Cape Town needs an authentic harbour restaurant removed from the kale-and-truffle oil, drizzle-and-morsel joints found on the Waterfront. But you can’t like something that does not like itself.