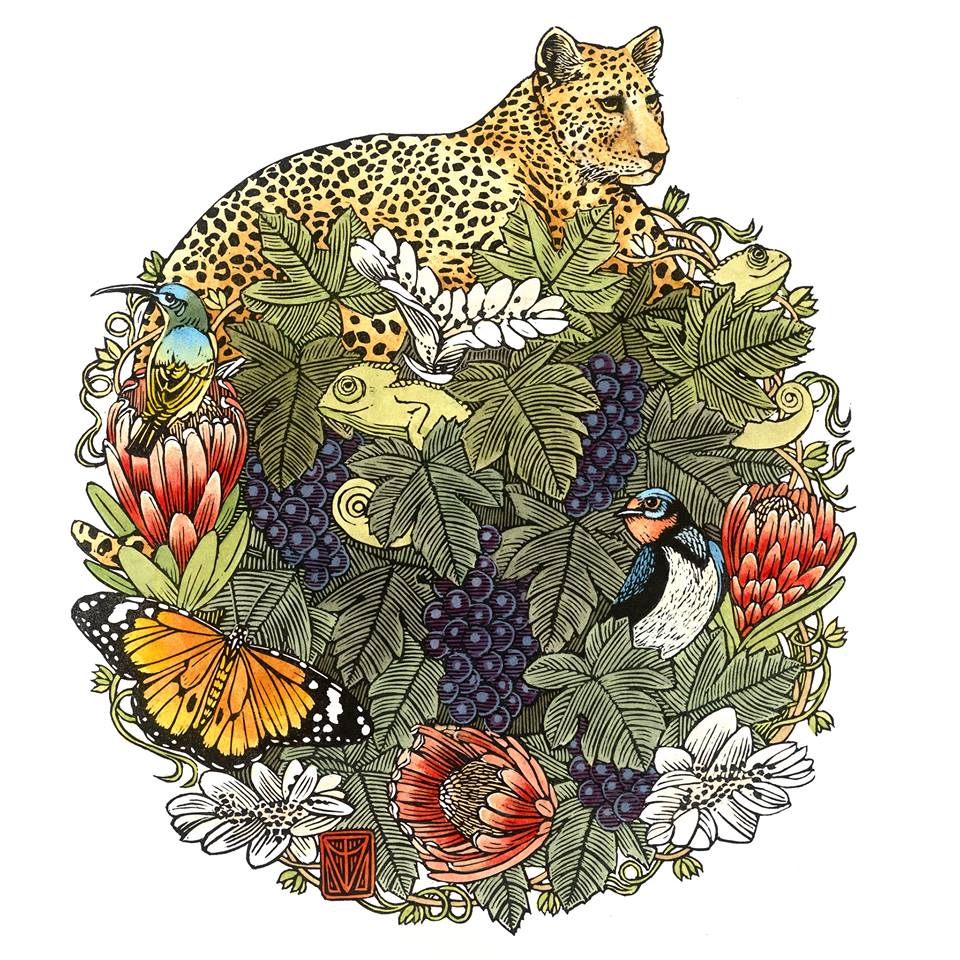 This year I and my fellow descendants of the French Huguenots celebrate the 330th anniversary of our forefathers’ landing at the Cape of Good Hope. Francophiles and proudly so, we have of late been swirling glasses of Burgundy Chardonnay, downing huge glugs of Armagnac and jetting-in mounds of Roquefort and Comte while attempting to hum Le Marsellaise without stumbling over that tricky seventh beat-change.

Our Mother Nation joined the party by winning the Soccer World Cup, allowing us to show the world the art of celebrating in style. Charles Aznavour’s death brought about days of collective mourning in the kind of stoic ostentation only the French are capable of.

All this gloriously spirited Franco action, and then the Germans come along with two wines that practically knock-over most of the South African wines I have tasted this year.

Kontras is a boutique brand, the brain-child of Paarl-born, former-Stellenbosch winemaker Chris Swanepoel who is currently head of marketing at mega German wine distributor Mack and Schüle in Stuttgart. Riding shotgun on Kontras Wines is 100% German Johannes Kopp from Weingut Kopp in the Baden region where he specialises in distinctive Spätburgunder (Pinot Noir) and Weissburgunder (Pinot Blanc) wines, with the grapes grown on various well-known, historic sites in Sinzheimer and Baden-Baden Rebland. Jawol?

Both Chris and Johannes fall into the age category for which South African wine circles like to use the cheesy term “Young Guns”, yet in Kontras’s maiden offering things are discernibly classic, Old World and disciplined.
Two wines have been released, namely a Kontras Cabernet Sauvignon 2017 and Chenin Blanc 2018, both proudly Stellenbosch filled in the regional branded bottle and all. The pure, definitive and accurate expression of each variety is offset by a chirpy and evocative label incorporating various aspects of local nature that are bold and forthright, while sidestepping the trap of critter-cringe.

When their Germanic peers are having the crotches frozen off their lederhosen, Chris and Johannes jet into the Cape summer to make the wines, hands-on. With the Cabernet Sauvignon sourced on Simonsberg above Muratie Estate and the Chenin Blanc from a 40yr-old patch at Sonop, this Stellenbosch-terrain is familiar turf to Chris who cut his teeth with stints in various cellars including Kanonkop and Simonsig.

In making the Cabernet Sauvignon 2017, the wine spent 34 days on the skins before maturation in barriques of French oak, 70% new. Being just out of its straps and recently bottled, I admit to having had preconceived perceptions as to what to expect here: Simonsberg intensity; unsettled tannins; suppressed fruit of youth…all this amplified by the memory of the dry conditions leading up to the harvest.

The reality was, however, vastly removed from assumptions, as is so often the case in the wine world. For here is a Cabernet Sauvignon in a style I have not quite experienced from Simonsberg and its blue-blood lineage of producers such as Kanonkop, Rustenberg, Muratie, Delheim or Thelema.

Kontras Cabernet Sauvignon’s major impression is one of expansiveness, of blue-skied vistas with plenty of air, or the broad Karoo horizons found in Walter Meyer’s paintings. It truly fills the palate, without overpowering the senses. A soft robe of prunes and blackcurrant are offset by mellow lines of fynbos and dust, coaxed by tannins of the harmonious kind. Broad and plush, but – at this stage – no direct juicy, sappy characters are to be found, making everything intriguing, mysterious instead of being a wine you can place a stamp on stating: “Got this, I know.” Were a reference called for, mine would be St Julienne. 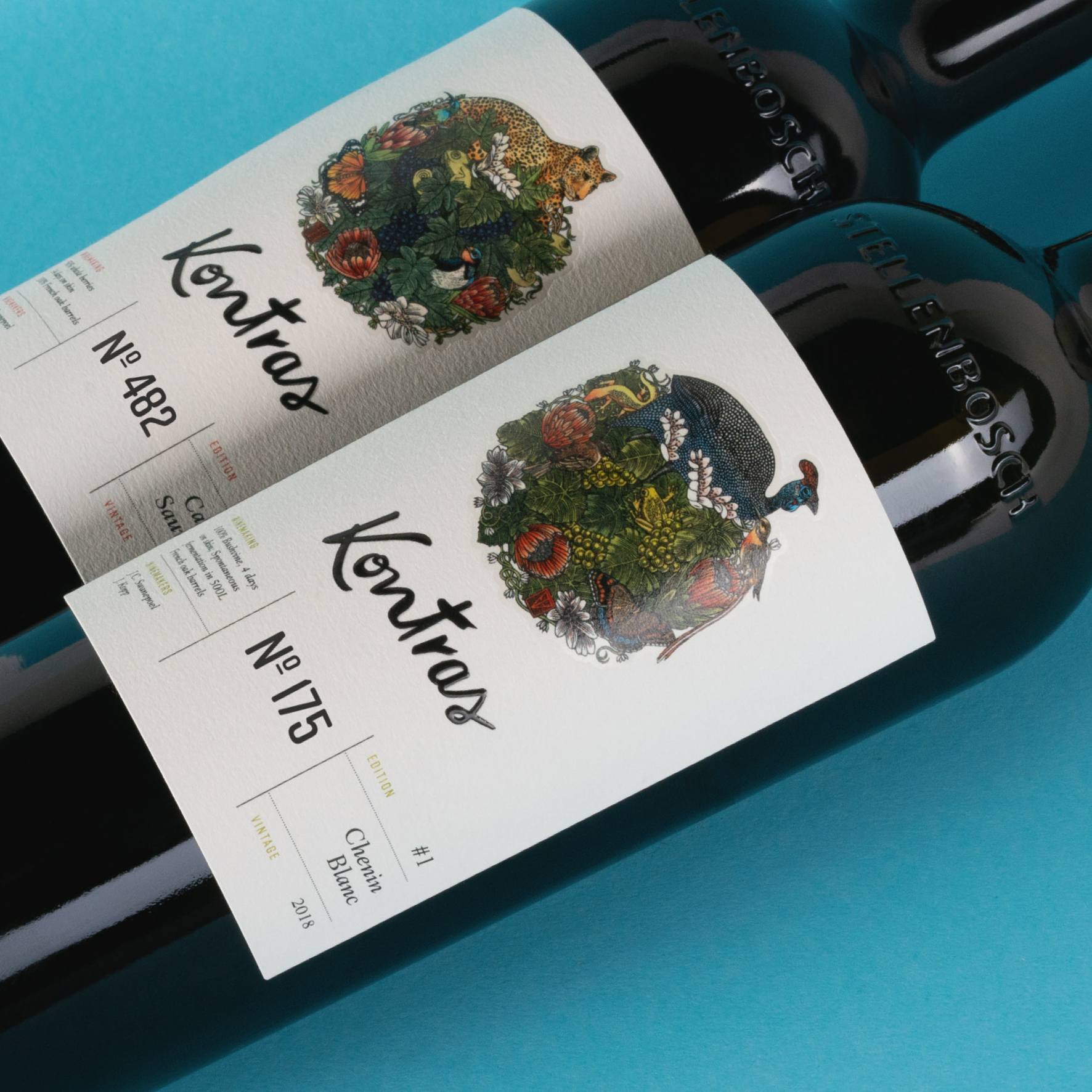 For the Kontras white, the German-South African duo of Swanepoel and Kopp selected Chenin Blanc from 40 year-old bushvines. Chris reckons this wine allowed “Johannes (Kopp) to put his German influence on the wine. Low alcohol – 12.5% – with leanness and acidic backbone.”

To get there, the grapes were fermented spontaneously in 500l barrels, spending another six months in vessels of the same size, 40% new.
Initially, cork just-pulled, the Kontras Chenin Blanc 2018 was as tight as a dirndl on a well-rounded Oktoberfest damsel who had been working overtime on the bratwurst stand. It was decanted and the aeration worked wonders, hence my initial comment that this was the best Chenin Blanc to have passed my lips this year, and definitely one of the best white wines to have this honour.

Firm and rocky, the wine has a tantalising sour green-plum note which to me has always been the vinous equivalent of the culinary term umami. I don’t care how old or how sweet, how oxidative or reductive or how alcoholic a white wine is: if it portrays the lifeblood of an edgy vigour that is alive and alert, then it is game on.

Seeing that Kontras Chenin Blanc 2018 admits to having a Germanic vision and personality, I don’t have to sound smart by saying so myself. But it is a wine fixed on unfettered purity, stern and alert and very fresh, with lasting notes of green citrus, loquat and brine in which some fleshy pimento-stuffed Spanish olives has been lying.

Priced at R500 for the Cabernet Sauvignon and R400 for the Chenin Blanc, and made in limited and numbered volumes, these are set to become collectors’ classics.

Any Hugenot descendants who have made wines of such class this year, you know where to find us…..