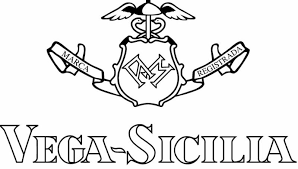 Like Simba’s tomato sauce-flavoured chips, fresh abalone, Iron Brew and red Vienna sausages, the taste of wine made from the Tempranillo grape still sticks to me, conjuring memories of an ill-spent – yet well-fed – youth. Anyone back-packing through Europe in his or her late teens during the 1980’s and finding yourself holed down in Spain, will attest to consuming Spanish Tempranillo – mainly from Rioja – by the bucket-load. It was plentiful, ubiquitous and available in cheap flagons. A burst of berries, that wanted comforting alcoholic hit and then a plush finish, the result of Rioja makers’ love of using American oak.

Tempranillo is also a grape that, to my mind, expresses a sense of place like few others. Put a selection of wines from Rioja, Toro, Valbuena de Duero and Portugal’s Douro region alongside each other and, sorry, but you are going to have to be a serious anorak to detect that the wines are made from the same variety. The Douro, for example, makes a black, herbaceous and stony wine, while some Riojas lean to perfumed Volnay Burgundies.

When considering a love of Tempranillo we all strive for the unattainable, namely perfection. And surely the closest one can come must be the incredible wines made at Vega-Sicilia in the Valbuena de Duero region in north-west Spain. I first encountered these wines at the table of Danie de Wet from De Wetshof and have subsequently become something of a Vega-Sicilia acolyte, a status further cemented by a recent tasting of wines put on by Great Domaines who import these beauties into South Africa. To have Pablo Álvarez from the proprietor family and current MD show the wines was a rare privilege, about as rare as finding a Spanish footballer who accepts referee decisions.

Vega Sicilia’s wines are about geography and the commitment to perfection. The Valbuena de Duero is, as Pablo explained, not an easy place to make wine. Lying 700 to 900m above sea-level, climate is merciless. Icy winters. Through spring, frost is a frequent partner to viticulture ambitions. Summer hail smashes entire blocks of precious ripening grapes. Yet it is in the summer climate that the grapes ripen in extraordinary environs with daytime temperatures nudging 45°C while cooling down to 7°C at night.

The heavy limestone soils are deemed a major contributor to grape character, and in the cellar things are about as judicious as an Elon Musk space-tek laboratory during Yom Kippur. The wines spend a long, long time in a wooding programme comprising French and American 225 litre barriques as well as French oak vats of 20 000 litres, most new. Vega-Sicilia’s flagship Único is released 10 years after harvest, while the Valbuena 5° takes five years to get to market.

The Vega-Sicilia approach is heady and complex: fruit from parcels of vineyards is fermented separately using wild yeasts and viticulture is strictly organic; the winery cures its own American oak imported from Ohio and if the South African rugby team was as strict about selecting players as Vega-Sicilia is about choosing its corks, well, we’d be unconquerable world-beaters.

Pablo put all this across in a calm, methodical narrative, his minimal use of the right words and clarity of thought being something that would have impressed Ernesto Hemingway.

Then came the wines. They did not speak, they sang and then they roared.
Vega-Sicilia Valbuena 5° 2012 was made with 100% Tempranillo. The small portion of Merlot normally added did not make it in that year.

The wine is aged in French and American oak, wood bringing not just spice and tannin but a startling degree of brightness. It might be cold and unforgiven in the Valbuena de Duero, but the sun sure shines on that stuff from the glass. Not in a baked, porty way but in cascade of new morning rays lighting up the day to make the world a better place. 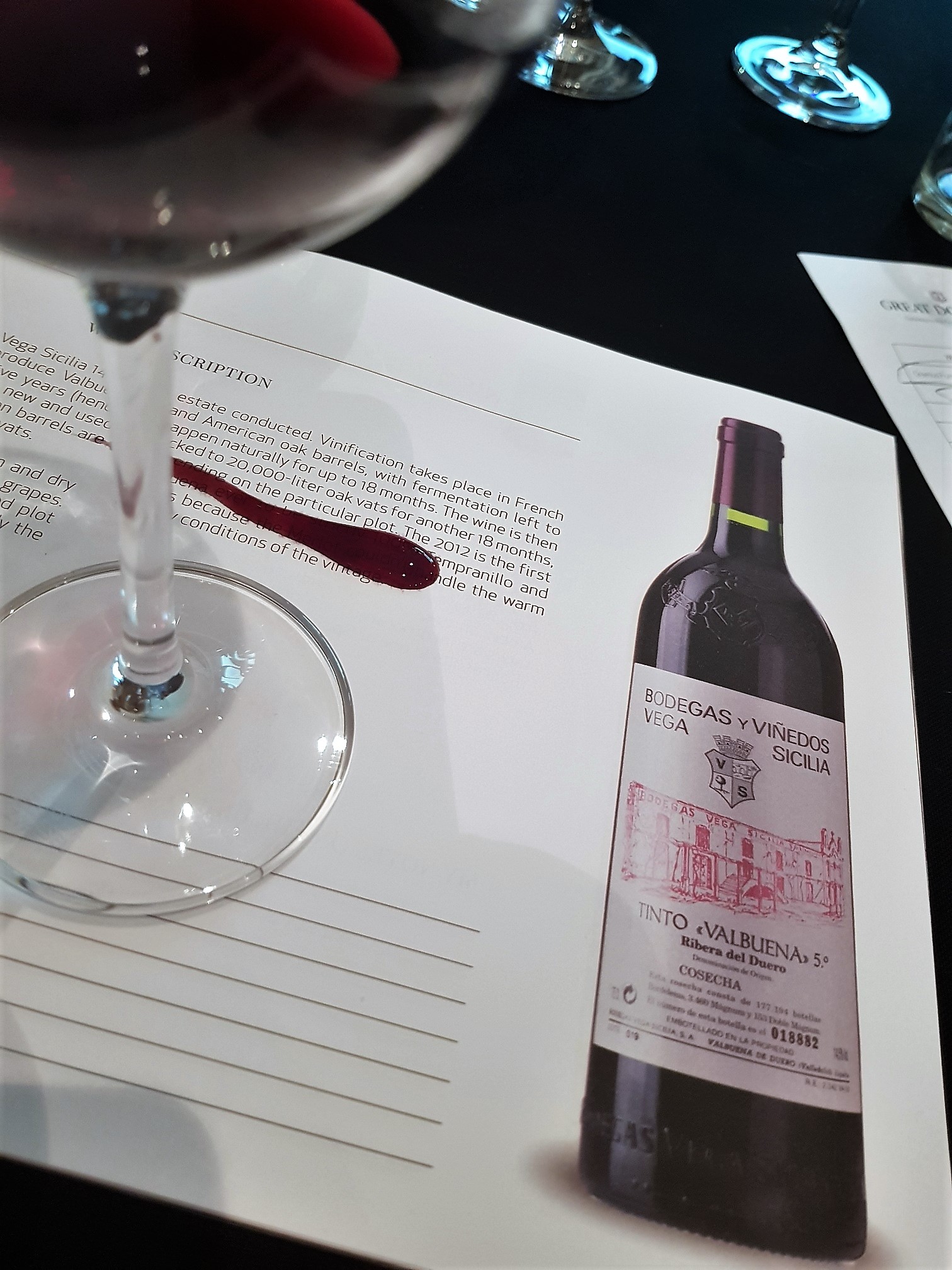 Red currants ripped from a wedge of fruit-cake meet citrus-peel and cloves. A fresh plum and iced-cherry surge fills the mouth, and you just want to keep it forever. When this ends there is the edge of dry kelp, ground dry oyster-shell and a whole wad of un-sugared strawberry confit.

One must take into account that this wine will only reach its peak in the next two decades, yet currently it is more exciting to drink than a perfectly executed killing of an 800kg bull in the Seville Corrida

Being one of the world’s true great wines, I made a little cross on the chest before dispatching the Único from Vega-Siclia. This began its journey way back in 2005, but tasted as if it had just been released from the paddock. 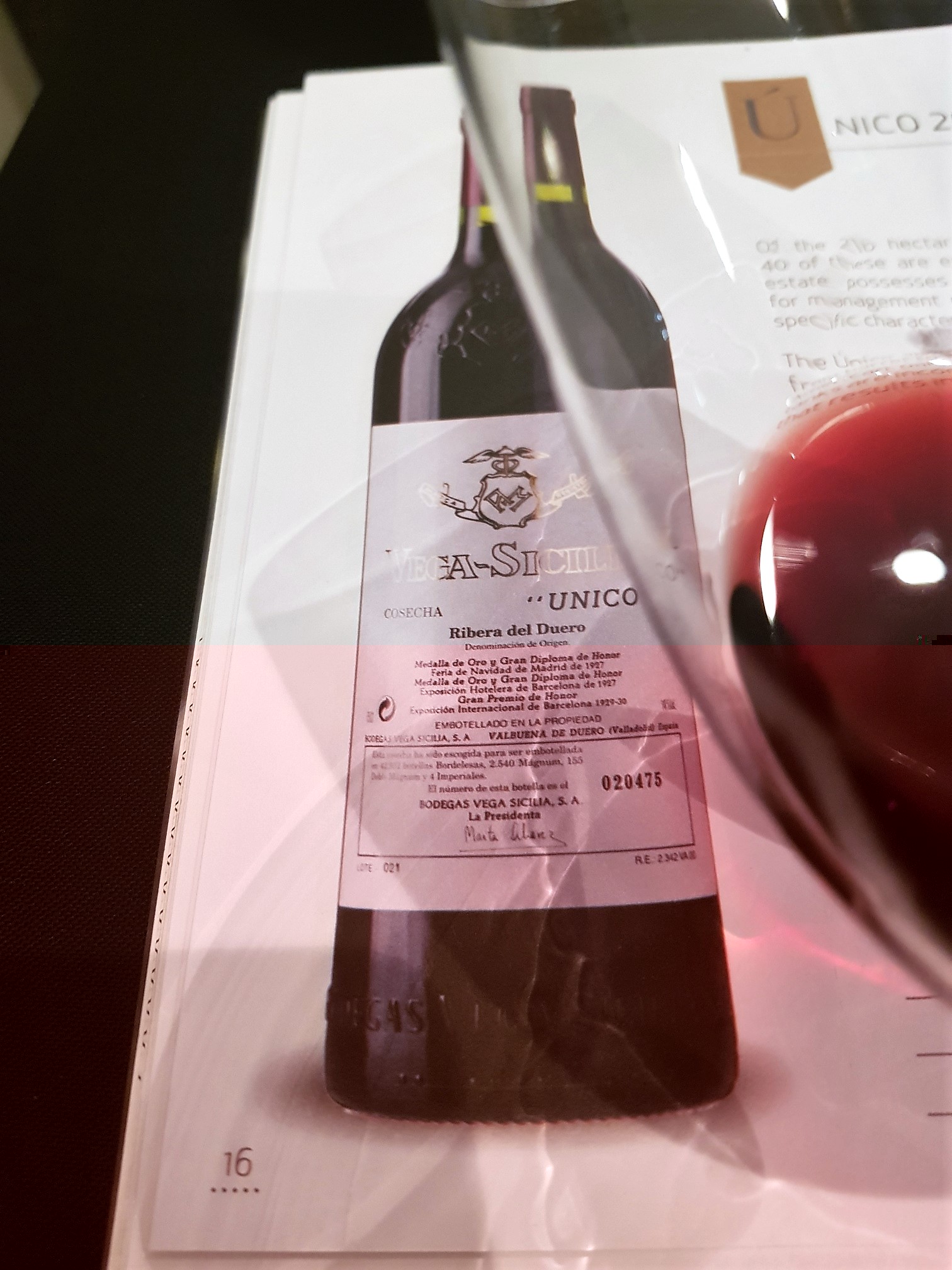 What makes these contained, sculpted tannins so extraordinary I will never know.

Believe it or not, this wine was bottled in 2011 after six years in wood and released after the 2007 and 2008 vintages as Pablo himself considered the wine needing more bottle time.

There is a slight whiff of fresh wood on the nose, but this flees in seconds as pine-needle, mulberry and fallen crab-apple takes offer, with a comforting smell of fresh linen. The attack on the palate is wild and spectacular, an explosion of colours, flavours and temperatures, all enough to make a late-era Picasso look like a pastorally boring English watercolour.

Sweet saffron and dried fig lurk, plunging through spilt bull-blood, sliced Jámon Iberico and iced raspberry juice. Ripped rhubarb and pickled beetroot keeps things lively, and the presence of the limestone soils lies in revitalising wave of maritime joy. Palate-weight is as balanced as a flamenco dancer before the night’s first shot of anisette, firm and muscular tannins dissipating before a curtain of velvety plushness drawn tight enough to prevent any heavy flabby bits from clogging things up.

Vega-Sicilia. This time, it is not just a Tempranillo memory that is made. It is a tattoo scraped with shards of glass steeped in an elixir that deserves having blood spilt for it. Any wine-lover has to taste it once in her or her life. Trust me, it won’t be the last.