I had retired my wooden spoon, vowing to never judge a Potjiekos Competition again. Some 15-plus years of forced prodding, sniffing and eating too many gruel-like, sloppy concoctions from black cast-iron pots had caused an unsightly rash between my tonsils as well as generating enough peptic acid to radiate a small inland lake in Eastern Europe.

What was most upsetting was that during this decade-and-a-half it had dawned on me that the nation has lost its once-honourable Potjiekos heritage. Most of the practitioners of what should be the art of the potjie were merely chucking the first edible thing they could find into a Falkirk three-legged pot, bunging it on some coals and after a few hours of disconnected drinking and inattentive discourse on various topics, the slop would be dished up for an unwitting judge to voice an opinion on.

When some smug-arse at a competition in Franschhoek produced a pot of macaroni simmered in a sauce of processed cheese and beer, finished off with a few handfuls of biltong, I knew that my relationship with and support for the clan of competitive potjiekos makers was over.

There were just too many entrants with no knowledge and respect, nor a willingness to impart a bit of effort into their attempts to cook a decent pot of simple food over an open fire.

Not even Homo naledi would have touched the stuff that was being presented as what should be one of South Africa’s proudest culinary contributions.

Has my faith in humanity been restored after a recent trip to the Voor-Paardeberg wine region? I am still taking it all in, but the invitation to judge the area’s Potjiekos contest on Heritage Day left me with a warm feeling that the potjie culture is still alive and well – in the right hands, of course.

Rarely had I and my fellow-judge Bernard Kotze come across a field of potjiekos creations of such a high standard. What started out as a bit of subtle twisting of our rubber arms by Jane Eedes from Voor-Paardeberg winery Vondeling ended with us sweating over the decision to decide on a winner, lusty appetites treated to plate-after-plate of deliciousness from the fire pots.

Each of the seven teams produced food qualifying for a 100% Pure Potjie pedigree. Sauces were never too long or lacking in their presence. Not one piece of potato or carrot was soggy or under-cooked, and never were our keen, skilled palates exposed to the horrifying flavour of a pot that had burnt as a result of poor heat-management. 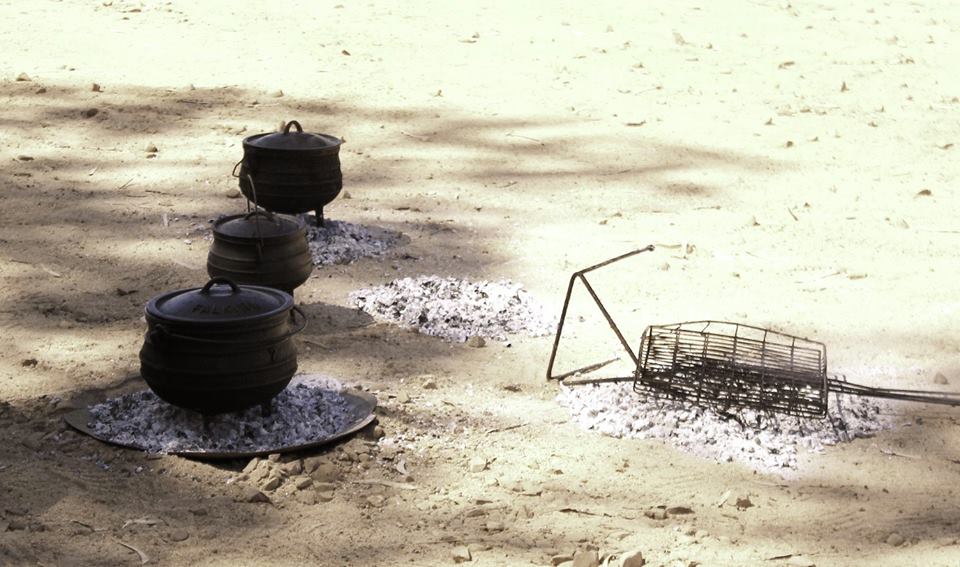 All entrants chose real meat, with game and lamb proving popular choices. Once again, the dead animals were cooked through but never dry, flavoured by the various sauces and seasoned by the judicious use of herbs and spices which were never allowed to subjugate the meat.

This ranged from tender morsels of eland in a tangy sauce verging on the exotic sweet to sumptuous lamb shank cooked in Port; fall-off-the-bone tender oxtail and bite-size morsels of beef in mushroom and cream.

The Lions Team from Stellenbosch combined gemsbok and lamb in one pot, the unctuous fat from the lamb elevating the riveting gamey flavours to new heights. Jane Eedes and David Clarke used kudu shank in a subtly seasoned broth allowing the goodness of bone and marrow and silky-soft meat to provide a plate of food it was damn difficult to leave alone. Killer tomato salad and terrific fireside-toasty sandwich, too.

Bernard and I were hitting scores of 18 and 18,5, wondering where this was going and how we were going to pick one winner that deserved the cherished Voor-Paardeberg Trophy, one of the most sought-after awards in cooking circles.

Then we hit the lamb shank cooked by Matthew Copeland, Vondeling winemaker. This was the Usain Bolt of lamb shanks, the Mona Sheepa, the Main Enchilada…..the pieces des resistance to the max.

The thing had been expertly cooked in one beautiful piece, lying on our plates like something you’d expect an Egyptian prince would want to be buried with. Hours of slow cooking in the warm, dank interior of the cast-iron pot had allowed the meat to break down, releasing rivulets of fatty teardrops and sucking up the seasoning Matthew had added to the dish.

We pulled the shiny strips of flesh from the bone with forks, smelt the comforting savour aromas and tasted meat that came from the lamb, but had been cooked by the soul.

There could only be one winner. And this was it.