One of the rules about imbibing states one should never drink alcohol when thirsty. I never got the memo.

Thirst, real throat-scorching, spleen-drying thirst can for me only be quenched by a few healthy slurps of cold booze. Beer, icy and foamy, is an obvious candidate. Novelist Jay McInerney even used beer when reviewing a particularly good batch of cocaine in Bright Lights, Big City. Something about the snort of Bolivian marching powder being as gorgeously satisfying as a “sip of cold beer on a hot summer’s day”.

But since that rush of a novel, Jay has pretty much traded in the powder for wine, becoming a writer of beautifully energetic wine columns while still plying his trade as a skilled fiction man.

Writing today, thus, the invigorating snort may be compared to a sip of cool, dry Muscadet or Chablis, for in my book certain wines were just made to be consumed when there is a thirst going.

Vinho Verde is pretty much the go-to thirst-busting wine. Chilled to nun-thigh coolness, the acidic fruitiness and the slight petillance makes Vinho Verde great for real glugging in copious quantities to ward off the energy-sapping physical dangers which a chronic thirst is known to cause.

Here I have also been developing a thing for Sauvignon Blanc as a wine made for drinking in big cold quantities when things are getting a bit parched. Recently a bottle of Sauvignon Blanc previously unknown to me, The Fishwives Club, was presented during a thirsty spell. The wine was poured into a big glass, a couple of ice-cubes deftly added, and before you could say “your mother’s pilchard”, the bottle had been killed. 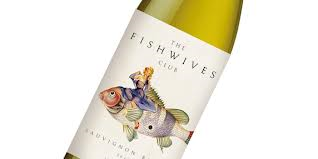 The Fishwives is made in Constantia at Buitenverwachting, and the label of a woman with a fish between her legs – well, stranger things have been known to happen in Constantia – pretty much reflects the irreverence of the wine. It is un-mistakenly Sauvignon Blanc with a brush of asparagus and eensie-weensy bit of gooseberry. But the mouthfeel is invitingly devoid of gum-scratching acidity, being confidently full with an enticing floral presence. On a hot day, slurping this wine feels like standing naked in the Gobi desert while a virginal Arabic princess pours cool water laced with rose petals over you.

Love the packaging, love the wine.

Being a full Iron Man, La Motte winemaker Edmund Terblanche must know a thing or two about being thirsty. So he will forgive me for respectfully stating that I killed his La Motte Pierneef 2014, which was so kindly sent to me, in about 22 minutes. This was done while recovering from a taxing reading I had to present at the Tamboerskloof WB Yeats Society.

Now, reciting “Love and Death” and all three books of “The Wonderings of Oisin” might not be as exhausting as running a marathon after 180 arse-aching kilometres on a bicycle, but it does sap soul and body, I can tell you.

The Pierneef Sauvignon Blanc has a good dollop of Elim fruit which gives it a salty, umami-ish edge ideal for pouring down the gullet. Once again, acidity is deftly balanced with fruit and the stony, mineral structure which makes this one of the Sauvignon Blancs I would actually buy. Cold. White. Dry. Brilliant.

Chenin Blanc is also a fantastic wine for glugging, and here I will always return to Perdeberg Winery and their standard unwooded Chenin. Although the fact that they have made dog-food promoter Jenny Morris the Perdeberg Wine Ambassador implies that the winery might just be taking its common touch a bit too seriously.

The Chenin Blanc 2014 is – literally, sort of – a peach of a wine. Not as dry as it used to be a decade or two ago, the wine is still laden with green peach and pear notes, harnessed in a splashy wet covering of mountain-stream purity and freshness.

Drink unashamedly fast when thirsty, and with general enjoyment when not.

Just remember to wipe your mouth and to powder your nose.

2 thoughts on “Thirst for Wine and the Divine”