Despite my immersion in wine – physically as well as professionally – the concern shown at South Africa’s low per capita consumption of wine leaves me with an uncharacteristic feeling of unease. Impassioned calls to get more people drinking wine are bandied about by industry forces and commentators in tones bordering on the pleading. As if the lack of wine-drinking is some kind of epidemic or national weakness.

No thanks, we are boozing it up quite nicely on the fermented juice of the grape called vino. And healthy the situation is not.

Let me give an example, which might sound trite but one far more concrete than the general so-called alarming statistic of South Africans “only” drinking seven litres of wine per person per year.

Chatting to a wine-rep the other day, he was feeling chuffed. Local consumption seems to be up. One of the areas he services is the Karoo town of Beaufort-West. And he is now doing R1,5m a week in wine sales, up from R1,25m a year ago.

Beaufort-West has a town of just over 50 000 people. And the wine we are talking about goes for R19 a litre, depending on what the competitors are doing. Yes, there are two other wine brands competing at this price-point in a market consisting largely of coloured people on social grants or employed at low wages in the factory, agricultural or domestic worker sectors. 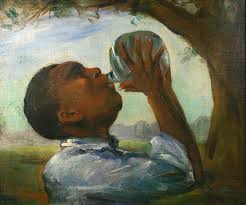 Of those 50 000 people, it is not known how many people are of drinking age, how many drink at all or how many avoid wine. But let’s say the three wine companies mentioned sell a combined sum of R3,5m worth of wine a week to the kind of impoverished communities we all wish to see uplifted, and ask yourself: can this be a good thing? Can we really be sitting in our air-conditioned seminar-rooms thinking of the lunch-time Chenin Blanc (wooded) while debating the “need for South Africans to drink more wine”?

And this is the situation in Beaufort-West, one of many rural Western and Northern Cape communities where the situation of pouring cheap wine down the willing throats of poor, vulnerable people keeps many South African wineries in business.

Of course, wine is not the only culprit. In fact, said salesman ascribes the increase in sales of cheap wine to beer becoming “a luxury, for pay-day evenings and Saturday mornings only”. For the rest of the week-end and week, it is bottoms up with your R16 to R20 a litre bottle or PET wine container.

Sure, if these poor, socially challenged communities of combined millions are not able to drink wine, they would slake their thirsts on something else. Beer, spirits, home-brews and the so-called ales, most of which are just fermented sugar-water.

But that is a narrative for another day.

My issue on this front is with the image and reputation of the South African wine industry. It is all good and well promoting estate wines, terroir-driven varieties and cool climate viticulture within the framework of a world-class wine culture within a dynamic society.

But how can this align itself in the same breath with the tens-of-millions of litres of absolute cheap rubbish wine sold every year to vulnerable communities? And at a hefty profit mind you – there is far more margin in an R18 litre of PET crap than there is in a standard R45 bottle of Sauvignon Blanc found at your suburban liquor outlet. 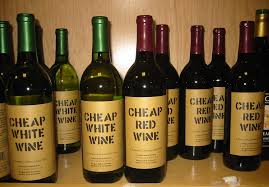 This is a dichotomy that sits uncomfortably, as it should. It is not easy driving a journalist through a beautiful vine-clad valley enthusing about the wine culture, and then hitting a town where half the farmworkers are sloshed out of their skulls, weaving about carrying plastic bottles of rotgut wine.

Any wine industry lives and dies by its image. Simple.

Unlike the wails for more wine-drinking, I personally fear an increase in per capita wine consumption, as it is at these low social levels where the increase is going to take place. The solution is therefore not to increase volume, but to increase value of wine sold to South Africans. Just as the challenge the industry faces in foreign markets.

Without it the industry’s image will continue to suffer, to the same degree as the plight of these ravaged societies. Almost.