Sweet is, surely, no sin. So why is the South African wine industry not making a bigger noise about the irrefutable quality of our sweet wines?

The general standard of fortifieds such as Muscadel and Jerepigo is stupendous. Ditto Noble Late Harvest and Straw Wines. And Portugal’s dynamo Port family named Symington deem South Africa as the only country outside Portugal capable of crafting a decent Port-style wine.

Yet these seem to be the unsung heroes of the wine industry, seldom being presented by the industry in generic line-ups aiming to schmooze foreign buyers and commentators. Yes, Pinotage, Chenin Blanc and Cabernet Sauvignon are strong calling cards with which to solicit suitors, but the general quality of South Africa’s sweet tray, as well as the tradition and culture it embodies, should make this a leading category when showcasing the national cellar.

Thoughts of this, as well as a mighty thirst over Easter, led me to succumb to the charms of two sweeties from Constantia. And no, I am not going to raise the historical facts concerning the penchants people such as Napoleon, Charles Dickens, Baudelaire and Jane Austen had for this wine. The only cornier clichés involve wine being made in the vineyard and the 1983 Tassenberg being so enormously tasty because a cellar-hand fell into the tank and was only found three days later.

The two Constantia sweets are the Klein Constantia Vin de Constance, a true South African icon, and the Grande Constance from neighbouring Groot Constantia. The Vin de Constance was the first one out of the blocks with production going back to 1986 in one of the sharpest marketing moves the local industry has seen to date.

And both say they stick to the original recipe that helped Napoleon forget his Waterloo whilst living it up on sunny St. Helena. The grapes for these wines are Muscat de Frontignan. Picked late and ripe and sweet. Crushed and given skin. Aged in oldish, biggish wood. And that is sort of that.

First-up for the Easter drinking was the Vin de Constance 2007 and a wine that scored 97 points in Bob Parker’s Wine Advocate which is about as big an achievement as smacking a hole-in-one with a cricket bat.

Pardon my French, but goeie bliksem this is a fantastic wine. 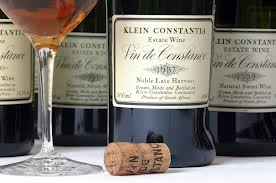 On the nose there is an intoxicating aroma of silkworm semen, dried Turkish apricot, honey-suckle and bruised organic saffron bulb. Tasting the wine is impossible. You have to take greedy slurps, gargle it and swallow noisily. Three, four times and only then do you get to the core of what Vin de Constance is about.

Think the sweetest, most luscious thing you can think of, like Highland Heather Honey, a sticky ripe peach or Max Factor Caramel Cherry Lipstick worn by Uma Thurmann. Take this intoxicating sweetness and inject a rush of fresh, invigorating acidity into it until the whole thing explodes and fills every sense. This is drinking Vin de Constance.

Groot Constantia’s Grande Constance 2010, like the Vin de Constance, packed in a bottle of antiquated relevance, displays a thread of commonality. Yes, it is sweet. Yes it is fresh. But unlike the virginal purity of the Vin de Constance, the Grande has a sultry spiciness with a hint of Brittany caramel which is extremely moreish. This broody character lends an evocative atmosphere to the wine, quite surprising seeing it is not yet out of its nappies and, like a bouncing rotund baby, should offer bundles of joy for years to come.

My score come to a desirable 989/1000, but a more mature sample would have brought it in line with the Vin de Constance.

Such lovely sweetness should actually be a sin as this would make drinking it that much more thrilling and edgy.