The real-estate adage of Location, Location and Location does not apply to restaurants. Was the offering presented by Blanko, an eatery situated in the splendid environment of the Alphen Boutique Hotel on the rural outskirts of Constantia, comparable to its site I would still be drifting on an orgasmic cloud of culinary-induced ecstasy. This is, not the case.

First impressions of Blanko were of a stylish place that had made full use of the old Cape Dutch architecture for which Alphen is renowned. Gables and sloped roofs around a quaint werf, all looking like something out of the Dutch Colonial Guide to Good Living. Inside the restaurant, the place was buzzing with well-coiffed and body-lotioned men and women seated in an area that had some suave, elegant pieces of art. No conceptual monstrosities, rather figures and pictures exuding modern colours, light and fun.

We sat al fresco, in-doors being sold-out, and after about 40 minutes a bubbly hostess asked if everything was in order. “A waiter would be nice?” I enquired, as until that time service had been as absent as a Helen Zille admission of wrongdoing. And before you could say “snappy”, a beaming waiter was upon us, smiling as if he had just received news of the successful processing of his work-permit.

The menu at Blanko is Italian, with meat and fish laced with local names and terminology, as well as the ubiquitous pasta and pizza.

I kicked off with the charcuterie platter, while Peggy Genis decided on tomato soup.

The charcuterie arrived showing deft presentation and skill from the kitchen, as the plastic supermarket meat containers had been simply – yet skilfully – upended to ensure the rows of salami, coppa and bresaola lay on the plate on neat, linear patterns. No bread was brought to accompany the cold meat, and I was not surprised: Alphen is Tim Noakes Valley, and the Professor actually visits the adjoining coffee shop, probably to celebrate his bi-monthly bowel-movement with a bacon-and-cheese omelette.

Across the table, Peggy was having a hard time with the tomato soup. Hacking away at the seemingly impenetrable surface, she eventually succeeded in prising open the soup’s first layer which resembled a samurai sword-induced flesh wound from a Quentin Taranti no flick.

The soup was little more than a pulverised can of tomatoes with a hit of chili added in an attempt to perk things up. The constituency was dense enough for a Gupta-hairpiece to float on, and flavour-wise things tasted as though all three of the Indian brothers had done exactly that before the soup was served.

Onto the main-courses, and I headed – again – for the carne side of things. Veal escalopes it shall be, served with new baby potatoes and rounded off with a veal and lemon jus. Peggy, still sleeping stodgily after her encounter with the tomato soup, went for a pizza of the bianco verde-style.

Expecting for the real meal to start, I was drinking joyously on a bottle of Waterford Cabernet Sauvignon, feeling the onset of a real meat-lust.

The mains arrived, and things did not look good – even in the low light and dark environs from where one expected Lady Anne Barnard to pop-out of anytime now to ask for a glass of Vin de Constance and the services of a mulatto house-boy.

That pizza of Peggy’s looked as boring as bianco verde sounded, being dressed with fennel, green olive and mozzarella – no tomato. My veal lay listless and brown and small, an oily, fatty pool of jus spreading from the flesh. There were a few halves of new baby potatoes and some herbs lying about.

Another glug of wine, and I was ready to attack the meat. Upon my first stab, I prided myself on the valour of my decision as this was the kind of meat that normally attacks you first.

As many student girls said in my day, I don’t know why I put that into my mouth. But it was paid-for food, ordered and plated, and this was Blanko, so I did just that.

The experience of having this meat in my mouth left me marvelling as I massaged the strain in my aching knife-holding right hand. For I just had no idea of what to do with what I was trying to eat.

The veal just lay there in the mouth like a purposeless object, not knowing why – of all that could be done with an overcooked, flavourless piece of tough cow meat – someone had chosen to serve it to a hapless eater-outer.

Once the squeeze of lemon had disappeared, there was no flavour, just a leathery wad sitting between tongue and mouth-roof. I tried to figure out the date of my last dental procedure and slide the thing to the chew-side. The theory of one’s jaw-muscles being the strongest in the body had me doubting my overall bodily strength. Not even the most ferocious bite, the hardest chomp could make a dent on that thing I was trying to eat. 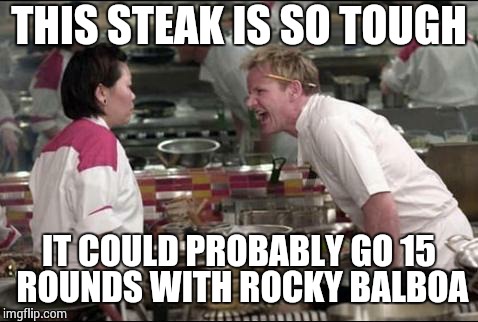 Fortunately Peggy and I have been around, so I had no qualms of taking the meat from my mouth and cutting it into smaller pieces. These I slipped back in, tried to bite again – unsuccessfully – yet swallowed, just for the hell of it.

The strain of this venture made me grab a piece of pizza without asking, supposing that my efforts were deserved of reward.

What could go wrong with a pizza I thought, before Jesus wept.

The thing was half-cooked, bland feral raw dough giving away under your teeth with the texture resembling the body of dead, still-warm bony lizard. There was no flavour in the pizza to speak of, nothing to redeem the damage done by the tough dead animal I had tried to eat earlier.

But what a view.

21 thoughts on “The Worst Italian Restaurant in South Africa”