Despite being opinion-shy, I had been waiting for an opportunity to weigh in on the Cecil John Rhodes statue debate. This did arise in the form of a phone call from a former University of Cape Town student whose wine society once bummed wine from me for a “tasting”, as students tend to do.

In any event, said former student is now a business consultant in Port Elizabeth. And remembering my days as consultant to Boschendal, he asked me if the brand was considering pulling its range of Cecil John Reserve wines from the popular portfolio. 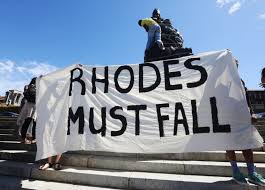 “We all know the statue on campus should, like, go,” he said in that cocky manner implying my assumed agreement with him, “so it only makes sense for Boschendal to drop the Cecil John wine range honouring a racist empire builder.”

After asking the correspondent if he did not have facial hair to manicure or tattoos needing further colouring, my thoughts ran to the ridiculousness of this debate currently taking up valuable airtime and bandwidth.

With so much to address in South Africa, the presence of a statue representing the not-inconsiderable historical legacy of a limp-wristed imperialist Pom with delusions of grandeur surely does not warrant the reams of newsprint and terra-bytes of on-line opining.

On the wines: well, Boschendal was once owned by Cecil Rhodes. His agricultural vision in the Boland was vast and pioneering. It is thus only fit to honour Rhodes with his own range of wines as – unlike what the lefties think – history is not erasable.

History consists of the good and the bad, and because it is a holistic part of the human condition we do not have the right to be selective on the parts we deem necessary of leaving out.

The UCT senate’s decision to remove the statue of Rhodes from its current position on campus is not as surprising as the bunch of middle-aged white lefties – including academics and journalists – who support this move.

For instead of raising the issue at the advent of South African democracy 25 years ago, our learned friends wait for a 30-year old serial-flunking male student to throw a bag of excrement on the Rhodes statue. Now, suddenly, their collective moral backbone stiffens and the country is called to notice the presence of a colonising home-boy on the university’s grounds.

Honestly Dr Max Price, vice-chancellor, if all that one has to do to get decisions taken at UCT is to toss a turd around, why sit through all those meetings and strategy sessions? Next we’ll have some anti-Banter park a high-carb drol outside Tim Noakes’s office and you’ll run him out of town as well.

Of course, the hordes of middle-class white folk clamouring for the trashing of Rhodes are purely in it because they feel left out from the rebelliousness their black countrymen feel they have a right to.

Thirty years ago, this gang of white journalists and academics was able to express its liberal leanings by rebelling against the apartheid government – despite being middle-class beneficiaries of apartheid education and other social perks.

Now, mission-less, they are lost. Disenfranchised, the lily liberal is aghast at his or her impotency in countering the ANC government with their incisive, piercing arguments. How can the voices and writings of such smart people not have an effect on a crony government run by a morally-bankrupt man who does not even have a matric? Why can the intelligentsia rock the cradles of government in so-called Western countries, yet in South Africa their cultivated opinions do not matter a Nguni’s scrotum?

In lieu of influence, they grasp onto something as shallow as calling for a statue to go. A piece of worthy and irreversible Cape history. And I am not going to even begin by asking which baggage-laden relics are next….

Having affected the removal of Rhodes by the spineless UCT senate, these ivory tower lefties are no better than the Isis freaks who attacked the monuments in Iraq with sledgehammers.

Or so history will tell.

How blessed to not to have to delve into this kind of argument on a daily basis. With a glass of Cecil John Reserve Shiraz 2008 in the hand, we move on to worthier topics of debate.

4 thoughts on “No Middle of the Rhodes in this Debate”