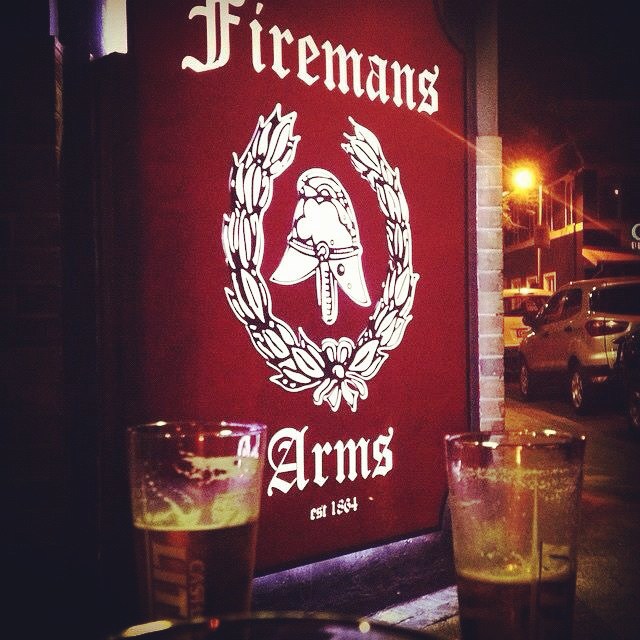 A pub lunch can be a thing of true beauty. Simple, tasty and sustenance-giving, pub food is undoubtedly Britain’s finest contribution to international cuisine. Bangers and mash. Fish and chips. Hearty pies. Liver and onions. Steak and egg. Syrupy, spongy puddings. All served quickly without fuss or show just as you suck the froth from the second pint of keg beer.

Food, this, to be eaten quickly between conversation in a cosy, spirited environment where one is seated alongside like-minded diners who don’t want foams and drizzles or minutely-plated parcels of something as unpronounceable as it is invisible.

Despite its history as a British colony, Cape Town is pretty low when it comes to offering a good pub experience. Chains such as Slug and Lettuce, Keg and Whatever and The Dros don’t count. These are boring cut-and-paste establishments with less soul than a Boris Johnson tell-tale neighbour and with about as much personality as a rusted beer spout.

The Firemans Arms in Buitengracht is not only one of the Mother City’s few remaining independent pubs, but arguably one of international stature when it comes to the cuisine it offers. A Cape institution since 1864, The Firemans has a loyal following of regulars who would literally protect their local pub’s honour with used dart-boards and who’d rather die than being seen in an Eat Out Top 20 establishment.

Of course, The Firemans has all the liquid refreshments one requires of a pub. The selection of draught beers is more extensive than the list of excuses offered for the poor showing of the Protea Cricket Team at the World Cup. There is a detailed wine-list, as well as the copious offering of tequilas and shooters required by establishments hoping to attract a young, hipster crowd and convert them to Pub Lovers for Life.

I popped into the Firemans Arms last week-end and it was, as is usually the case during a televised rugby match, busy and alive. Whether seated in the darkened traditional entrance on the Mechau Street side or the cavernous area next to the long bar out back, a television screen is on display allowing one to spot the sport should you choose not to socialise on a more intimate level.

The appetite was sharpened by a pint of fresh tank beer, specially delivered every few days from SAB headquarters in Newlands. Despite being in a wine mood on this cold Cape day, visiting a pub without ordering at least one beer is pretty much akin to going to a rock concert wearing ear-plugs.

Menu-wise, the Firemans Arms can justifiably be termed a “gastro pub”. Aforementioned traditional fare abounds, along with a startling selection of crispy, wood-fired pizzas adorned with every combination of toppings imaginable. Along with the pies, Eisbein and liver, one finds salt and Szechuan pepper calamari, lamb curry and an Italian aubergine dish. Soups include chickpea and bacon, and guilt-ridden diners can have a salad concocted to personal health-giving desires.

To start I went exotic with a chicken and jalapeno spring roll and some battered onion rings with a blue cheese dip. The spring roll was perfectly weighted: crunch on the pastry which instantaneously gave way to a luscious filling of shredded chicken perked by zingy peppers. The onion rings were hoops the size of the earrings donned by an African princess at her maiden bachelorette party, the puffed, crisp batter holding sweet, al dente coils of moist onion flesh. A creamy blue-cheese dip was a delightful partner to the onion as the dank, earthy notes of mouldy dairy – perked by a sour tang – brought a silky richness to the battered vegetable.

Before main-course, a bottle of Diemersdal Unwooded Chardonnay 2019 was ordered. The limey zing and exciting acids in the wine cooled down the reverberations caused by the fiery jalapeno chicken, cleansing the palate and preparing the stomach for the meal to come. A splendid wine.

The Firemans Pie is the stuff of legends, the dish only being approached by the pub’s loyal clientele who have had a brush with its volcanic intensity – often after copping a dare or losing a bet. The pie appears as a bowl covered with an innocent-looking blanket of perfect pale gold pastry. Next to it lie the traditional pub-grub stables of real golden chips, prepared on-premise, as well as a bowl of peas glamourously topped with a small warm tomato. The pastry is torn open with a spoon and inside lurks the soul of the pie, the belly of the dragon. Which is a pool of red-brown gravy the colour of Martian lakes with an aroma redolent of fire-seared animal flesh, the spiced body rub of a Zanzibar princess and that bitter-sour smell of roasted chilli peppers. 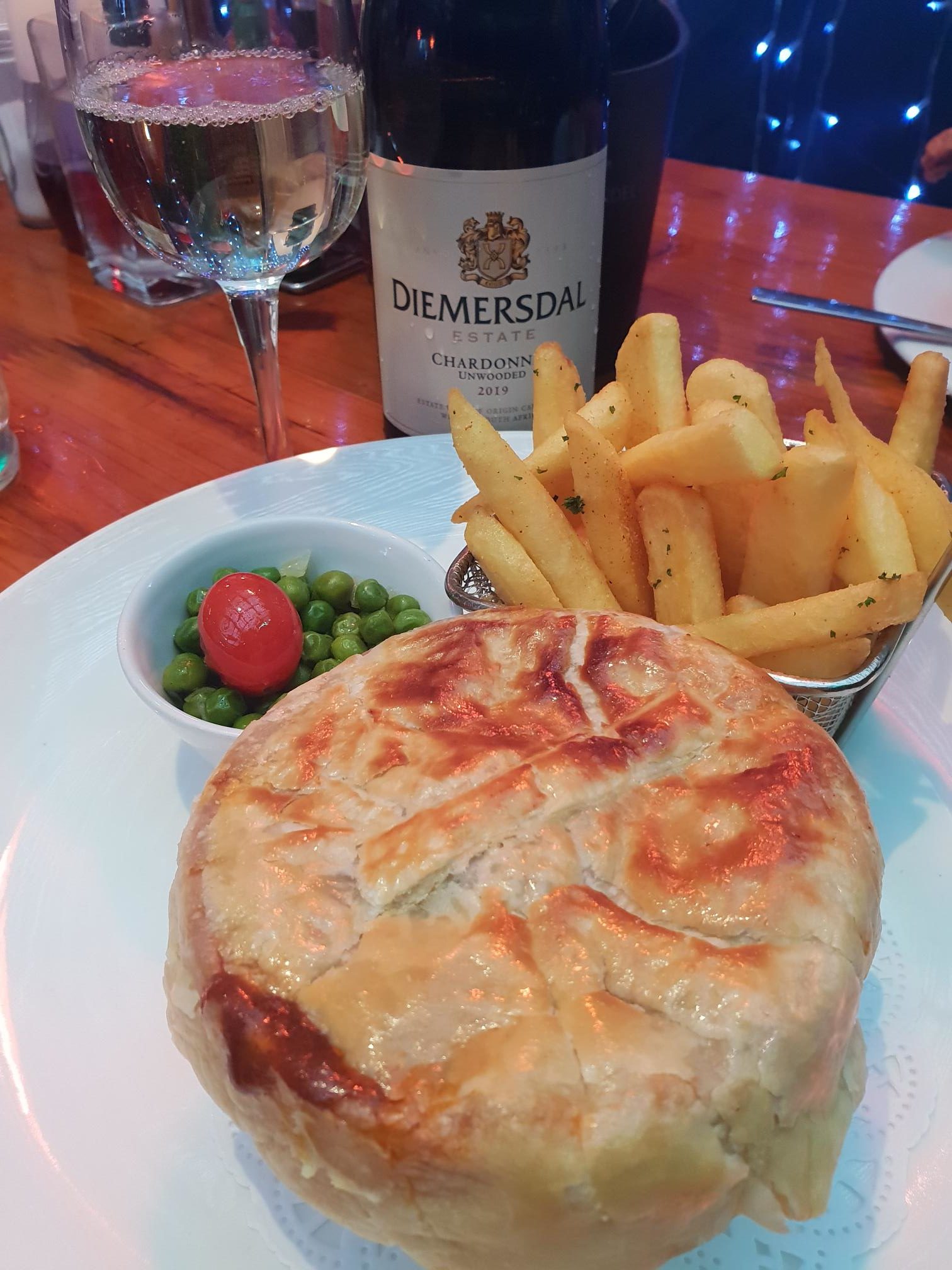 In the mouth, and the initial sensation is one of deceptive sweet-savouriness in the gravy accompanying the tantalising morsels of braised beef. The thing starts to warm up as those Cayenne peppers that have been liberally applied in preparing the pie, begin to take over. Starting off with a tingle, the next two mouthfuls of pie-filling elevate your mouth to new heights of roaring spicy burn. A few strips of pastry, warm and doughy and fresh, have no effect in calming the heat. The iced, golden-hued Diemersdal Chardonnay provides pleasant – yet temporary – relief as it prepares you for the next onslaught of Firemans Pie.

To this, you plunge with gusto. The sensation of mouth-searing beef, fresh wet wine and homely pastry is a blitzkrieg of flavour to the senses, delicious in a cruel, visceral way. In between the pie, long crisped potato chips slathered with gobs of sweet, gooey tomato sauce further the experience of taste and goodness.

Somewhere on the television a try is scored. You will convert, satisfied and sated. This is your place, and you are home.

5 thoughts on “Restaurant Talk: Baby You can Light my Firemans Arms”