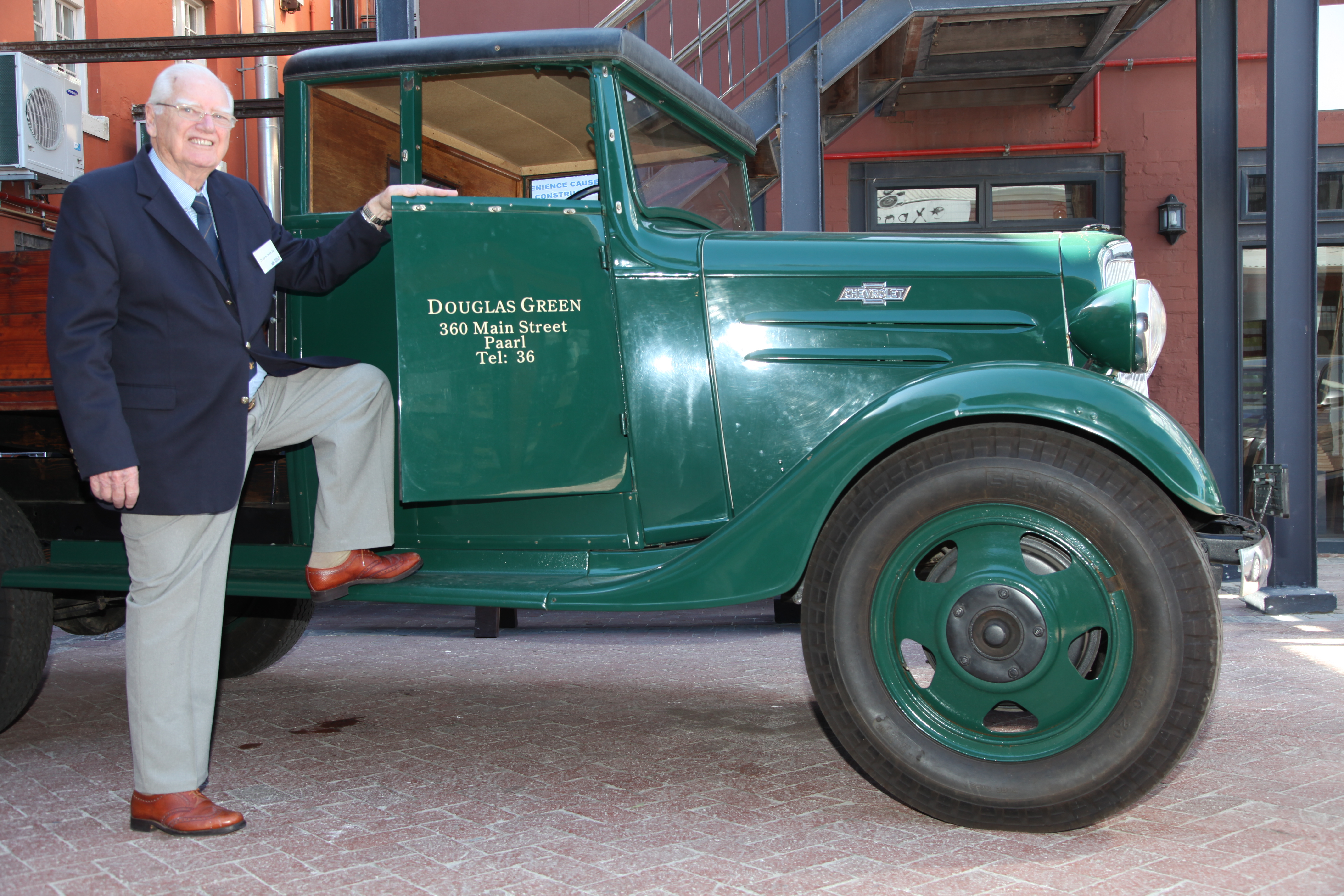 Anybody asking “where Douglas Green” will be pleased to know that he is alive and well, and living in a retirement village in Somerset West. Douglas Green Jnr, son of the man who in 1942 founded one of South Africa’s most famous wine brands, is himself one of the true living legends of the industry.

“I’ll always see it being an industry of relationships, good people, deals done with a hand-shake, that sort of thing,” says Mr Green sitting on the veranda of his home over-looking an expanse of well-kept gardens. He turns 90 in December this year, and has been around for most of the modern South African wine industry where he has seen it all.

“Things are tougher today than when I started out in the 1950s. There is a lot of competition and it’s harder for grape-growers and wine cellars to turn a profit. But I’m proud looking at the Douglas Green brand, seeing the range of really good wines and the young people promoting and marketing them. Although, it’s sometimes hard when the brand manager hauls me up the mountain for a video shoot before the sun’s up!”

Douglas Jnr grew-up in a house immersed in wine and the wine culture. “My father and his forebears were all involved with EK Green, also a wine company that started in 1842,” says Mr Green. “When the depression came along in 1929 the family shareholders decided to disband the company for economic reasons, going their separate ways.”

After dabbling in various other industries, including the tannery business, Mr Green’s father formed the Douglas Green company in Paarl in 1942.

“We were living in Newlands at the time and I was at school,” he recalls. “My father would spend a lot of time in Paarl as it was war-time and petrol was rationed. When we were together at home there would always be a decanter of sherry on the table. Myself and my sister were encouraged to have a glass and wine was a part of my life from an early age.”
Mr Green’s mother was from the famous Boland De Villiers family who owned the Paarl Wine and Brandy Company.

“I don’t think I ever considered doing anything outside of the wine and drinks business,” says Mr Green. “As a young boy I’d join my dad at the Douglas Green cellars and run about the barrels chasing rats and getting up to no good. But I liked the cellar smells, the talk of the workers, the sounds of rattling bottles. It stuck.”

Upon matriculating, young Douglas Green was sent to study winemaking and viticulture at Elsenburg Agriculture College in Stellenbosch, where Douglas senior had also studied.

“When my father was discharged from the navy after World War One he toured the winelands of France and Algeria to broaden his mind and see what was going on in Champagne and Bordeaux,” says Mr Green. Because of his father’s close workings with the KWV, Douglas Jnr was given the opportunity to take up and apprenticeship at this renowned and internationally acclaimed wine and spirits company.

Here Mr Green found himself being mentored by the legendary Charlie Niehaus, KWV’s wine and sherry supremo and today recognised as one of the industry’s true pioneers.

“He was a real legend, the man who conceptualised the Roodeberg wine as well as being the father of South African sherry,” says Mr Green. “Charlie sent me to work at the KWV cooperage and the distillery in Robertson, allowing me to get all-round experience for which I am still indebted to him.”

Mr Green recalls accompanying Charlie Niehaus when visiting the farmers throughout the Cape winelands who were growing the grapes and making the wine that would be sent to Paarl for blending under the KWV brands. 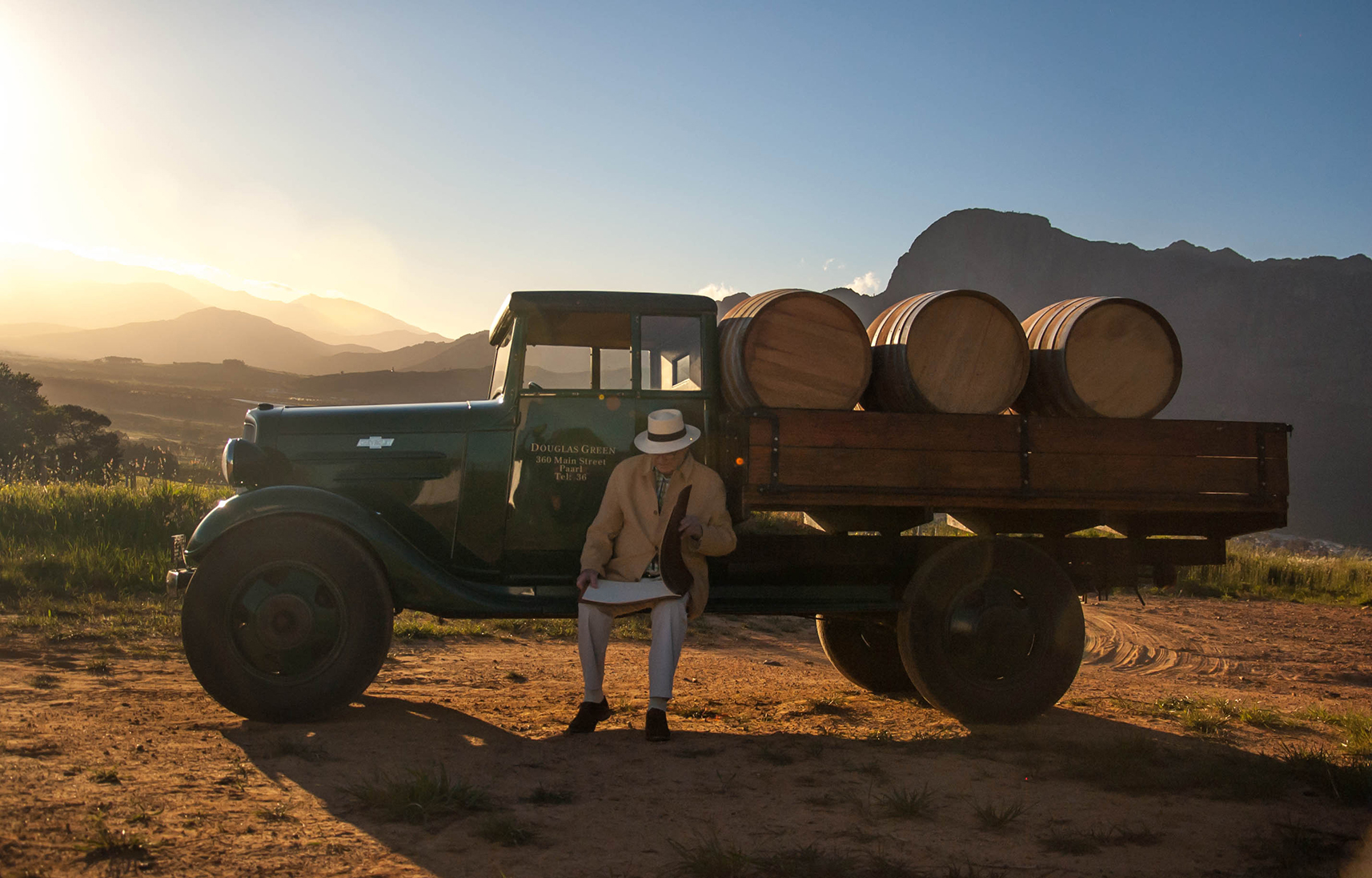 “You won’t believe how different winemaking was then in the early 1950s,” says Mr Green. “A white wine from Chenin Blanc – then known as Steen – Cape Riesling or Clairette Blanche, for example, would only be bottle-ripe (market ready) some 18 months after harvest. We did not have the cold-fermentation technology for making fresh, fruity young white wines – and the public did not want that style in any case. They preferred wines that tasted matured.”
With his apprenticeship over, the second Douglas Green thus joined the eponymous wine company in Paarl. “My father told me: ‘So, now you know how to make wine. Now you can learn how to sell it.’”

So after opening the doors to Douglas Green at 07:00 each day, the young Douglas would drive from Paarl to Cape Town visiting hotels, bottle-stores and restaurants to market and sell the wines bearing the name Douglas Green.

“Douglas Green bore my father’s name, but also represented what he wanted people to experience in the wines,” says Mr Green.

“He had close relationships with grape growers and winemakers around the Cape and once their wines were delivered to Douglas Green, he would blend them into various brands. Quality and consistency were his aims, wanting the wine-buyer to simply enjoy a bottle of Douglas Green so much that they’d buy another the next day. My father was not keen on meetings and office-talk – he liked to be among the barrels overseeing the bottles, on the bottling-line checking that everything was running smoothly, talking to the farmers in the vineyards.”

It was about quality above everything – and packaging. “We were always serious about packaging and brands.”

Besides Mr Green’s apprenticeship at the KWV, there was a strong relationship between Douglas Green Wines and the KWV.

“The KWV was not allowed to distribute wines south of the Congo River,” recalls Mr Green, “but being the KWV they had an A-list and a B-list of Very Important Persons in South Africa needing wine and brandy. The A-list was from Prime Minister down, and the B-list from Chief of Police down. My father told the KWV he’d distribute to these eminent persons – if Douglas Green could get his own hands on some of their wine.”

Thus, Douglas Green’s famous St Augustine red wine was for decades nothing else but in fact KWV Roodeberg. One and the same. Other wines included another popular red Vallais Rouge as well as dry and sweet sherries.

Wine not sold in Paarl was trucked to Cape Town. “Which was not always easy as trucks were hard to come by for renting, and for a long time I’d drive the consignment through in a Chrysler Airflow from which I had the seats removed.”

Every day it was through to take orders and make deliveries: Simons Town, Sea Point, Salt River, Bellville and District Six. And once a week up the Garden Route as far as Plettenberg Bay.

The young Douglas Green had many good friends in the wine industry, among them Arnold Graue who was destined to take-over ownership of Nederburg from his father Johann.
“Arnold was a brilliant winemaker and a good friend,” says Mr Green. “We would spend hours in his laboratory at Nederburg talking wine and experimenting.”
Arnold Graue, a keen pilot, tragically died in an air-crash in 1955 at Youngsfield in Cape Town.

Mr Green smiles fondly. “Arnold was doing an amazing thing with Nederburg white wines. He had this method of adding a slight sparkle, a light tingle to the wine before bottling, creating the popular Nederburg Hocheimer. I learnt the method from him and after Arnold’s death Douglas Green released the Nauheimer wine made to a similar style.”

In 1956 he married Ena van Aarde with whom he had three children. They were married for 61 years until her passing.

“We met in Paarl in 1955 during the first National Wine Festival held to celebrate the South African wine industry,” recalls Mr Green. “I was sitting in the Back Bar of the Central Hotel when somebody took me a bet that I could not get the festival-goers to dance in the Main Road of Paarl. I like a bet, so I left the bar and got hold of my friend the musician Nico Carstens and commandeered him to get a music band in the street outside the hotel. Well, they played, and yes, the people got dancing. In all the merriment one of the girls from Paarl I knew came to ask me what was happening, and alongside her was her friend, this blond bomb-shell from Malmesbury – Ena van Aarde. And that, as they say, was that.”

Besides working with his father at Douglas Green, Mr Green also worked with the legendary Anton Rupert, owner of Distillers Corporation as well as for Scotch whisky producer William Grant for which he oversaw distribution in Africa, Australia, New Zealand and the South Pacific.

But his soul remains in the wine industry.

“I’m very proud of what the Douglas Green brand has become,” he says. “Now being exported to 40 countries and all that. And I still enjoy my wine. Red wine, a nice blended red. I like that.”