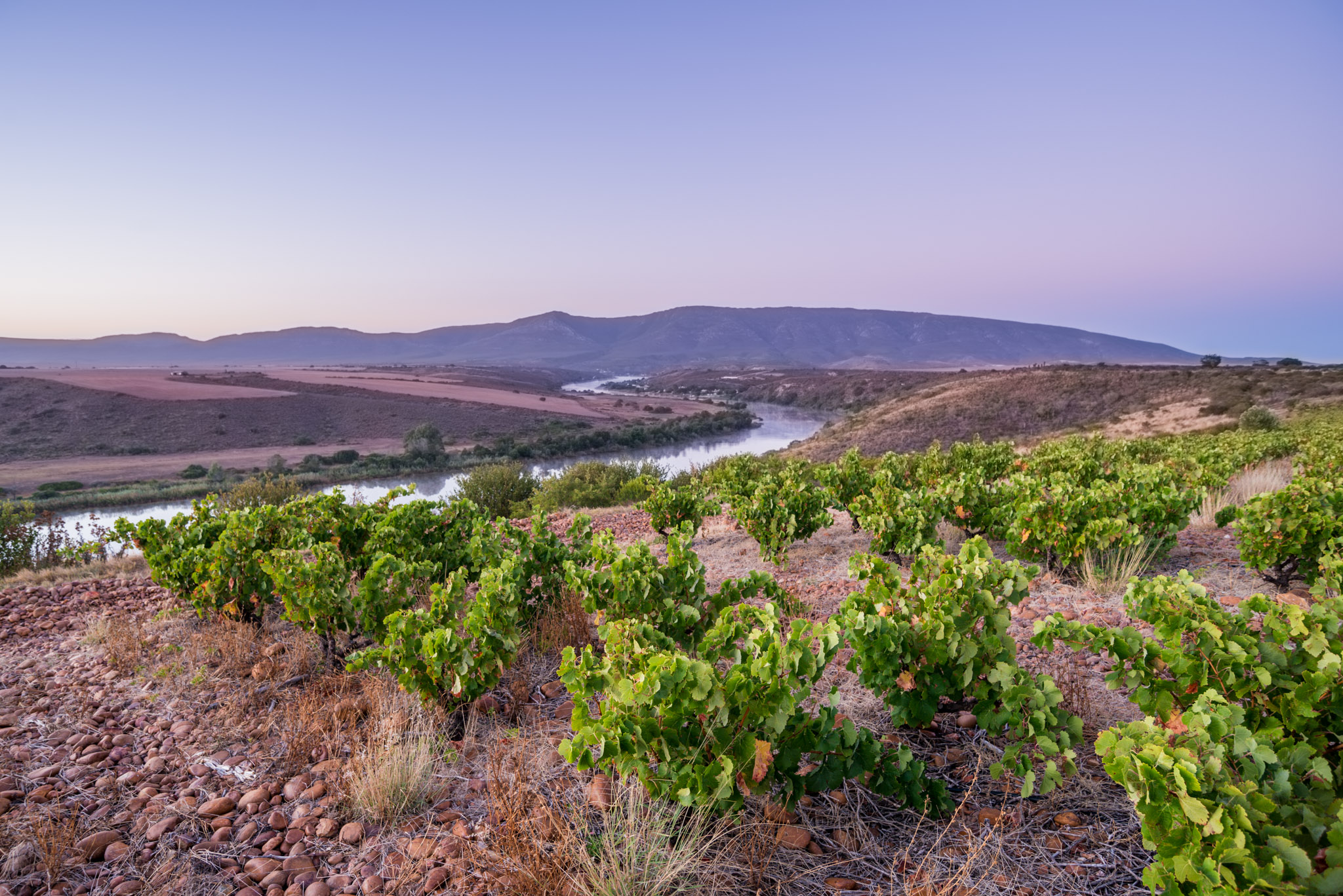 The Canadian dropped his 9 weight fly-fishing rod and pointed to the turquoise water. “So now, is this what you guys in South Africa call a wide river?”

Yes, I replied, in Dutch the word “Breede” does refer to a certain wide, broad object, natural or otherwise. (Think of your mother’s behind, for example.) And although the Breede River in the Southern Cape might not be quite as expansive and vast as the waterways of British Columbia, by South African standards this is a pretty wide river.

My fishing guest smiled, flicked his rod back and proceeded to cast out 30m of fly-line, which landed 10m short of the other bank.

The Breede is still a pretty nice river, though, providing the life-line of water to much of the Cape’s agriculture activities. Running 337km east from the Skurweberge near Ceres to where it spills into the Indian Ocean at Witsand and Cape Infanta, the Breede irrigates thousands of hectares of vines and fruit through much of the Western Cape’s farmland.

I don’t know whether David Trafford of De Trafford Wines in Stellenbosch subscribes to that captivating line “I am haunted by waters” from Norman Maclean’s classic novel A River Runs Through It. But Trafford’s obsession with the Malgas region some 15km from the mouth of the Breede River has led to a relatively young winery that is for me currently making some of the most riveting wines in South Africa. 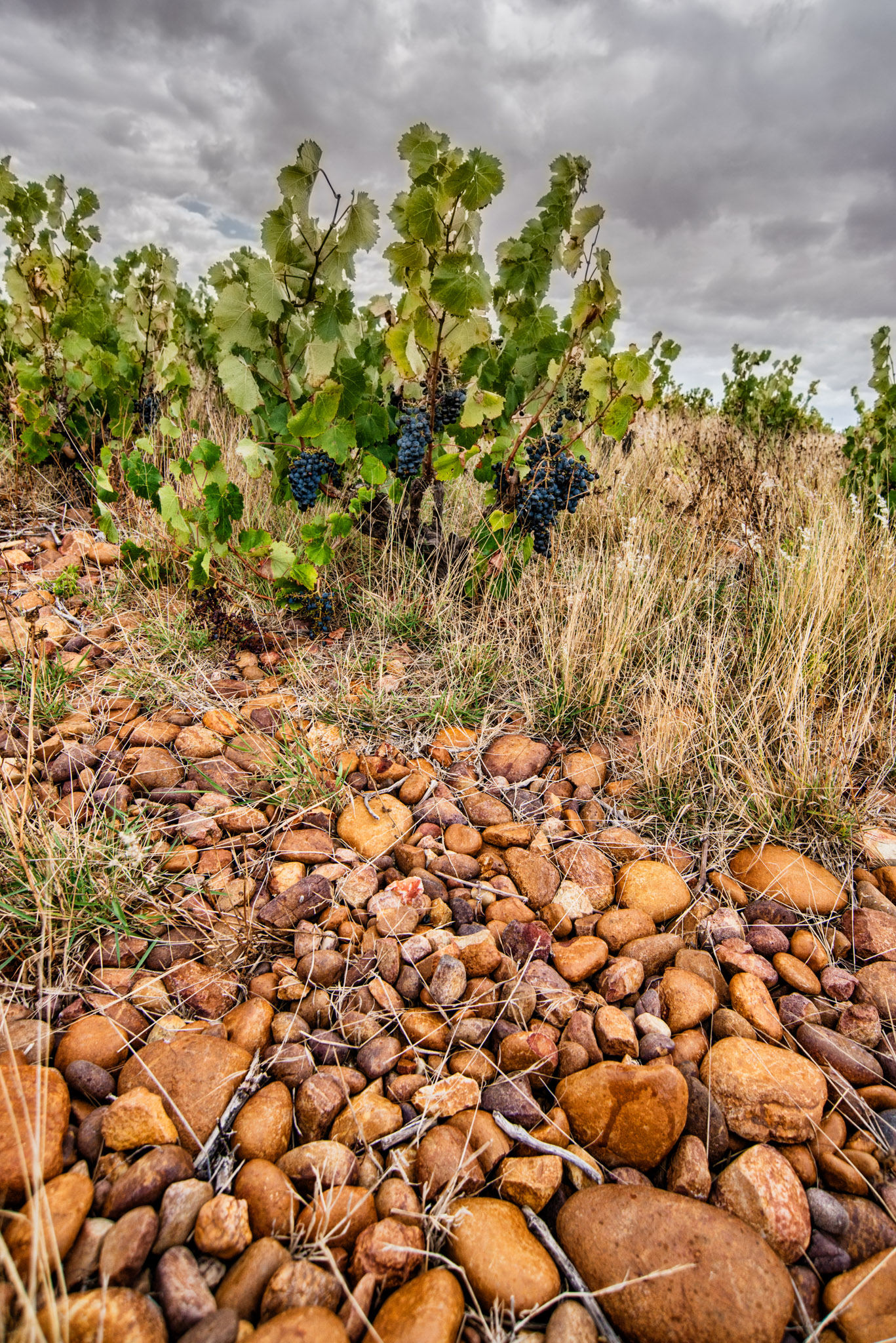 As visitors to this part of the Southern Cape know, the river cuts through wild country. It is rocky and the turf is rugged, and the plants are indigenous and wild, and when the afternoon cools and the southerly summer winds ease-off, the air smells like herbs and wet soil, and that aroma you find under the cap of a cold beer you’ve just opened.

Going where no wine-making man was gone before, in 2003 Trafford began planting vines suited to – hopefully – growing in the soils of coconut-sized alluvial rocks and the cooler Bokkeveld shale. He chose wisely: Chenin Blanc, Viognier and Roussanne on the white side, and on the red side Syrah, Touriga Naçional, Trincadeira, Mourvèdre and Cabernet Sauvignon.

The wines are called Sijnn, a Dutch-looking word but apparently the name used by the early Khoisan when referring to the Breede River. Hopefully between bouts of shooting big-mouthed Canadian settlers with poisoned arrows.

The bottled products, released since 2007, don’t make a big deal of the grape varieties used. It is about the name Sijnn. Rightfully accentuating the uniqueness of the region, it is about Malgas. And then it is red wine and it is white wine. 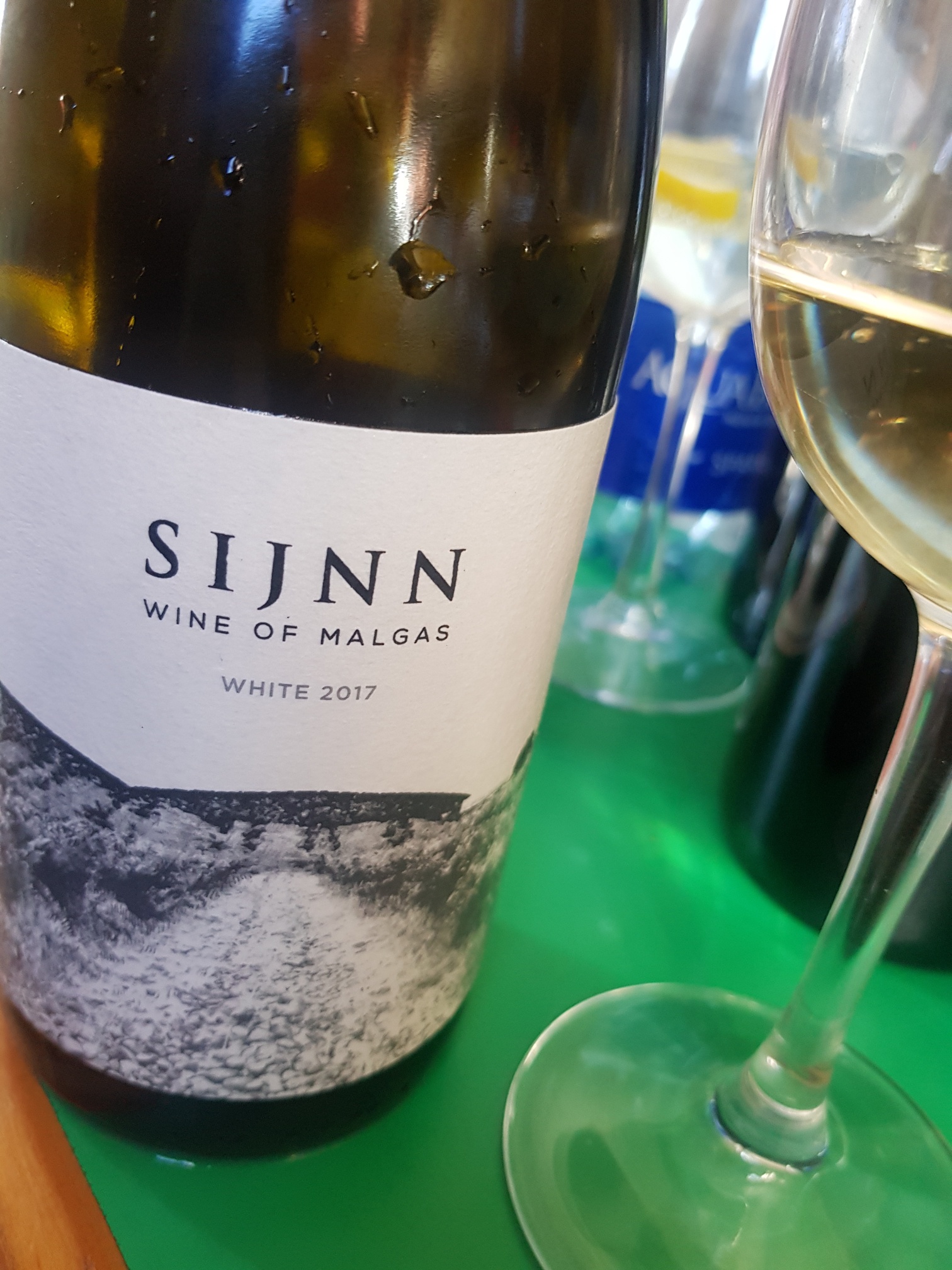 For the Sijnn White 2017 I chose the serene academic surrounds of Dias Tavern in Cape Town in which to analyse the wine in the company of Tsogo wine expert Miguel Chan. Palates well loosened with squid tentacles and cold Castle Lager, the wine was approached with the eager anticipation with which an angler creeps up onto a school of surface-feeding leervis.

The Sijnn White 2017 is drafted from Chenin Blanc (84%), Viognier (13%) and Roussanne (3%). The approach in the cellar by Trafford and his assistant Charla Haasbroek seems pretty intuitive. Despite the wines being classic in status, there appears to be a flexible attitude in there growing and making. As if the whole operation is always going to be a work-in-progress as new varieties are added to the plantings and the possibilities of the uncharted terroir uncovered.

For the Sijnn White, some batches were whole-bunch pressed. Fermentation in barrel was spontaneous and maturation done for 10 months. French oak, 11% new.

The wine is driven by the features of extreme Chenin Blanc you find from unforgiving geography. Dry, poor soils and pummelling winds in summer and winter keeps yields down to three tons a hectare, even on vines scarcely a decade old. On the nose the fruit is loud and brash, loads of honey-comb, potpourri and torn dried fynbos. You rise to it, want to dive in.

When you do, the attack on the palate is as keen and cocksure as an ace RAF pilot moving to bomb a platoon of disorderly Italian soldiers after their lunch-break. Everything one wants from a white wine appears to be present, and then some. I’ve got a cool, herbaceous breeze, possibly driven by the Roussanne. The Chenin Blanc is joyously pure, loads of crisp just-ripe stone fruit, dew-damp green plums meeting some crunchy Packham pear, with the wine’s Viognier component adding that tell-tale slice of apricot. All coming together in a harmonious partnership of assertive acidity and fruit expression. 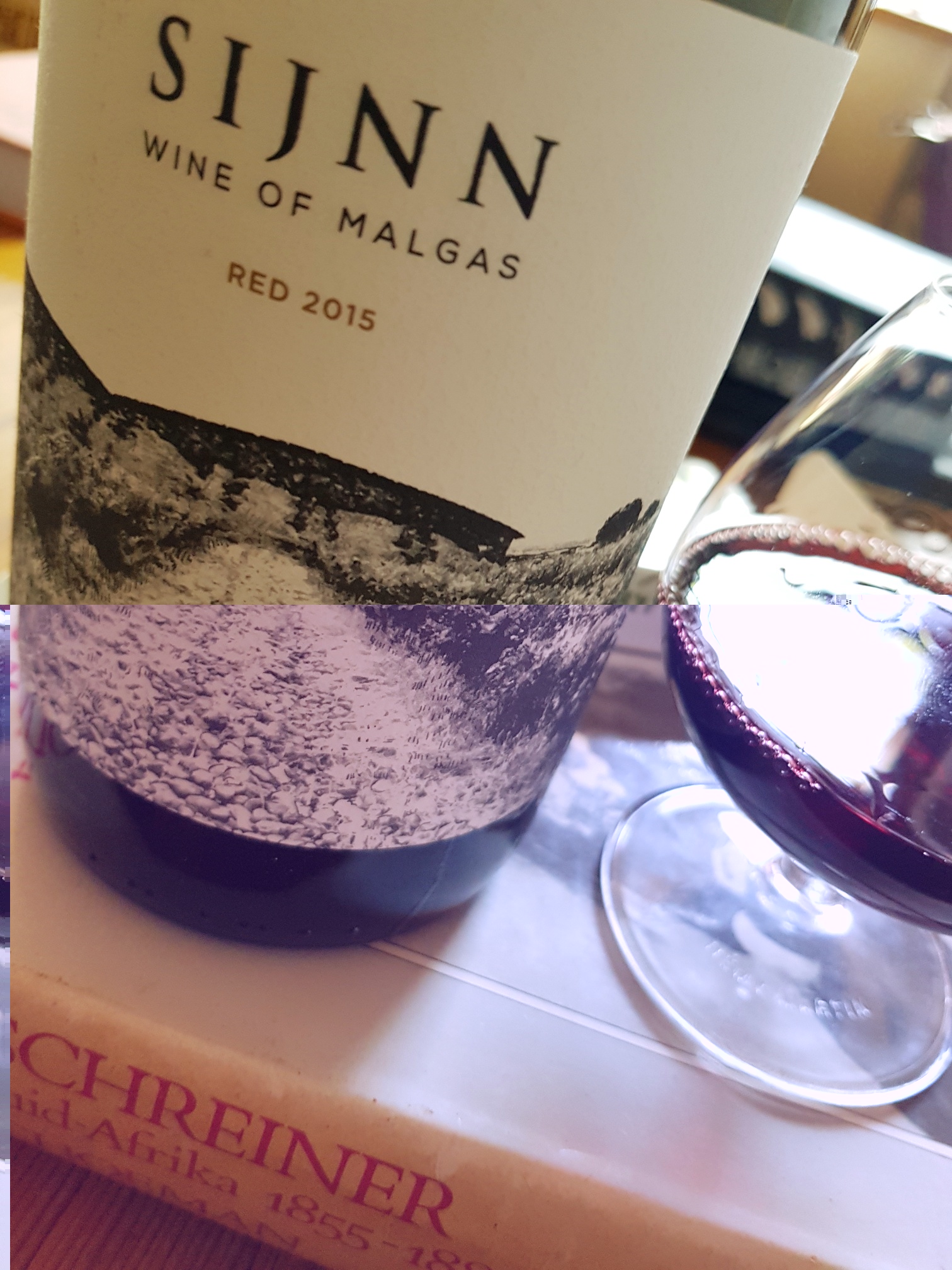 The Sijnn Red 2015 deserves being talked about in hushed tones. For really, this is a wine destined for greatness.

I don’t know if all the hormone-depleting excitement about the Cape’s 2015 vintage is quite relevant to the conversation. Would that wild patch of turf outside Malgas, within striking distance of the ocean, really have fallen under the same spells the wine gods deployed to seduce the Cape’s traditional wine-growing areas? Count me out on falling for this one.

But toss me sideways, what a wine.

Sijnn Red 2015 comes in at Syrah (47%), Touriga Naçional (19%), Trincadeira (19%) and equal quantities of Mourvèdre and Cabernet Sauvignon to finish of the masterpiece.

I was again almost irritated by the brash confidence of this wine. For fuck’s sake, the vines are only ten and eleven years old, it is the eighth time this wine has been made, and already it commands the presence of a South African masterpiece.

Oh, just get a whiff of that assured whack of savoury and brooding fruit on the nose. And while you are at it, taste the layer-upon-layers of viscerally enchanting black fruit, all currants and berries. Not to forget the loads of violets for which a Rhône Ranger would give his best ivory nose-hair plucker. Then the meaty, sap-laden dollops of taste that really does remind of an old, full Burgundy from out Gevrey-Chambertin way.

And I live by the river.