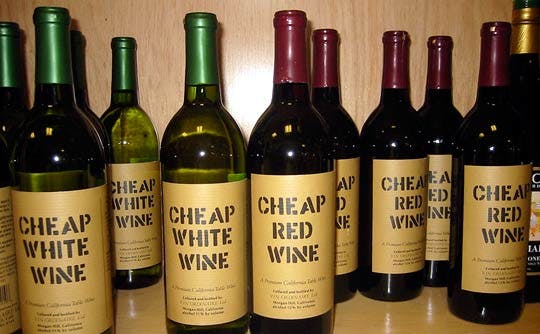 While contributing towards economic realities, this collective wailing about South African wine being too cheap is a one-sided affair. For in this call for higher prices, fair remuneration and a premium image, those calling for a pricier proposition are not including the interests of the most important part of the wine industry, namely the customer.

Those arguing for higher wine prices are hardly exposed to the realities the average wine buyer faces. But if you are that somebody for whom wine buying and drinking is a part of everyday life, chances are your support for a 20% to 30% price increase is going be less keen than the Vinpro representatives, industry bodies or wine writers lamenting the range of lowly priced on-shelf product.

The situation is pretty much akin to a community of fine-dining freebie reviewers and marketing bodies for haute cuisine restaurateurs calling for Steers to raise its burger prices for the greater good of the food industry.
Real wine drinkers need affordable wine. And the industry needs real wine drinkers.

I am sure that many of those housewives and students opting for R31.95 bottles of Chenin Blanc would also love a shot at a R260 jar of old vine, murky Grenache Blanc from the Swartland. But although the writers, judges, personalities and influencers spend 98% of their time breathlessly commenting on exclusive gems and lamenting the fact that these beauties are (a) not consumed en masse and (b) still too cheap, these insights mean nothing to the majority of the country’s wine consumers.

Hard as it may be for the intelligentsia to accept, more than 85% of South African wine consumed is priced at below R55 a litre for the same reason that the majority of those buying bread prefer Sasko white or brown to wood-fired loaves baked from organic stone-ground flour and speckled with sun-dried tomatoes and olives. (Incidentally, this is also the reason why your specialised wine blog has less hits than one focussing on lap-dogs with urinary problems.)

And in these realities of a buyers’ market, the interests of the producer stands second to the majority of customers’ spending power. Understanding this, the retailer plays along by promoting value-for-money which is nothing more than a euphemism for that word sending any snob running for cover, namely cheapness.

Take two average, non-opinionated middle-class consumers who enjoy wine as part of an everyday lifestyle. They don’t need to allocate scores to their nightly tipple, tweet about it or encourage arguments into ripeness levels and pyrazine expression. These are the majority of wine consumers of whose existence too many on the informed side of the industry tend to forget about.
So Alice and Jeff, or Ayanda and Sipho or whatever their names, split a R60 bottle of wine an evening at home. And at week-ends they eat-out, splurging R280 or so on a marked-up treat, plus another bottle on Sunday.

That’s an easy R2 400 plus on wine a month. Sure, small fry for the minority spending and living in the closed sector of the fine wine spectrum. But these everyday Joe’s and Wandi’s represent the majority of the industry’s customers who could easily be lost through steep price increases being seen as necessary or unaffordable, depending which side of the spectrum you are on.

Of course South Africa’s wines deserved of world-class status should be priced realistically. And the propping-up of prices through the dumping of wines that are tagged at less than what it costs to make them should be discouraged by the retailers and all those who have an influence.

But the existence of reasonably priced wines encouraging everyday drinking among a growing part of the population is at this stage more important to the sustainability of the local industry than the blue-chip, single-vineyard bottles deserving of luxury prices. These R30 to R55 bottles of wine are of irrefutable importance as they are what the majority of the consumers want to buy and buy because they like wine and are sustaining the South African wine business and culture by doing so.

Also, these wines can be put on the shelves at very good levels of quality and savvy producers can still make a flush profit in supplying them thanks to high-yield viticulture and machine-harvesting.

But comment and debate is not going to determine which way the call for increased wine prices is going to go. The final say will be had by the person with the cash in his or her pocket. Simple as that.