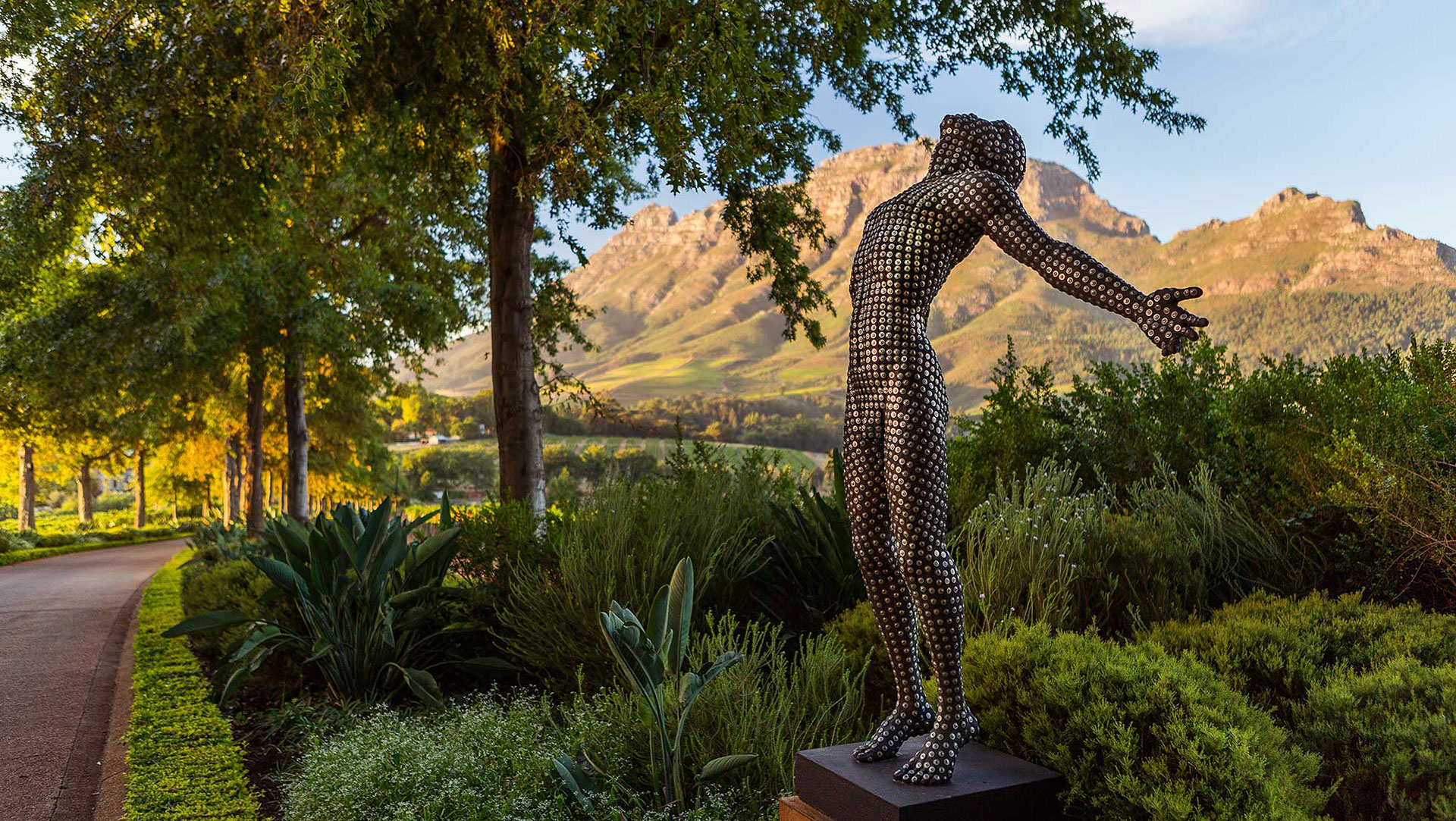 I had just began smelling the contents of the glasses before me, when the CEO himself took-over. The venue was Delaire Graff, that most magnificent wine estate at the top of Banghoek with views from where, on any kind of day, you can see forever. And Johann Laubser, responsible for running all aspects of this destination’s impressive array of culinary, vinous, hospitality, art and lifestyle offerings, just had to make time to discuss the factor responsible for Delaire Graff’s very existence: wine.

As he enthused while I sniffed and sipped whites and reds and rosé, Johann said something that stuck: “This winemaker of ours, Morné Vrey, he’s the kind of person we are just very lucky to have,” said Johann between swirls of Burgundian-styled Chardonnay. “All he thinks about, talks about and seems to live for, is wine. Delaire Graff has had the resources to create a premier wineland destination. But the commitment and dedication of a man like Morné in your winery is something money can’t buy.”

With origins in a family Stellenbosch wine farm himself and decades of experience in the industry, Johann’s words count for a bit of something. I vowed to return, but this time to Morné’s world.

This happens at the end of harvest, 2017. It might be during the final vestiges of the glorious season of grape-picking and crushing and working of the juice, but the Delaire Graff winery is on fire. With most of the grapes in, apart from a few bins of ink-black Petit Verdot, the important work is happening right now. The white wines are fermented and settling, and Morné and his team are going to have to start selecting the wines varying in region, terroir and style. Each component will be chosen and meticulously blended for bottling under the Delaire Graff label.

The reds are almost fermented, ready for an 18 to 20 month slumber in French oak, and every drop of what goes into those barrels must be just-so, to the cellar master’s exacting requirements.

Still a relative youngster, Morné has an air of discipline and directness about him. Since taking over the wine making helms at Delaire Graff in 2008, he’s forthright about what his job is.

“We are one of the top wine tourism destinations in South Africa and possibly the world,” says Morné, “and you’d be right in thinking no cost or effort has been spared on the holistic offering the estate presents. But when it comes to making the wine, there is only so much that can be bought and built to contribute towards the final portfolio. At the end of the day, it is simply about what the vineyards give us and how we as custodians manage the fruit in the winery.”

Morné the custodian has an uncompromising and assertive attitude in what he does, and leads the way from one tank to the other, knowing what he wants you to taste and why. We taste fresh Sauvignon Blancs from Darling, Stellenbosch and Durbanville and he’s onto why these grapes are selected. White fruit, tropical and briskness from Durbanville. Cut grass pyrazines from Darling. Texture and minerality from Stellenbosch.

As one of two new members selected this year to join the prestigious Cape Wine Maker’s Guild, he is as known for his tasting abilities as his wine making skills. 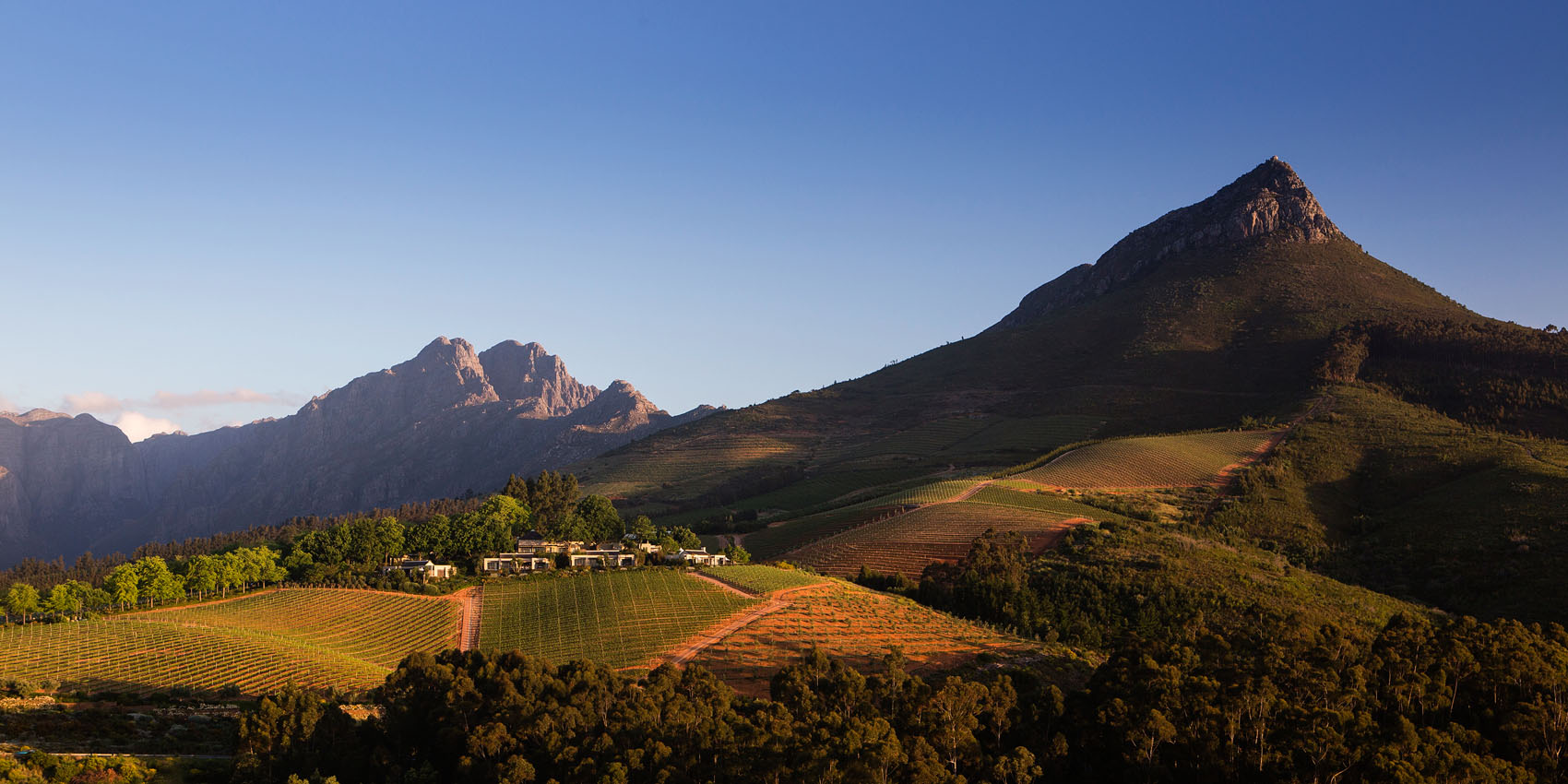 “I don’t have traditional background as a winemaker, not having gone the University of Stellenbosch or Elsenburg Agriculture College route,” he says. Morné is a product of Calitzdorp, the Klein Karoo town known as the Port capital of South Africa, and attended agricultural college in Wellington.

“It all really kicked in when I travelled Europe as a youngster,” he says. “Spent some time working in wine shops in the UK and managed to get a berth on the Oxford Wine Tasting Circle where Jancis Robinson makes the odd appearance. Here I got the chance to taste wines – including the great ones – from around the world. That was pretty much it – I’ve never wanted to do anything else since.”

Higgo Jacobs, Morne’s school-buddy from Calitzdorp who is now chairman of the South African Sommeliers Association, says Morné makes good wines because he loves to drink good wines, and he knows what they should taste like. “That may sound simple, but it’s actually fundamental. He’s always been incredibly practical and his wines show a commitment to precision that’s a reflection of his person.”

His practical wine making experience has included stints at the not too shabby Château Angelus in St Émilion, Bordeaux and back home in South Africa he worked at Hazendal Wine Estate.

Morné was part of the team called to rekindle the then Delaire Estate and to craft wines that matched the ambitions current owner Laurence Graff had of establishing a wine destination at the very pinnacle of what South Africa has to offer.

In less than a decade, one would have to argue that this has been done. For those for whom critical recognition matters, Delaire Graff wines have made their mark on the local and international trophy, stars, scores and accolade scene, underscored by reams of purple prose.

In his office I point to a poster announcing the Delaire Graff Botmaskop as the Best Red Blend and Best Wine at the Old Mutual Trophy event and he shrugs his shoulders while opening bottles of wine.

“It obviously helps,” he says, “in South Africa awards and ratings mean a lot, not only to the wine consumer but for us too – this kind of critical acclaim underscores our belief that we are on the right track at Delaire Graff.”

But it is all about the wine, and Morné pours a line-up, my focus wanting wines that are made from grapes grown on the elevated mountain vineyards of the Delaire Graff property itself.

The vineyards, predominantly Chardonnay and Bordeaux varieties with the focus on Cabernet Sauvignon, lie between 340m and 540m. Soil-wise, Delaire Graff has hardly any of the koffieklip that drives much of Stellenbosch terroir. Here the roots are gripped by granite, tukulu, oak-leaf and clay soils, with the high-lying vines are pretty much exposed to all the elements nature selects to throw at them during the annual 365 day cycle.

Respect for fruit of this quality sees Morné and his team applying a placid approach to the wine-making process. “On the reds it’s a question of two to three pump-overs a day, as its red-fruited elegance I strive for rather than an overworked black-fruit density,” he says.

The explanation is crystal clear and evident when we work our way through the Cabernet Sauvignon made from grapes grown on Delaire Graff. The 2014 Reserve lifts the senses with a delightful perfume and elegant succulence, without sacrificing any of the commanding power that makes Stellenbosch Cabernets so world-renowned.

As fine as this wine is, I never saw what was coming. Laurence Graff Reserve is touted as the estate’s flagship, and expecting a slight differentiation on the Cabernet Sauvignon Reserve I predicted a denser wooding regime, a tad more concentration of fruit and palate density.

But the wine from vintage 2013 – according to Morné still in its nappies – introduced itself as one of the finest Cabernet Sauvignons I have experienced from local soils. Five barrels of specially selected Cabernet Sauvignon are blended with miniscule amounts of other Bordeaux bits to create a wine that, for me, is a new benchmark for Stellenbosch reds.

The clarity and defined beauty of the Cabernet Sauvignon Reserve are still evident, but in the Laurence Graff these are complemented by a classic Bordeaux line of liquorice and pine-needle, giving the wine an enticing exotic lift, which is quite extraordinary to experience.

But then again, since when is anything at Delaire Graff ordinary?