The attention given to the South African wine industry by the imperialist media and the Western Cape Government proves that wine is a racist, Eurocentric product that has no place in the current narrative of South Africa.

“Wine, definitely, must fall,” says Lingani Mtshoepa, leader of the Abrasive Action Initiative (AAI) at the University of the Western Cape. “We must stand up against the tyranny of those propagating the colonialist misinformation that wine is a precious South African commodity, one with history, culture and legacy on its side.

“The media and the DA-led Western Cape have fallen victim to the inappropriate and insulting insistence by white-interests that wine and grapes and vineyards are an indelible part of our country’s landscape,” he says.

“Wine is a Western concept with no place in Africa. It can safely be assumed that all the negative reporting on President Jacob Zuma is from journalists who come from a profession where the liberal use of wine is encouraged and part of its daily culture. And this is not our culture.”

According to Mtshoepa, the origins of wine are distinctly un-African.

“First of all, the vines are imported from the former colonial powers of France and Portugal and Spain, all enemies of the liberated continent whose only contribution to the continent has been colonialism, slavery, chorizo and a few competent half-breed footballers,” he says.

If further proof of the fascist and divisive origins of Western grapes was required, he said, one just had to look at the “lilywhite” names Sauvignon Blanc, Chenin Blanc and Grenache Blanc.

“Secondly, wine is a victim of science, the most non-African of all concepts. They then use science- things to turn the juice into wine, and then put the wine into barrels made from foreign trees, like oak, growing in Europe. This makes wine the enemy of our people, having more Eurocentric imperial qualities than those skin-lightening creams from Germany and Belgian hair-straighteners. None of these have place in Africa. Wine…must…..fall.” 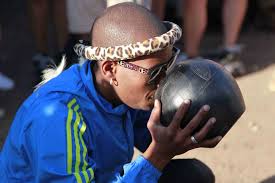 “This propaganda is shocking, and I pray for my fellow Africans who have been forced to sip from wine glasses filled with the imperialist elixir.

“Using their modest desire to attain a semblance of self-worth, my brothers and sisters are being brainwashed. They are led to believe that by drinking the racist liquid, joining The-Wine-of-the-Month Club and buying the Platter’s Wine Guide they too will be accepted into the society that has rejected them for so long.”

By reaching back to traditional drinks of maize beer fermented in calabash’s, society will align itself with the wishes of the forefathers and drink from the fountain of self-respect.

“Why sip this exclusive and divisive wine liquid when we can drink from the cups filled with beer and the spirits of the ancestors?” says Mtshoepa. “Our African beer, naturally fermented without the ravage of science, tastes as good as any Merlot or Chenin Blanc – especially once the dead-flies have been removed from the surface. And if it is image one is worried about, we can ask Riedel to make glass calabashes for us.”

Mtshoepa says AAI will be marching to every vineyard and wine farmer in South Africa, as well each retailer selling wine to formally petition the removal of wine from the face of South Africa and replacing it with maize, marog, beans and those things calabashes are made from.

“An injury to one is an injury to all!” he says enthusiastically. “Aluta continua, and if the calabash falls, it doesn’t even break.”

One thought on “Now Wine Must Fall”