Nestled in the heart of the Douro Valley, the village of Pinhão was being drenched by sheets of icy rain riding into northern Portugal on a brutal cold wind from west Spain. It was all grey and misty and chill, but not even the sight of a ugly horde of red-shirted EFF water-bottle throwers or the sound of a whining Donald Trump speech would have rendered the Douro anything but magnificently beautiful. It truly is God’s wine country, the vines clinging to the 40 degree slopes, all granite and schist reaching to the heavens and stopping at about 1000m above the river.

The day’s arctic conditions lent an air of added allure by making the climate ideal for drinking Port, right here at its only true ancestral home.

Bom Fim was the venue chosen. One of the quintas under the auspices of the Symington family – the largest land-owners in the Douro and proprietors of a number of the world’s greatest Port brands – Bom Fim has added an enchanting and atmospheric Port museum to its offering, as well as a tasting room bathed in natural light falling in through wide windows. All wood, white and airiness, it looks out on the valley to remind you of where you are, and why you came.

A couple of reasons for coming lay before me, namely some of the finest vintage Ports in history and all brands belonging to the Symingtons. Dow’s. Graham’s and Vesuvio. Various vintages, and a heady mix, too heady to recap in full so I will take two. 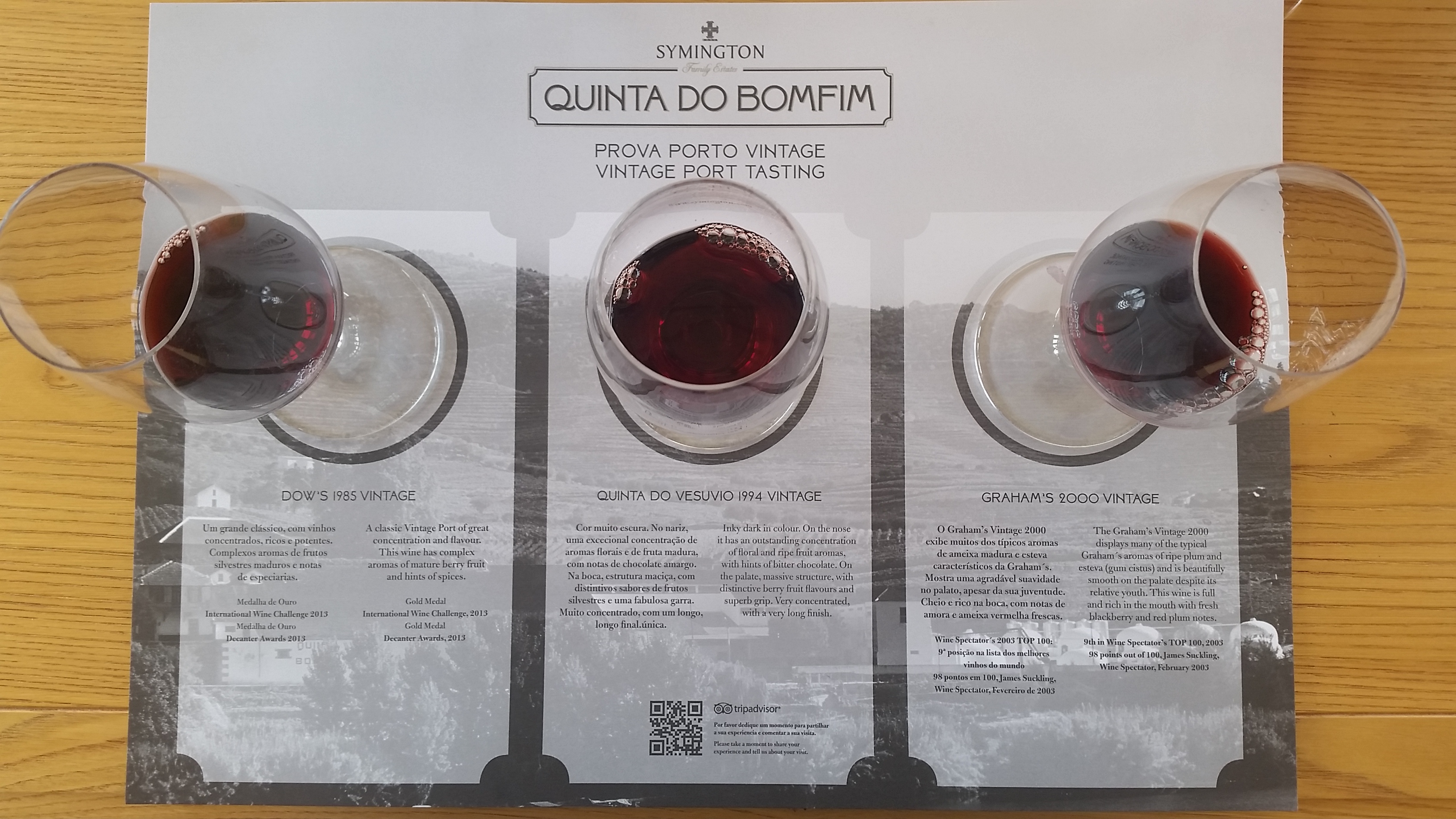 The Dow’s 1985 was used to kick-off proceedings by reminding one that outside of Madeira, no alcohol drink ages quite like a Vintage Port, simply the purest expression of a fortified wine.

After being stomped under human foot for 48 hours, the grapes’ fermentation is arrested by adding neutral spirit – one litre spirit to five litres wine. The sweet, sunny and expressive soul of the fruit is captured, fermenting no more but now given the opportunity to develop a symbiosis where grape character, terroir and spirit become one intoxicating unit.

In the glass a Dow’s, 31 years of age, inviting me to explore the magic tunnel which time had driven into the wine.

It was an old Port alright. A layer of slight oxidation lay on its purple-black surface, but a few swirls of the glass put freshness back in. Crushed raisins on the nose, with a mild hit of Cuban cigar rolled on the sweatless thighs of a non-virginal Latino. To the palate the wine introduced itself with delightful manners. Plenty of sweet charm, a polite confected flavour of caramelised prune and Algerian date-paste made for a warming welcome. The mid-palate led to a spicy fling – a Dow’s feature – and ground cardamom, white pepper and smoked Kalahari salt combined with the sweetness to form a crystal clear finish as clean as Nun’s habit on a holy good hair day. 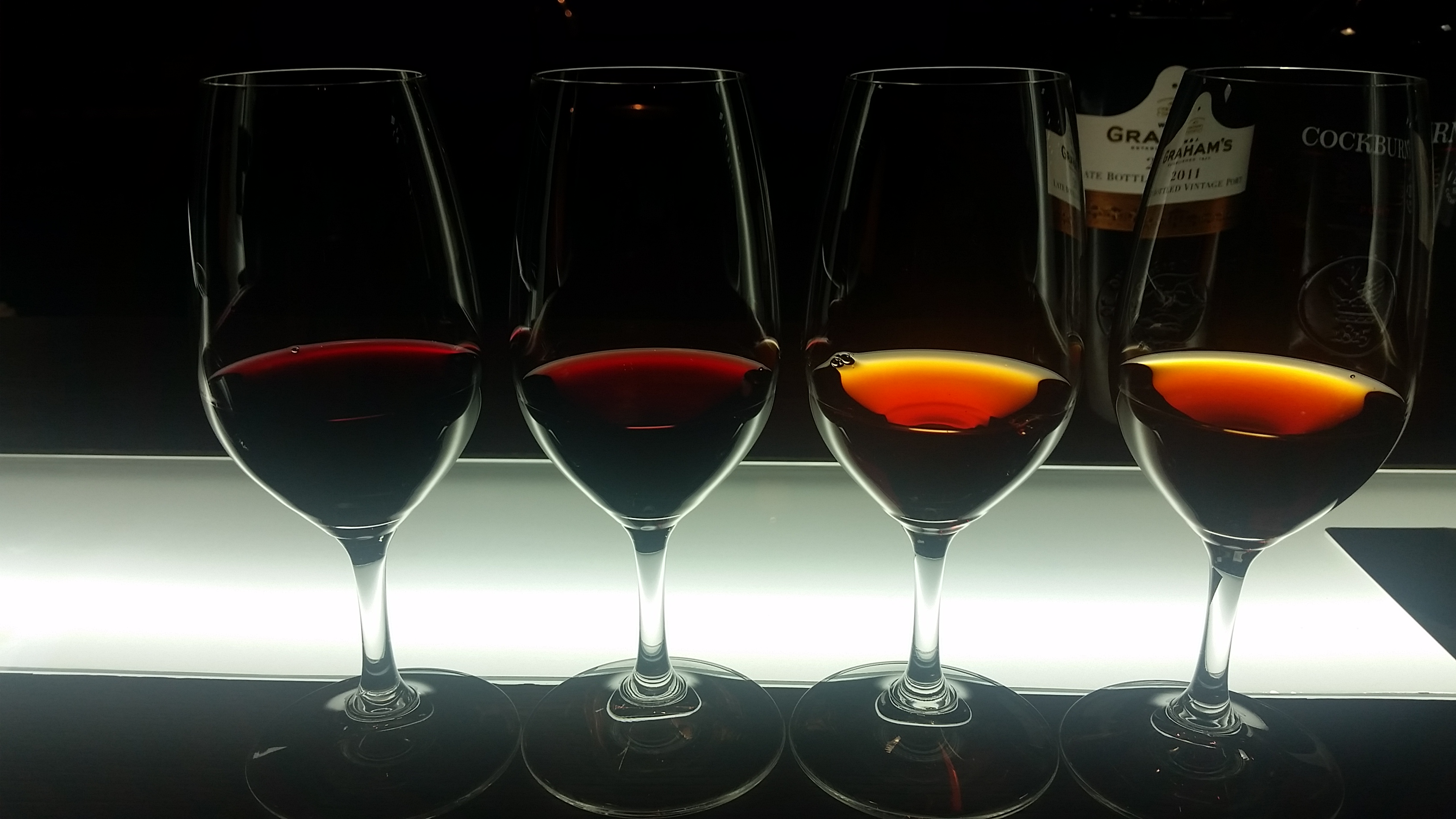 The best of all was the knowledge that this is Vintage Port at its peak: unlike Tawny, the style will not improve much more after four decades. It has had time to deal with its personal issues, has ironed out any weak spots and wrinkles and has obtained an air of mature confidence. A gorgeous wine making a memorable experience.

Quinta do Vesuvio is pretty much the Holy Grail when it comes to Port. The Quinta lies in the isolated Douro Superior region deeper east in the Valley, there where the yields are lower, the soil harder and tougher, the winters drier than the rest of the Valley. And Vesuvio comes with legends of a lady Port baroness dressed in black, the mysterious drowning in the Douro of her male friend and a wine unlike any other.

Rare, individual, evocative, Quinta do Vesuvio Port is only made in years when Vintage declarations are sent to Porto for approval, and I was holding an icon, the Vesuvio 1994.

Unlike the Dow’s, Vesuvio has another decade to hit its best, but even in its youth it has enough testosterone and power and aggression to make Hilary Clinton want to wear a girl-guide outfit.

The colour is black with a bruised purple, something Julius Malema’s dome must look like after being hit by a fiercely flung Helen Zille Birkenstock. On the nose there is hot tar with a pungent whack of honeyed elderberry. 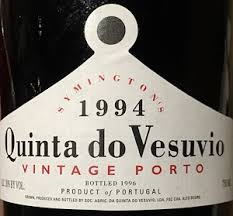 Vesuvio is known for its density on the palate, and sipping the 1994 felt like inhaling the silk slipper of a bewitched St Petersburg ballerina. First the wine coaxes the mouth with a sensual, unctuous coating of textured elixir before pounding it with haunting flavours. Black Moroccan hashish, burnt Turkish delight, scorched sweet fat from Iberian black pigs and over-baked figs make things heady, brooding, sensual. Drink-up, for I am seeing stars, cosmos and the black hole itself.

The words volcanic and eruption spring to mind, and I’d gladly allow myself to be embalmed by this lava from the Quinta do Vesuvio. It would taste good all the time, and I’d be safe from the rain forever.