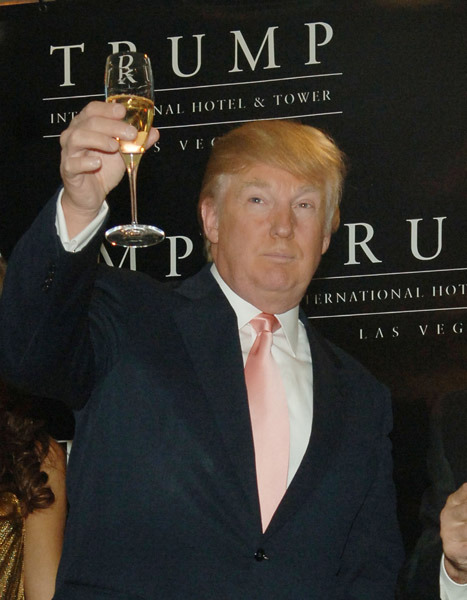 In this world exclusive, Lafras Huguenet from Wine Goggle talks to American Presidential Candidate Donald Trump about his foray in the world of wine.

Donald Trump: Surely the question is “when did wine become interested in me”?

DT: That’s more like it. Look, I like the good things in life, I’ve worked hard for it, and initially I just thought wine was this fancy French stuff you have to drink anytime you eat in a place charging more than 120 bucks a head. So when I began in business in the seventies I’d sip the odd Bordeaux or Burgundy so as to look the part at a lunch. Drink some Dom Perignon Champagne after a good business deal. That sort of thing. Then, well, wine began to like me so much that I began liking it, enjoying it, reading up on it….

DT: Yeah, bought me the Kluge Winery up in Virginia five years ago after the banks foreclosed on Patricia Kluge, poor woman couldn’t run a bagel shop in Brooklyn, no head for business. Good spread of vineyards, nice Sauvignon Blanc and Viognier. I like the place, although it’s pretty quiet with not many people to listen to you.

WG: Why little known Virginia and not California?

DT: Get out of town….real estate in Napa is more phoney than Hillary Clinton’s latest Botox treatment. I’m not dropping over a bar per hectare with so little margin in the return compared to real money stuff like condominiums, casinos and golf courses. I don’t put in a lot of money to make a little. I put in a little money to make a lot of money, and if I want to put in a lot of money I want to make money so much Bernie Sanders would have to see an orthodontist just to pronounce the number I’m gonna make.

DT: All Trump wines, the Champagne is better than any Champagne, the only reason the fancy-pancy wine critics don’t accept this is ’cause I got no blind monk to peddle my stuff. My Viognier beats hell out of that Rhône Ranger stuff from France, and the Sauvignon Blanc is killer. Can you believe people, real Americans, are buying Sauvignon Blanc from New Zealand? Isn’t that the place those big native guys in the black rugby jersey’s hang out doing some dumb dance before a game? Who wants to buy wine from people like that? But to each and all, I say, except only Democrats probably drink the stuff from that little place down south.

WG: When do you drink wine?

DT: Whenever I win, which makes me borderline alcoholic, you know. Just kidding, we Republicans have to be responsible consumers, especially seeing as we carry guns, and cleaning the Glock after a bottle of Merlot is about as risky as asking Jane Fonda and her Yoga Rugs to vote Trump. Talk about carpet burn….on the chin, if you get where I’m going.

But I like a Sauvignon Blanc from Virginia with some clam chowder and Cabernet Sauvignon is really good with a proper cheeseburger. But red wine is hell on the dental work – those stains do a great job of blotting out the tooth-caps.

WG: What will you be drinking if you win the Presidential Election?

DT: “If”, buddy, is a small town in Nepal. When I win, you mean. Look, I’m going to beat Hillary so easily and by such as wide margin that it is going to be embarrassing, so I’m not gonna to the expected and invite my friends around for a case of Romanée-Conti or a keg of Pétrus. That in-your-face-stuff is for losers. I think I’ll kick back, open a bottle of Trump Champagne and enjoy the moment with my family, some close Vietnam Vets, 20 Las Vegas lap-dancers and maybe throw in a Klan member or two. After all, do you guys not say variety is the spice of life? Well, variety is the Law of The Donald.