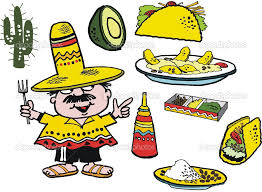 Besides mowing each other down over drug-deals, sending warning signs to prying journalists by slicing off their colleagues’ heads and smuggling countrymen across the American border, Mexicans have a passion for food. All those cocaine cartel wars, dismembering of limbs and people trafficking sure builds up an appetite, one sated by fun-to-eat foods: fleshy goodies wrapped in corn-flour tortillas or steamed corn-husks, chicken and turkey grilled with spicy chocolate sauce and plenty of beans, cheese and rice.

I got out of Mexico alive and remember it being a real cool place for food, all brightly coloured and perfectly spiced and served by lightly-perspiring waitresses smelling of day-old cheap tequila. Mounds of food washed down with iced bottles of Dos Equis while nervously eyeing two moustachioed hombres looking at my Press Card.

Like the Mexican people, their food also likes hot-footing it across the border although unlike Pedro, Fatima and the seven bambinos, the tamales and tacos are legal.

Cape Town has its share of Mexican places, although Wetbacks are scarce: it is much easier to run the gauntlet from Tijuana to San Diego than it is to swim from Cancun to Sea Point, although don’t bet against Guido trying.

If Guido did manage that swim, let’s hope he did not reach Camp’s Bay, home to the worst Mexican restaurant on the African continent, if not the entire universe.

Del Mar is situated on the first level of that increasingly grimy Camps Bay strip, yes the one smelling of three-day old California rolls, mouldy pubic hair wax, Jeyes fluid and coconut-scented sunscreen. Great view, but what a dump.

In any event, Del Mar is part of the Bukhara Curry House group, a fact that should have acted as a warning. Any place bringing India and Mexico together should come with a health-warning as well as complimentary bullet-proof vests.

The area is brown, darkish, yet breezy. An extensive menu promises authenticity: there is a list of “street food” munchy items, from the ubiquitous huevos rancheros and tortilla soup, to more exciting-sounding stuff like pork belly with chipotle and tamales with prawn.

Feeling fresh and fish-hungry, we went for the ceviche to start and I was immediately seeing sea-wet slices of squid lime juiced and chillied, as well as blood-red strips of tuna lightly seasoned with citrus.

Instead, three shot glasses arrived. Upon further enquiry the waiter enthused that this was not an amuse bouche of sorts, but – in fact – the ceviche. The fish was, well, lying somewhere with the liquid in the glasses.

These turned to include tuna immersed in sickly sweet coconut milk with non-existent chilli, salmon swimming in orange juice with ginger and calamari in the same candy-flavoured coconut milk. The morsels of seafood were the size of a Mexican eyelid, totally obliterated by the dollop of coconut milk or orange juice. It tasted like the stuff Beverly Hills residents make for their cats at Christmas time, but for those longing for the taste of ocean, Latino style, this was a no hoper.

Mains consisted of tacos and plain meat, fish or chicken dishes: chili con carne, calamari with garlic and chillies, pan-fried chicken breast with chipotle sauce. The tacos were offered with the usual fillings of fish, beef or chicken, with the promise of spice, chilli and authenticity.

Only one thing could get the repulsive taste of the fish milkshakes out of my mouth, and that was a piece of dead cow, so I went for the T-bone with cascabel adodo, a sauce supposedly of chilli, vinegar, salt and cumin.

The steak proved the chef was more Mexican than Indian: it was dry, tough and overcooked, although charging R195 provided for the Indian touch.

My teenaged dining companion had tacos with chicken and chillies. The tacos were small, soft and fresh, forming suitable wrappers for exceedingly bland and uninspiring chicken that needed another few orders of salsa to taste like something remotely edible and worthy of a paying for.

With the sticky fishy starters having provided enough sugar to make Tim Noakes pop an underfed knee-joint, we eschewed dessert feeling like two Mexicans that had just spent a fortune being smuggled to the slums of Los Angeles: tired, sad and ripped off.

But unlike them, I have the papers to prove it.