Having just returned from the christening ceremony of my Khoisan god-child, !Exmigarraki, I needed some civilisation. Not that the Khoisan do not have a civilisation of their own. But if you are not used to donning a leather loin-cloth, being smeared with the contents of a gemsbok gall-bladder and doing some humming and foot-stomping while inhaling the smoke of burning quiver tree leaves, it can all be a bit too native for my kind of comfort.

The feast of eland cooked on ashes inside a termite nest was, however, divine. Those Khoisan mammas can cook the smile off any giggling gourmet when it comes to dead animal. And this pleasing food was required as until the eland sirloin arrived, the shrieks !Exmigarraki omitted while being circumcised with a piece of camel thorn was not conducive to a good appetite. The godson sounded like one of those awful protesting Wits students, except the kid’s dick was bigger. 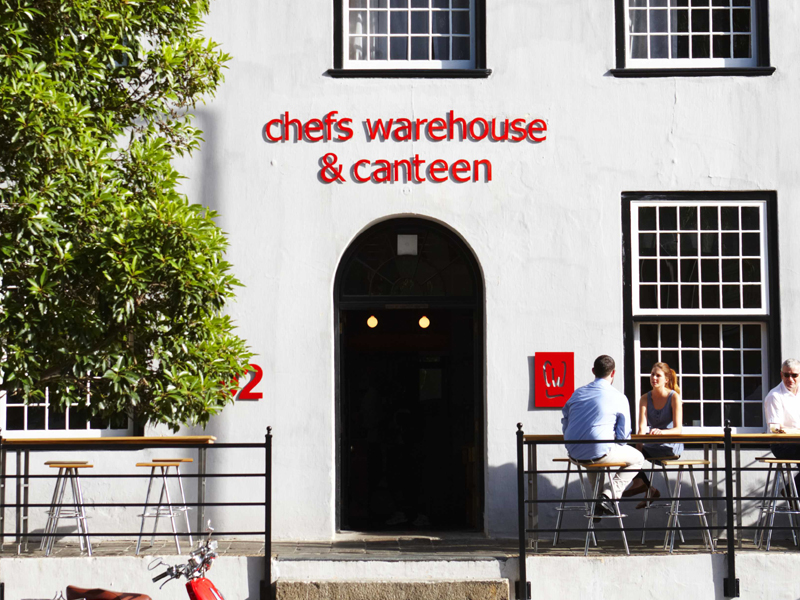 But today I was back in the city, the red sand having been washed from every orifice and every pore along with the rancid aroma of gemsbok gall. I had to do lunch of the kind that  had won the Western world, so thus hot-footed it to the Chefs Warehouse in the City Bowl, off Heritage Square.

Along came Sam Linsell, aka Drizzle and Dip, a sentimental move as her blood is also of Northern Cape origin so we could discuss anthropology, the Upington dining scene and the knife-work of that region’s best butcher, one Patrys van Niekerk.

Chefs Warehouse does not complicate things by clunking a menu the size of a flatbed bakkie in-front of you. It is tapas for two, and it just keeps coming.

First up was some fishy stuff: deep fried squid, as soft as a Khoisan nipple (I am told). Strips of uncooked salmon were fatty and unctuous, hiding the odd shitake mushroom. Then there was the ceviche. The ceviche.

Raw yellow-tail so fresh you could still feel the sea’s energy pulsating through its firm, wet and clean raw skin. Perfectly sliced – Chefs Warehouse boss Liam Tomlin knows his cutting and my next godson is being circumcised by him if at all possible. The ceviche’s taste was clean fish, virginal and unmolested by dashes of tart lemon juice or overpowering spices.

Next was a hock terrine. Firm, pure pig was anointed with bits of fat and covered in a tasty clear natural juice. It was do delicious I ate it on its own, forsaking the toasted bread and choosing to wolf down the terrine in its complete fatty, meaty sumptuousness.

Not even Linsell’s captivating narrative on the sterilising techniques for Ball Jars could take my attention from the pure grace of the food and the skill of the cooking.

Then came the meat. There were small thin steaks in a Bordelaise sauce, awfully prettily presented. The sauce was pure, lushly fleshed and perfectly seasoned. I can drink it by the pint. And then on half a bone came cubes of beef lying next to morsels of soft bone marrow, silky to the bite and oozing palate-cloying goodness.

To clean the eating cavity, if you should want, a beaut of a risotto with flavoured with sweet onion.

All this washed down with Vondeling’s Petit Blanc, currently one of my favourite gulping wine. Chenin Blanc is pushed in a floral, perky direction with Chardonnay and Viognier and a superb wine of the uncomplicated but delicious-drinking kind.

Home is where the stomach is, I suppose.