With whingeing at the authorities being a South African past-time, it is no surprise that all and sundry are croaking about the proposed changes to the country’s liquor legislation. I have not gone into the fine print, but from the outset the more salient aspects of this legislation seem only lucid and rational.

Raising the drinking age to 21? Well hell yes. As anyone who has attended events like the National Cheese Festival can attest to, teenagers just can’t hold their liquor. They puke after the first three beers, and with half a bottle of wine on top, pass-out on the nearest patch of sunny grass creating an unpleasant vibe for the more saner public elements. Stepping over those lifeless pimply bodies is also hell on the ham-strings.

This low level of tolerance has a lot to do with teenagers being susceptible to the glamourization of alcohol. By the time you have hit 21, a bit of bullshit-detection has kicked in and decisions are more likely to be made from the head instead of the childish heart. 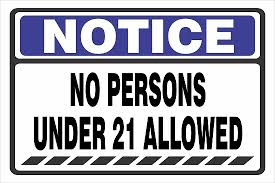 Liquor stores and pubs near schools? Ban them. With all the problems kids of school-going age face, no-one needs their constant exposure to lonely old perverts nursing flat draft beers and staring at the skirts on the school playground, nor walking to the bus-stop while being accosted by a bunch of tattooed hipsters downing lunch-time orange wine.

In the townships, shebeens bordering schools are also great places for gangs to lure youngsters into and strategically go about setting them up for a life of wanton crime.

Hard to argue about this one.

Liquor advertising, well here the agencies are to be blamed for Government’s eyes on the banning thereof. For example: all you need to succeed in life is a life-long addiction to Hansa beer. For according to the TV advertisement, copious potting of Hansa will in no time promote you from a boerewors-roll salesman to a multi-millionaire sunning it up in the Bahamas.

In any event, ban liquor advertising and the local wine industry will boom as a result of there being enough unpaid-for editorial opportunities for wine and its lifestyle to be promoted – something the beer and spirits non-cultures can hardly do.

Of course, if the South African liquor industry had done a decent job at self-regulation, society would not have the problem with alcohol it does and no intervention would be needed. But for all the aggrieved parties condemning proposed legislation, this is not the case.

One thought on “Liquor Legislation: Much Ado About Nothing”