Genuine heartfelt solidarity saw me queuing alongside a mixture of motley Cape Town folk for a chunk of chicken. The venue was a Cape Town branch of KFC, and the reason was to show some support for this ubiquitous purveyor of fast-food which had recently been castigated after a consumer activist posted pictures of KFC employees apparently hosing-down chunks of chicken lying on the floor of one of its outlets.

What, really, is the big deal here? Anyone who has spent time in an African kitchen will know that this kind of thing is par for the vuvuzela. Chicken falls on floor before it cooks. You wash it. Return to stove. Voila. The resulting deaths have been minimal and as far as I can recall, no wars were caused or hooded school-girls abducted.

I’ve worked in some European restaurant kitchens where Igor or Vassili would first beat a cockroach to death with the fallen chicken leg before wiping the member on his wife’s hairy armpit and returning it to the pot. 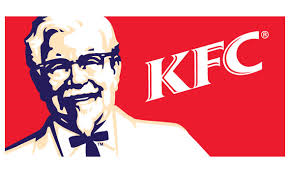 Bum rap for KFC, I say. So upon hitting the teller, I splashed out with a Big Seven and Chips, as well as a dish of coleslaw and mash. And hot-footed it back to Casa Joubert to analyse the wronged chicken chain’s spread in private and peace. With three Dachshunds, the peace was short-lived as they were shivering in their own drool even before I opened that package reeking the warm, fatty aroma of fried chicken.

It had been some time since I had done the KFC thing, but upon viewing the chicken pieces, I did not seem to recall them ever resembling mummified rodents that had been kept as pets by Egyptian princes. The seven pieces looked nothing like any part of a chicken’s anatomy as I have come to know it. These beige-yellow objects, by now oozing a layer of rancid grease, were far removed from the images of legs, wings, thighs or breasts, simple things centuries of evolution and chicken-eating has taught us to expect when confronted by cooked, eat-ready chicken.

I placed two of these KFC objects on a plate, prodding them with a fork to make sure they were dead, and spread some of the chips around the edges. A dollop of KFC mash with “the Colonel’s gravy” completed the scene of culinary solace or quiet desperation. I considered taking a photograph, but then again, some famous chef’s tend to visit this site and I do not want to be the one giving Rudi, Margot or Luke nightmares, resulting in split Hollandaise or overdone sole.

Having ensured the things calling themselves chicken-pieces were lifeless, I picked one up as KFC is made for manual eating despite the devastating effect it can have on a good manicure.

The first attempt to bite the food was met with determined resistance from a crust of fatty crunchiness, supposedly the Colonel’s secret recipe of herbs and spices used to coat the KFC chicken before deep-frying it. Texture wise, it was like biting into a toenail that had fallen off the blistered foot of a marathon runner in the Senior Category. The grease assisted in making the coating chewable without incurring critical dental damage, but it was what was lurking beneath the crust that appeared designed to attract focussed attention, as well as cause for concern.

The layer of crumbed spice gave way to something fleshy, but of mysterious origin. The fact that the meat was hot and apparently cooked temporarily alleviated concerns of contracting salmonella or Gabonese Mad Bat Fever. I stopped to look at this flesh, noticing it was somewhere between corpse grey and ghostly pale. With a disconcerting ribbon of menstrual red closer to the bone.

Eating this slippery grey flesh might have been a better proposition if you choose to munch it along with the firmer texture and perkier tastes of the crunchy coating. But approaching the meat on its own requires an act of valour for which KFC founder Colonel Saunders and his red-necked Kentucky hicks are not known. For were it not their ilk who hog-tied and butt-fucked the harmless sweaty fat guy in Deliverance?

The chicken flesh slides into the mouth without invitation, pretty much the way a horse worm slips into you nostril while you sleep next to a camp-fire. The meat is as bland as a ball of poached cotton-wool, the only flavour coming from the morgue-like grease still left behind by the layer of spices and herbs.

But you can’t really blame the chicken for not providing more taste: the animal probably spent its full 28 days of life in a cramped enclosure, wing-to-wing with a million other chooks sucking-up fishmeal, inhaling its own manure and warding off the sexual advances of a wild-eyed rooster called Whopper.

A miserable sod of bird-life, our KFC number was never going to make it high in the flavour stakes.

Two bites of my Seven Piece Special were ample, so I ventured to the mash and gravy for inner sustenance of the soul-food variety.

This is a helluva impressive pile of mashed potato on the eye. Whoever mashed it is the George C Patton of mashers and sure knew what they were doing. The consistency was yoghurt-like: smooth and milk-white, falling through a fork and requiring the services of a spoon. Ideal stuff with which to feed your trembling aged uncle as he sits on the porch of the frail-care centre staring into nothingness. 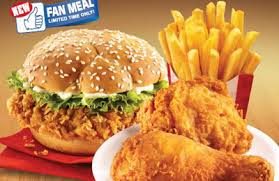 Taste-wise, there was indeed a flavour of potato, although a lot of other stuff had obviously been added to silk-ify the dish. All good, though. Until you hit the Colonel’s gravy.

Its colour is reassuringly brown and meaty. Texture-wise, it is lump-free and has a mellifluous sheen. The taste, however, is worrying in its artificial savouriness. Thoughts of braised bison mixed with plastic beer containers and the polyester suit of a dead MSG salesman from Shanghai spring to mind.

I cleared the table, and for once there were no dogs to feed having done a runner. Bloody chickens.

One thought on “The KFC Chronicles”