An invitation to lunch with an unacquainted lawyer is usually not an excitable prospect. But as long as there are no pending paternity issues or PC-fuelled lawsuits, there is scant reason to be afraid. Just make sure you meet the legal raptor in a place frequented by folk more likely to take your side in the event of verbal conflict or espetada-stick violence. And keep your wallet in sight.

Pierre Rabie is actually a member of the Cape Bar, making him an advocate. This means he is hired by law-firms to deploy his skills of negotiation, arguing and convincing to – as advocates do – either take someone down or protect a client from voracious predators who have issues.

But the reason for the lunch was not an ambush about past indiscretions or to slip me a summons from some dude for the salsa verde recipe I might be seen to have copied. Pierre is also a wine maker of the garagiste variety, whose Giant Periwinkle brand has built up a small, yet loyal following.

The wines are made from grapes growing in the Elim region, to which Pierre is fiercely committed being a son of the Southern Cape capital Bredasdorp. “I can relate to Elim. I’ve known that region all my life,” he says. “Tough agriculture country – sheep and wheat. Windy, cool, poor soils. The kind of conditions I associate with good fruit for wine making.”

The Giant Periwinkle brand has a Kelp Forest Syrah, a Blanc Fumé and now an Old Lady on the Corner Pinot Noir. The maiden Old Lady Pinot 2014 Noir will be out in June as our Learned Friend still has to get a label finalise. But the name does not refer to some tart touting business outside Overberg Liquors in Bredasdorp, rather to a more august and revered figure we shall learn of once the packaging is complete.

During our interlude I was only having eyes for the Pinot Noir, deciding to see how it would match with a delicate Dias Tavern peri-peri chicken. The bottle was chilled, something Pierre believes in when it comes to Pinot Noir, realising that “room temperature” is not the shelf next to a pizza oven in high-summer Wellington, but the draughty cavernous room of an old stone château in rural France.

For me, “Garagiste” and “Pinot Noir” are not two terms that have gone together well in the past. Besides Clive Torr’s Topaz, the garagiste Pinots I have had were all about as disjointed as a Helen Zille-Eusebius McKaiser twitter-spat. The heartbreak grape does not, seemingly, take kindly to amateurs.

But there is talent and a gruff passion in Pierre’s approach to wine making which could explain why this Old Lady on the Corner is, really, one of the most pleasant new label Pinot Noirs I have had for yonks. It could be in Pierre’s Jim Harrison-like understated strength in keeping things simple and sticking to a reverence for nature. He’s passionate about Elim’s physical characteristics. “Irrigation? We don’t have dams, but boreholes going deep through the tough soils, spurting the finest, sweetest water.”

The grapes were bought from the Strandveld winery. Yields four, five tons. Two weeks on the skins. Old wood. 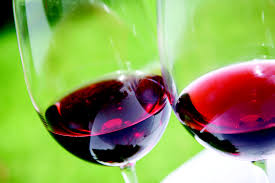 First thing that struck me was the wine’s uncluttered purity and focus, probably as Pierre’s description of the water was still ringing. The nose was sour cherry and sagebrush, with a snort of allspice.

On the palate the wine charmed with a cool, easy, laid-back length which painted all the right spots with curvy, graceful flavours, all as Pinot Noir as Pinot Noir can be. Porcini mushrooms left to dry in the sun. A layer of wet wild black-currents, picked late. Sour crab-apples. A crunchy, delicious spread of Portuguese green plum jelly. Something savoury… the mixture butcher extraordinaire Patrys van Niekerk uses on her gemsbok biltong.

Being in the presence of an intelligent legal-mind, I felt compelled to offer some comparison to Burgundy, noting the wine tended to resemble the fruit-driven austerity of Beaune rather than the richness of Nuits-Saint-Georges.

“No, this has nothing to do with Burgundy,” Pierre noted. “It might be Pinot Noir with all the French romance and history, but I am only interested in expressing Elim and South Africa. So this is South Africa, nothing else.”

With the jury still being out as to how good local Pinots actually are, the fact that there are a few true gems deserves a second hearing.