It is supposed to be a joyous annual occasion, but somehow I am always left with a thickness in the throat and a sense of loss. Once a year I head out to Kanonkop Estate to collect my annual wine allocation, a trip during which from the outset everything around me looks brighter and sharper, all appearing right with the world due to the knowledge that within an hour a few boxes of South Africa’s best red wine will be mine.

But upon leaving the farm, a chilly feeling of gloomy guilt descends. I look up at the Pinotage bush-vines perched on the clay koppie, turn left to the rows of Cabernet Sauvignon and suddenly feel like a carnivore who has just plucked a wriggling piglet from the teat of motherly sow. An umbilical cord woven from Kanonkop’s legacy, pedigree, terroir, personalities and excellence remains attached to every bottle of wine and removing it from the hallowed farm’s boundaries makes you feel like a Viking on the pillage, displacing another object of history.

But this too shall pass. 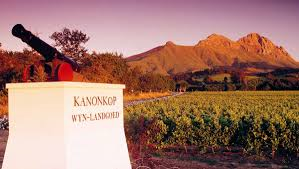 And before you know it you have pulled a few Kanonkop corks and are gullet-deep in marvelling at these truly magnificent wines, downing them by the sensual mouthful and calling proprietor Johann Krige to offer blabbing adjectives in garbled PR speak to ensure next year’s allocation remains unquestioned.

The latest stash of wanton pillage includes a Kanonkop Cabernet Sauvignon 2011, the Cabernet traditionally being the first wine I open to remind me that this is South Africa’s finest red variety. If I were going to take one South African wine to a High Noon Vinous Showdown of International Reds, Cabernet Sauvignon will be it. You want to see South African personality in a red wine, well, the power, muscular grace and assertiveness borne by a fine Cabernet Sauvignon is a finger-print of true expression, a window into what the industry has been doing for the past century and what it still is capable of achieving.

The Simonsberg in Stellenbosch is to Cabernet Sauvignon what a Baltic State is to Vladimar Putin – a place of impassioned desire, except that Cabernet has conquered the Simonsberg. Decomposed granite and clay soils, plus a northerly face to the Atlantic across a breezy and exposed flat-land makes for some pants-wetting ideal terroir. 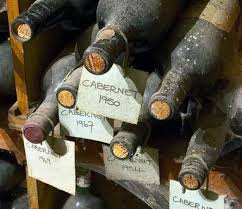 Cabernet Sauvignon loves these conditions, and has done so for generations resulting in an established and natural interaction between nature and vine.

Of Cabernet Sauvignon and Simonsberg you can say that unlike newer varieties in newer regions, these two are done dating long ago and have been swopping bodily fluids for some time. This fluid is aromatic and heady and offers a glimpse into the heart of vivid redness.

Grapes are harvested and sorted to dump any inferior berries. During fermentation the cap is punched every two hours – by hand. The wine goes into wood for a good time and a long time, two years. Of which 60% is new wood and 40% second-fill.

The 2011 vintage will be remembered for being preceded by a cold, wet winter and a spring which saw early winds leading to a fresh growing season before some high pressure air movement from the South Pole caused humidity after veraison. A few muggy days was not enough to cause disease, but resulted in deep-rooted, all-round phenolic ripening of the grapes.

This is seen in the Kanonkop Cabernet Sauvignon 2011. There is less of that lean pine-needle, wet rock character and more plush and spice. The wine is by no means over-done or jammy, rather more like the St Estéphes of the warm 2003 vintage which sported loud patterns and brassy samba rhythms whilst maintaining a disciplined and sculptured authority borne out of civilisation.

An enormous nose of half-raw charcuterie and scorched turmeric leads to an attack on the palate which is as smooth and well-mannered as an invasion by the Swiss navy. After entry, the wine blossoms in the mouth with notes of fig paste, minced citrus peel and a smidgeon of porcini.

The structure shows plenty of backbone, but one which has benefitted from Pilatus and steam-room yoga so as to be flexible and forthcoming. A classic and precious wine, but made for the unashamed joyful experience of taking it in and drinking it up.

Someone’s loss is definitely another’s gain. I want it all.

2 thoughts on “Taking the Cabernet that Moves Mountains”