For a nation claiming to have 20 gazillion years of civilisation, the Chinese really know how to annihilate a piece of good seafood. If it had been some Guangdong mussel or Tianjin squid they were screwing up, no problemo not. But here Mister Pi-Lee Songdong was having his way with a beloved Cape abalone, frying the living bee-jesus out of it before slathering the mollusc with lashings of plum vinegar, oyster sauce and some weird green shit that looked like German pea-soup after the bombing of Dresden.

Seeing this was Casa Pi-Lee, however, I was not going to make a suggestion as to how this piece of cherished seafood – the best in the ocean bar the Blue Point oyster – should be treated. Pi-Lee has some serious Yakuza-like heavies around him, even when he cooks. And we guests were drinking Corton-Charlemagne and getting our necks rubbed by a bunch of Chink babes smoking Marlboro Lights and wearing kimonos, so the party-pooper was not going to be moi. 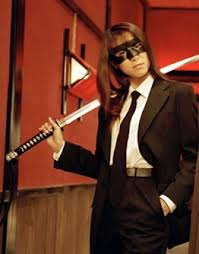 The abalone, however, was a disaster. Rubbery. Smothered in a sickly sweet sauce that had the texture of golden syrup mixed with baboon snot, this was nothing to write home about or get my Chinese immigration documents processed.

There was just one way to make my point, and that was by returning the favour and showing the puppy-eaters how real abalone is cooked.

So a couple of weeks later I scored a couple of abalone from a legal source and invited Pi-Lee and his buddies around to Onrus. Here I had perfected my abalone recipe from an early age and I was dead-set on teaching the Orientals a thing or two.

Thing about abalone, you want it to taste of the ocean. Smell the kelp and oyster shell. Taste the iodine and salty sea-spray. Simple. Pure. Fresh. They can say what they want about we Afrikaners’ taste for brandy and coke, Crocs and overdone T-bones, but when it comes to cooking seafood we kick serious butt. 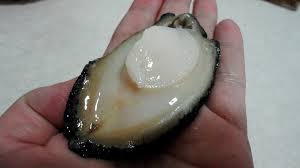 Abalone is shucked out the shell. Scrub the guts stuff from the cream-coloured round pieces of muscular meat. Whack each abalone for a few minutes with a wine bottle, or get one of the Chinese chicks to massage the muscle, something they sure know how to do.

Okay. Then the abalone is sliced in slivers. Place on a sheet of foil. Chuck in a wad of butter, sprinkle with some dry white wine and grate nutmeg over the mix. Cover with more foil and wrap yourself a little parcel. Now, place this directly on smoking red hot coals. For five minutes, And no more and no less. (Note: this recipe came courtesy of Shawn Thomson and Bernard Kotze, main honchos at Du Toitskloof Winery.)

After five minutes, remove foil from coals. Open the parcel. Man, those Chinese wilted when their cute flat noses found the aromas. They had tears in their eyes, tears that made Madame Butterfly look like a Jim Carrey comedy. Loved it. Ate it all up, like Pandas in a sugar cane plantation.

I was supplying the vino and, well, put it this way but I was right out of Corton-Charlemagne so Pi-Lee had to find something else to pour his Sprite into.

My accompanying wine was a smacking good Christina white blend from Agaat Wines, out Wellington way. The blend is led by Sauvignon Blanc (50%) with 30% Nouvelle, 17% Chenin Blanc and 3% Viognier. And what a fine bottle this is. 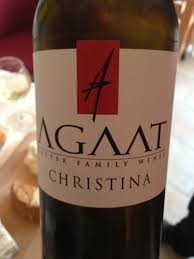 The Sauvignon Blanc adds crispness and acidity, as it tends to do, which provides a mighty fine backbone, especially if you are eating abalone while getting a back-rub from Chinese fingers. But then the Christina’s Sauvignon Blanc spine is coaxed into various directions. The Nouvelle brings a mineral zestiness, while the Viognier leads to a spray of perfume with the Chenin Blanc giving good fruit on the mid-palate.