It was the South African wine industry’s top day, and I was serving breakfast. Of the liquid kind, of course.

This was the 40th Nederburg Auction, week-end past. And at 09:00 on a cool, crisp spring morning the tasting of pre-auction wines attracted hordes of aficionados serious about getting in a last sniff and snort before the bidding started. I was, valiantly and under duress, manning the Rietvallei stand as two of the Estate’s Red Muscadels were up for the hammer: a 1979 and 1980. Both were sweeter than sin and more decadently luxurious than a Russian ballerina in a fur coat, and comrade, did the punters set upon them with gusto. After tasting through some Shiraz, Chardonnay, Cabernet Sauvignon and Bordeaux-style blends, a shot of dreamily sweet elixir was apparently just what was ordered to sink the dawn palates’ sharp tannins.

“Too good to spit, really,” said auctioneer Anthony Barnes MW as he put a shot of Rietvallei away before heading to the Johann Graue Hall for a spot of vino flogging.

Once the gaggle had left, this pre-tasting venue was a fine place to taste the line-up which would eventually achieve this year’s record Nederburg Auction haul. Practising French with the suave Jean-Vincent Ridon of Signal Hill Winery I sipped his fine Antica Cabernet Sauvignon 2000, all toasted pine kernels, young charcuterie and boudin noir.

Paul Cluver’s Seven Flags Pinot Noir 2007 was in racing-horse condition. Supple, muscular, sinewy and with a gleaming coat of spring cherries. The De Wetshof Finesse 1998 was a tribute to Beaune, struck rocks and middle-earth power wielding a basket of Eden-like fresh fruit.

Nederburg wine maker Wilhelm Pienaar showed a line-up of Edelkeur that broke my heart scarcely after sunrise. The 1979 oozing dried apricot, honeycomb and wine-gums, but with a life-affirming perkiness which was almost flirtatious. The 1993 still a pup, but a pretty one full of almond blossom, Kakamas peach and cut sugar cane.

But I digress, the point being that the wines offered for this year’s Nederburg Auction were the finest in the land, harnessed by diversity in style as well as regionality, with the added bonus of being of the relatively mature kind.

For the record, an average litre price of R597.36 was realised. Total takings were just over R7m. A premium of 215% was paid on the average reserve price, up from last year’s 93%. From a numbers point of view, a success thus.

Statistics may impress the suits, but in the bigger scheme of things they have little relevance to the overall importance of the Nederburg Auction. Since its inception in 1975 – one year before Soweto  and deep into South Africa’s reputation as the world’s skunk – the Auction has led the way in providing a platform from which the image of the South African wine industry can be viewed. The setting. The style. The restrained glamour. The tone and the quality of wine on offer and the presence of the country’s product and the country’s wine people. And those people ranging from 20-something sommeliers, spunky wine makers in their 30s, all the way to geriatric retailers one croak away from the last communion. 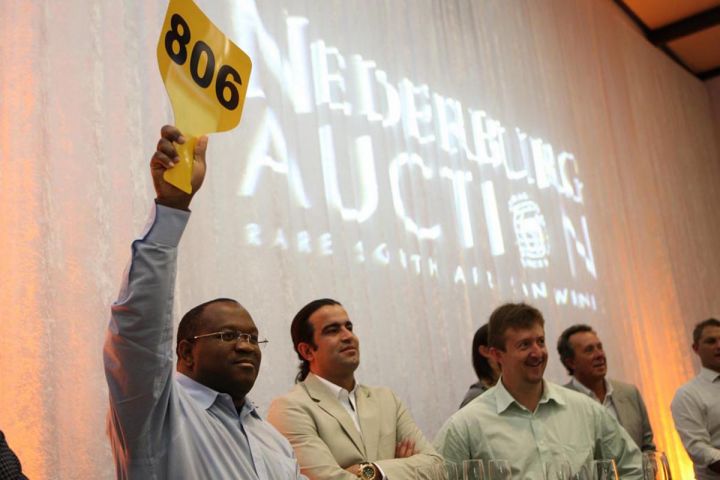 This was us and this was our wine world. Brand South Africa and the Nederburg Auction have become synonymous throughout the globe, as well as in sectors of the country far removed from the cultural and physical source of wine. The organisers, under the hugely competent stewardship of Dalene Steyn, may see the two day event as a builder for the Nederburg and Distell brand. But they are – and of this I am sure – aware that they are custodians of the premier wine event in the land.

A few years ago there was an infantile measuring of dicks between Nederburg and the Cape Wine Makers Guild Auctions when the latter started raking in the big bucks. This is so irrelevant, as the two are nothing but complementary to one another, each with an individual identity and own purpose.

The winner of both is the South African wine industry. And what a bargain is this not.

One thought on “Nederburg Auction Hits Forty with a Bang”