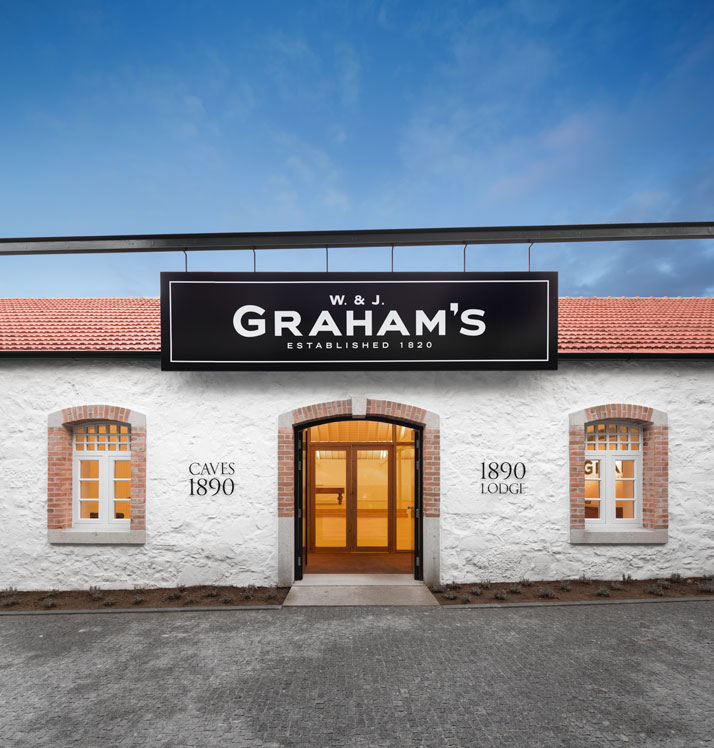 Tradition commands one to stand when drinking a wine older than your person, a custom the calling for which becomes less and less as Father Time crawls along. But yesterday, in Vila Nova de Gaia, Portugal I was on my feet whilst attending a tasting at the great Port house of Graham’s.

Myself and host Isabel Monteira from the Symington family, a British-Portuguese Port dynasty and owners of Graham’s, had just waltzed through a delectable line-up of wines. From Ruby to LBV (Late Bottled Vintage) we struck out to Tawny Territory. Aged in cask, instead of bottle as is the case for Vintages, Tawnies are golden-hued offering scents of spice, tobacco and leather before knocking your tasting tools into a sweet heaven where angels bearing fruitcake, nuts and honey struggle to hang onto their harps.

This is mind-blowing stuff. We powered – kicking and screaming – our way through 10, 20 and 40 year old Tawny Ports, and the interesting aspect was that the older wines actually became fresher and energised as the natural acidity kicked during the later years.

Tawnies were followed by Graham’s Vintages. Here the influence of wood is scant. They spend two years in ancient barrel before being bottled where the real aging takes place, something impossible in good wine without the influence of natural cork. The Vintages were all pups, but the 2000 showed where a truly fine Vintage Port is going with berry-fruited richness and a graceful power with intense, focused concentration.

The 2011 was also shown. This wine has obviously not even got her knickers on yet, but the prediction that she is to be the finest vintage in the Douro since the great 1963 is evident. It is stern, precise and military-like with massive, dense volleys of visceral fruit on the wine, still marching on the ration-pack of the grape spirit used for fortification.

Getting a few bottles to stick away for 20 years might have been the best decision I made since buying an extension to my Citroën warranty and getting my mongrel bitch-inseminating Dachshund Maximillian neutered.

Isabel then led me, as Portuguese ladies tend to do, to the smooth, dark bar counter in the Graham’s Vintage Tasting Room which resembled the rarefied atmosphere of a London Club. Here, standing, the Graham’s Tawny 1952 was produced. Most Tawnies are blended to derive at the age-average required for bottling. But the single vintage of 1952 was kept in wood – namely, the 540 litre old barrels known as pipes – as the wine market was tight in the 50s due to post-war economic limitations.

It was, however, bottled for Queen Elizabeth’s 60th jubilee in 2012 and proves to be the kind of decision to make any stiff upper-lip welt into the semblance of a smile.

The Graham’s Tawny 1952 is poured in respectful silence. It has a beautiful colour – the golden hair of a sunlit Edward Hopper blonde with a faint edge of emerald green. The nose…well, think of a tropical jungle full of burst, ripe fruit where a Buddhist temple is burning incense and freshly-sweated exotic maidens are bearing dishes of spice and sweets. It is that kind of thing.

The palate is balanced, dancing a ballet on pointed toes whilst holding a ballerina aloft in each hand. Gushes of dried fruit, essence of patchouli oil and a delicious sweetness of fine heather honey mixed with drops of spring water smelling vividly of stone and life.

This is why we are obsessed with the juice from the vine, for the chance of wading through the forests of wines, machete in hand and pith helmet firmly strapped, in the chance of stumbling upon something which you know that after having experience it, your love of wine will never be completely the same.

It is only just born.

One thought on “All Rise for the Honourable Graham’s 1952”